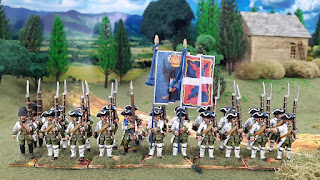 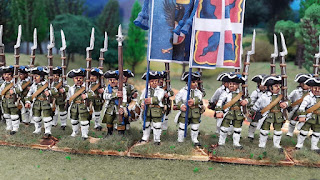 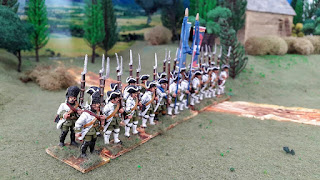 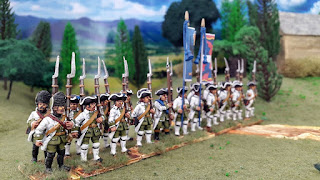 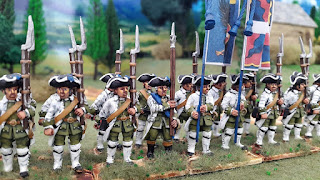 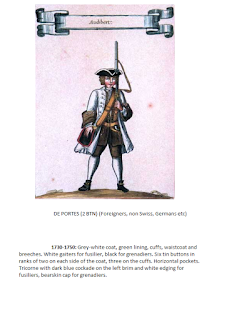 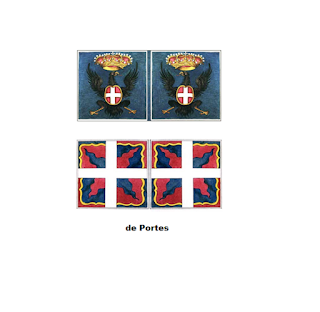 On the 27 October 1703 Duke Victor Amadeus II made a convention with Colonel Ludovic De Portes to raise a regiment of infantry with foreign men, German, Swiss, protestant French, Dutch and British, with a strength of two battalions. [I would imagine that the language of command was Italian]

Service during the War of the Polish Succession (1733-38) The regiment campaigned in Lombardy in 1733 and in the spring of 1734 was present at the battle of Parma and, three months later, at the battle of Guastalla. In 1735 the Regiment marched up the Adige Valley and in September it joined the Piedmontese Army on the West side of lake of Garda supporting the French action on the East side. At the end of the year the whole Army took winter quarters in the country around Cremona and Brescia. In 1735 the regiment changed it’s colonel and became Audibert.

Service during the Austrian Succession War (1740-48) In 1742 only the 1st battalion campaigned in north-east Italy in the Po plains. In September both battalions combined and the regiment marched on the Alps to undertake a campaign in Savoy against an invading Spanish army. In January 1743, after a cold winter campaign ,Savoy was abandoned and the regiment returned again to Piedmont. It remained located there on the alpine front in theVaraita Valley. Posted over the village of Chateau, the regiment participated in the struggle to stop the Spanish autumn offensive. The western front remained the focus of the war for the year 1744 and again the Varaita Valley was the centre of the struggle. The 1st battalion of Audibert fought inside the redoubt of Mount Cavallo (on the 17 July 1744). By that evening the battalion had lost 139 men. Later the regiment was attached to the main Army to break the siege of Cuneo. Maillebois' offensive achieved its acme at the battle of Bassignana (27 September) and Audibert was on the right of Sardinian line, defending the plain before the village of Pietramarazzi.. The follow year Audibert was present in Leutrum's Army. In April there was a new colonel, Jean du Monfort de Varache, and the units was renamed Monfort. Then the two battalions were separated. The 1st battalion fought in the south-west in the Mediterranean theatre during the offensive in Provence (30 November 1746 to 3 February 1747).

At the end of the war, in 1752 Monfort revised it’s rules and new rules permitted the enlisting of Italians. In 1769 new regulations forbade the recruitment of Protestant soldiers. In 1769 the regiment changed Colonels again and it became De Sury.