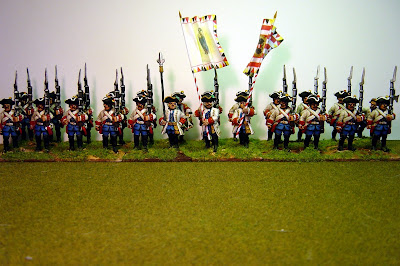 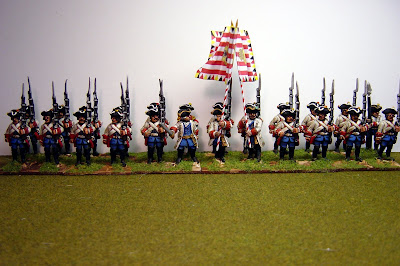 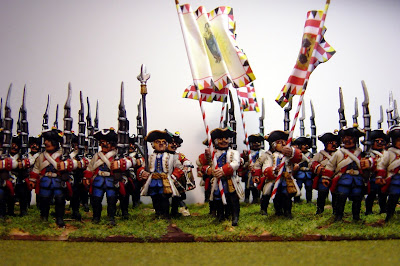 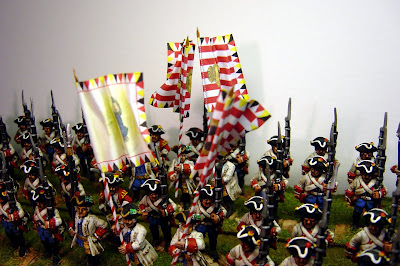 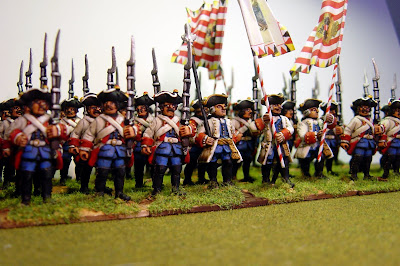 This is a splendid regiment and the only one in Austrian service with this double colour scheme. This is certainly a WAS uniform that might well have lingered on into the SYW. For more on this regiment see Christian Rogge's blog at this link http://crogges7ywarmies.blogspot.com/2010/04/battle-of-mollwitz-1.html
for inspiration in coupling this unit with these spectacular flags. These flags certainly existed but, as far as I know, there is no reason to assume that they were carried by this particular regiment. On this subject of the flags, I have created a special Leibfahne for them to match up with their Regimentsfahne. Its also worth looking again at the Roechling print of the Battle of Hohenfriedberg that I posted here on the second of this month – this red and white striped flag is shown being presented to Frederick II by the white-coated Prussian dragoons, along with others that have been captured on that day. Note too the great variety of flags supposedly being carried by the Austrians on that day. (NB This red and white flag is illustrated in colour on the back of the Greenwood & Ball Austrian booklet http://www.18thcenturypress.com/syw.html)

I have again given them the white-green cockade (about which I speculated in an earlier post), the old drummer's dress of reversed colours, and these very early WAS flags.

A further eccentricity of this regiment was the fact that both Officers and NCOs did not have red lapels but rather none or white. In summary, this regiment looks perfect for 1743-45. Everyone with an Austrian mid 18th century army needs these guys as they look so un-Austrian!
Posted by Painted Soldier at 12:20 5 comments: 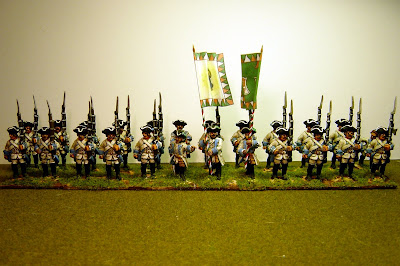 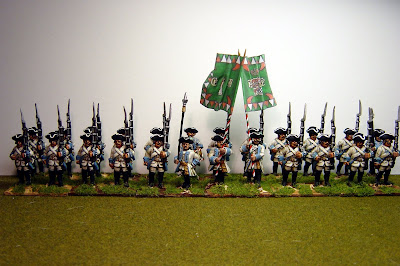 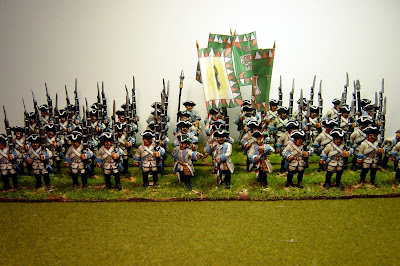 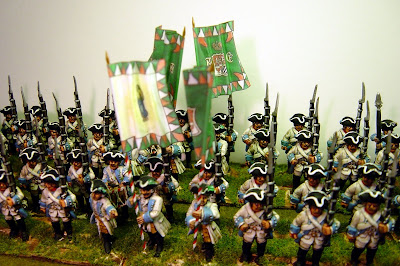 This regiment was 'Hessen-Cassel' in the WAS but by the SYW was called Baden-Durlach.
I have given them the pale blue turn backs they sported in the earlier period as well as the white/green cockades for officers (see my earlier post on IR 18) and the Green flag (M1744) which was introduced to replace the Imperial ones when those fiendish Wittelsbachs made their dastardly grab at the Imperial dignity. I guess my adjectival use might give a hint as to which side of the fence I rest.
Thus this regiment looks spot on, I think, for about 1755 as the drummer has changed over to a white coat as per the official instructions of that year – i.e. non-reversed coloured coats. This uniform could well (minus the cockades?) have been in use through much of the SYW. 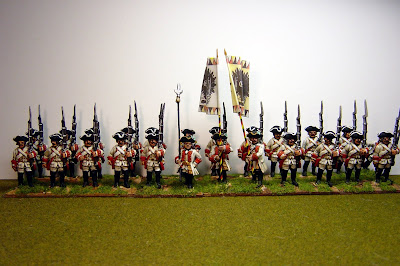 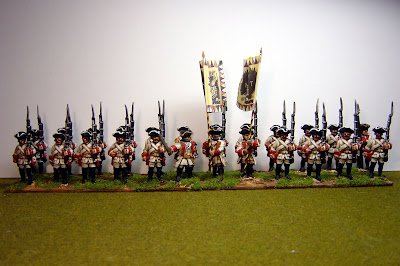 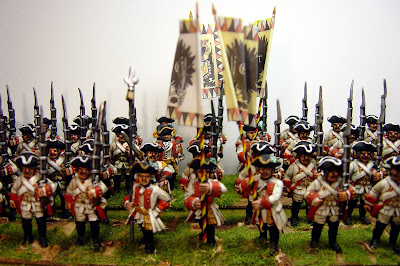 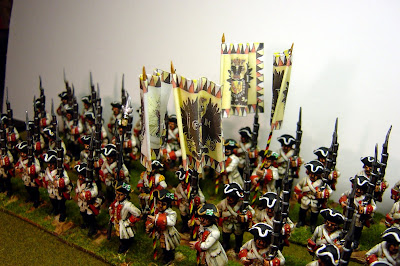 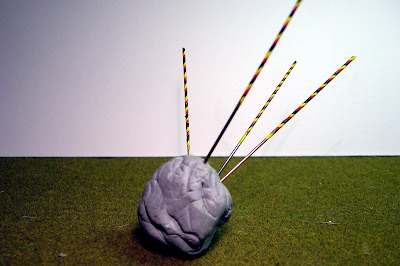 Two battalions of one of my favourite Austrian regiments. The figures are a mix between Crusader and Front Rank to give variety. (Please note the numbering system was introduced only in 1769 but for convenience I am using it here.)
I have given them red turn backs as was likely in the earlier period. Red and white is the classic look to Austrian infantry, don't you think? In fact this regiment is so popular (with me, anyway) that I have it in 40mm too. They proudly carry the M1745 flags.
One strange thing is that Kronoskaf mentions white/green cockades for Officers. This is very odd as they certainly used the more common black cockades in the SYW, or so I thought. I can only imagine that the white/green ones were possibly used in that tiny non-Imperial phase between 1743 and the summer of 1745 when the Wittelsbachs grabbed the Imperial dignity. This use of green would coincide with the introduction (if ever so briefly) of the new Green flags issued in small numbers to replace the old Imperial ones (see post to follow shortly on IR 27).
The regimental inhaber was Ernst Dietrich Reichsgraf Marshall von Biberstein. This regiment looks right from about 1755 to the beginning of the SYW, although the coloured cockade might mean an earlier start date if my speculation on the cockade colour holds true.
------------------------
How I paint spiral flag staffs:
1) Paint two thirds in the lightest colour (in this case yellow) starting at the bottom. The flag itself will cover the top third so don't bother to paint this at all.
2) Once dry, I work on the black starting from the bottom and turning the staff. I'm right handed, so the pole is in the left hand and I'm continually turning it while the right hand, with the brush is giving small brush strokes. If, as in this case, there will be a third colour, make sure the gap between one black line and the next black line is double thickness. The angle of the spiral you will get with practice - if this task has not driven you potty first.
3) Once dry, insert the third colour. In this instance I have put it immediately below the black.
Normally I will now only need to touch up the base colour (yellow in this case) as there is always the odd mistake.

4) Rest! Don't stress about the result – lets face it you have had a good stab (hopefully) at one of the most difficult things to paint!
NB: I assume you have a separate metal rod for this because if the flag pole is attached to the figure I would not even try this. That way lies lunacy.
Posted by Painted Soldier at 09:45 2 comments:

Labels: How I paint...., SYW Austrians 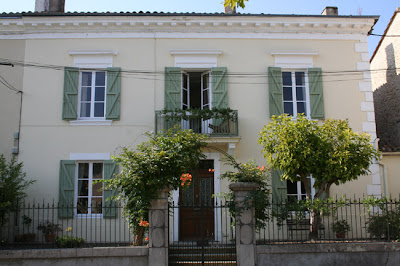 This was the title of a TV programme that ran in the UK (and perhaps the USA) in the early '90s, which was hosted by David Frost and the irritatingly mid-Atlantic Loyd Grossman, who went on to make spaghetti sauces! In the programme you had to guess who lived in a particular house and, if you will be good enough to go to the 'Links' section on the right of this blog, you will find a link called 'My House is for Sale'. This is all a very tenuous method of telling you that my house is for sale and while you don't need to guess whose house it is (after all, I have already told you) you could, if you scanned down through the pictures, find yourself having, as the French say, a 'coup de coeur.'

I must apologise to you for such blatant commercialism – it is quite unlike me. But in these days of financial woes in the Euro zone, one has to do whatever one can to sell property. It would make someone a wonderful holiday home and comes complete with a wargames attic with a table that is over 20' x 6'. Furthermore I would, for additional consideration, be prepared to leave almost all the furniture and fittings. Of course I don't expect to sell to a wargamer, but you might know someone who is house-hunting in France and you might, if you were feeling great generosity of spirit, kindly pass these details on to them.

Rest assured that if I sell my home, I will continue with my blog and my wargaming.
Posted by Painted Soldier at 10:25 3 comments: 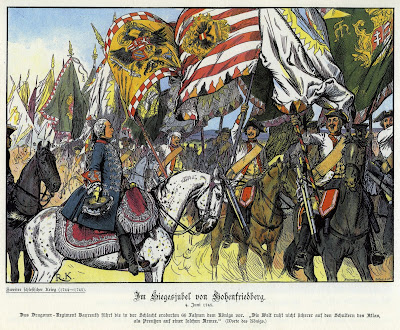 I posted earlier on today and then deleted the post! Mark Sims, of Crusader, had sent me a link to his new Napoleonic rules (called 'March Attack') and I had assumed that he wanted these circulated. That was not the case so my apologies. If you were lucky to download, prior to my deleting that post, then you had a lucky day saving yourself about $10.

More importantly, we discussed his sculpting projects for 2012 and the news is that there is a very good chance that he will be returning to the SYW ranges (Rank and File) in the second half of 2012.

At present there are 5 armies represented:

So perhaps, if the SYW is of interest to you in 28mm, you might consider letting me know what you would like to see. I think it is his intention to finish the unfinished nationalities rather than starting on new armies.

The Roechling print is relevant - I'm painting Austrians at the moment and will show you three regiments, including the ones carrying the red and white striped flags, by the end of the week.
Posted by Painted Soldier at 19:32 2 comments: