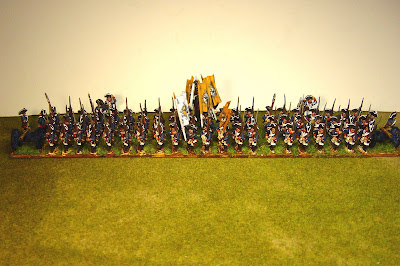 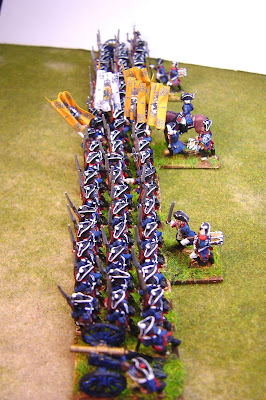 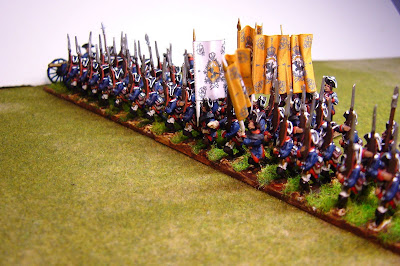 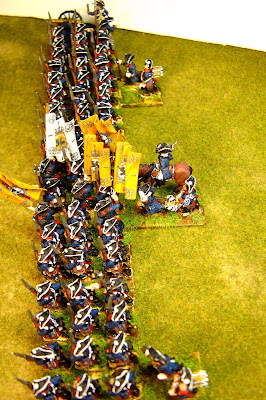 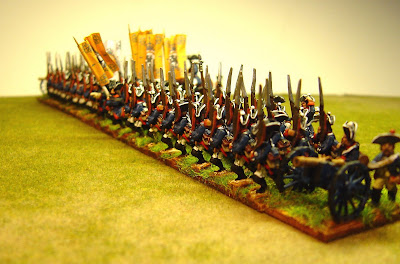 I’ve been meaning to paint up a SYW Prussian battalion in the ‘grand scale’ for some time now. By ‘grand scale, I mean as numerous as possible. I tinkered with doing 5 companies of 23 figures and have ended up with three bases making a total of 69 figures plus a mounted officer and two battalion guns, one at either end. This works out at a ratio of about 1:10.

The idea was to be able to see what it looked like in three ranks, to see battalion guns at both ends and so see the full glory of all five flags. There was no question of doing this in 25mm as a battalion would take up too much space. To me, a battle with just a few battalions per side is just a glorified skirmish and so, if I decide to continue with this and make it a project, then I’d want at least 25-30 battalions and a similar number of squadrons of cavalry at about 12 figures each. This led me away from 'God’s own scale' of 25mm to 15mm. But am I falling into that old habit of biting off more than I can chew?

Now I have always liked Old Glory’s SYW 15mm range – back in the 1980’s I had huge 15mm SYW armies, all of which have long since been sold but some of which might be coming home! More about that another day. The other thing I really like are Eureka’s SYW range – in particular the one-piece casting cavalry which are on splendidly large horses. So, for reasons of economy (OG are much cheaper) I can see a large project developing here using OG infantry and Eureka cavalry. The other advantage is that Eureka will supply their horses on their own, if you ask them nicely, and so OG command bags can be re-mounted. Frankly the only disappointment in the OG range is that their cavalry is mounted on pigmy horses, well pigmy when put side-by-side with Eureka’s.

This is, at the moment, just a mini-project – a ‘see-if-I-like-it’ effort. I have ordered some Austrians and will soon paint an Austrian battalion in four ranks (four flags as I’m going with a WAS organisation of 4 companies) but with the forth rank on its own base so that I can redeploy post-Kolin into three ranks. As I use computer rules (C&G II) the number of bases is irrelevant as one inputs the number of men in the battalion and the number of companies/platoons as was historically correct. Companies were organisational entities in this period and of no importance to firing which was normally done by platoon or division of platoons.

Prussian battalion carried five flags in this period (one per company) and these were grouped in the middle of the battalion in a manner like a 5 on a die. What I don’t know is where the Leibfahne was within this system. I have placed it at the front and on the right, the position of honour (and at the suggestion of Christian Rogge) but it could also have been in the centre. Because this is the first battalion, there is one Leibfahne and 4 Kompaniefahnen. I have chosen to depict IR 1 Winterfeldt as, in my eyes, it was the classic Prussian uniform.

I still like 25mm of course (there is a very satisfying weight to each base and the uniform detailing is much more evident and fun to paint) but I have dozens of 15mm houses so gaming 15mm will not involve additional cost in buying more terrain. Do please let me know what you think.

Posted by Painted Soldier at 10:09 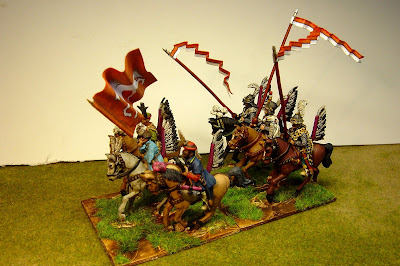 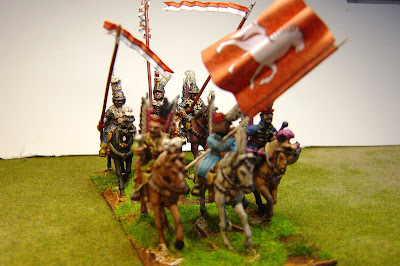 This is the second unit of winged hussars in the right wing cavalry force. There is only one unit left to paint and when the wing is ready I'll picture it here in all it's fluttering colourfulness.

You must think I’m slacking somewhat showing a weekly painting total of just six measly cavalry! Actually, I have been working on another small project as well and I will post pictures on Sunday just to prove that production remains steady, despite the sunshine that is flooding every nook and cranny of SW France as I write this. 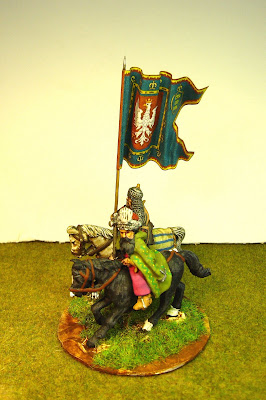 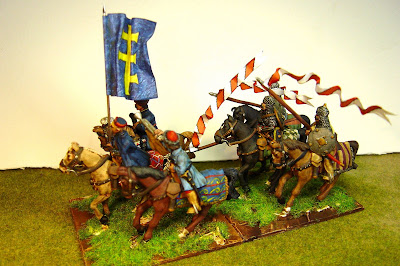 The Polish army moves on. The top picture shows General Jan Holowczynski who commands the right wing cavalry. He is a Foundry figure next to a TAG standard bearer or pancerni lancer. Although the Foundry figure is slightly smaller, the difference is acceptable.

The bottom picture shows more Foundry figures – a Cossack skirmishing unit. The Cossacks are some of the nicest Foundry (Copplestone) figures available.

I’ve been busy painting up background stuff the last few weeks by which I mean Gallic slingers and archers for the game we will have next month. They are Old Glory figures (cheap and nasty) and certainly not good enough to show you. But I needed thirty of each for the Sotiate Gallic army and these were the cheapest available. I have not enjoyed painting them but such are the woes of duty!

I’m hoping that all the Polish right wing cavalry will soon be finished. Considering we are only talking about 60 figures I must admit to myself that I have created a mountain out of a molehill and been lacking somewhat in courage and fortitude. I think that is because I wanted to do a 'good job' and these colourful fellows have been taxing. No more excuses otherwise I will have to dust off the hair suit! 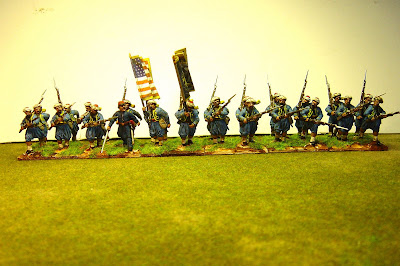 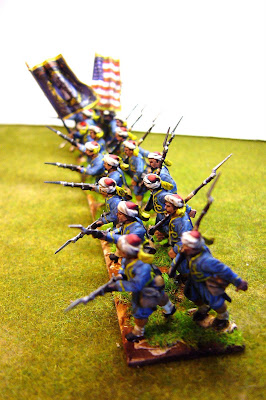 This unit is the146th New York Zouaves from the ACW. The uniform was obviously based on the French 'Turcos' uniform and these chaps surely must had stood out on the battlefield. This completes the Zouaves from the Perry plastic box.

I have just finished putting 31 lots of SYW French onto eBay. I'd love them to go to one home but I don't imagine that that will happen but please have a look. All have been painted by yours truly and took a very long time to complete. The first item number is 110658890827. Thanks for looking.
Posted by Painted Soldier at 17:13 3 comments:

Dillon, Rooth and a gift for you 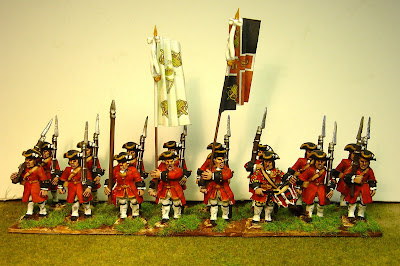 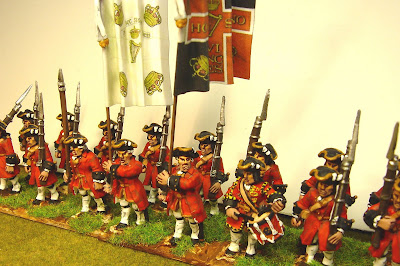 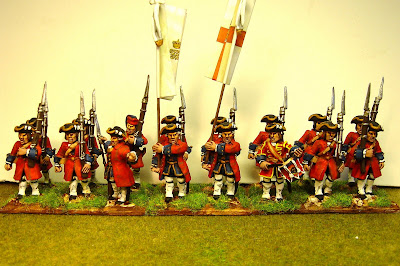 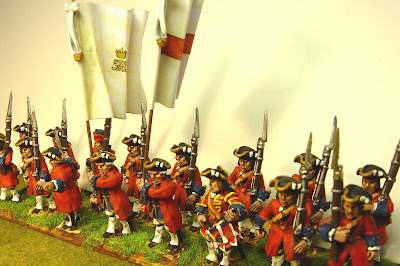 I feel I should reward you in some way – that is if you can call what I am going to suggest as a ‘reward’and not a blight or a blot on the landscape. I’d like to paint up a unit of wargames figures for free to the first two readers who drop me an email. A unit of 15/18mm or 25/28mm infantry or cavalry – you supply and post the figures to me, I’ll paint them and post them back to you for free. My painting schedule is quite heavy but I promise I will paint them this year! I will be happy to discuss the project but reserve the right to paint only those periods that appeal to me and to paint only figures that I like.

On another subject, I will be selling most of my SYW French/Allied figures quite soon on eBay. I’ll be starting off this coming week with the French and when they have been sold I’ll move on to the much larger Allied/Pragmatic army. I’ve learned a lesson about myself with this project as it was always too ambitious for me having to paint both sides and I’d rather concentrate on smaller armies. In all honesty I’ve become a little bored with them and I have the glint of Napoleonics (my first wargaming interest) in my eyes.

I’m sure I will return to the SYW at some time in the future.

I’ll post next week with the eBay auction numbers. Meanwhile here are two more battalions of Irish – Dillon and Rooth. Dillon has black facings and Rooth has blue. The figures are by Foundry and that completes a full Irish brigade of four battalions. These are, by the way, the figures that lean to the left when you buy them. To cure this problem I’ve inserted a small wedge of cardboard underneath almost every figure to bring them to a more visually appealing vertical. These will be in the coming auction.

The 'competition' is now over as I will be painting units for Seb and James so sorry folks!