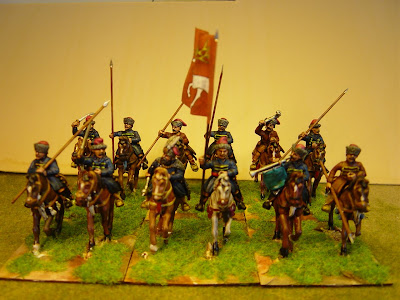 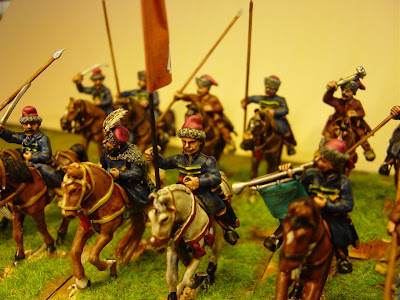 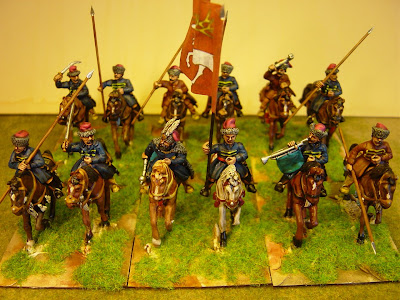 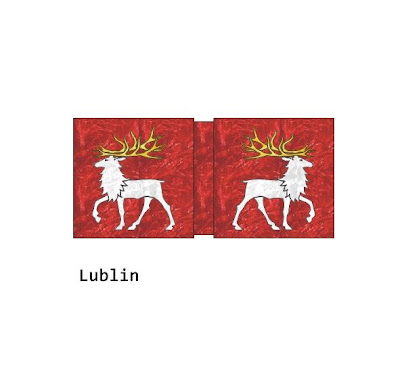 July has been a month of miscellaneous painting and that will continue in August. One day or week I’ll post some Thracians, the next some Polish Renaissance.

Here is a unit called the General Levy of Lublin for that Polish Renaissance army (circa about 16430-60). This is the forth unit of five that will make up the right wing cavalry as follows:

The top three were painted some time ago and you can see them in the index on the right under Polish Renaissance. This unit, and the General Levy of Przemysl to come, consisted of cavalry raised by some magnate or other and I have painted them with some semblance of regularity. I have no source as to how these might have looked but I have assumed that a rich landlord has contributed the core of the unit and given them blue coats and others have chipped in with other contributions dressed in brown. I admit it is entirely my conjecture without historical foundation. They are equipped with light lance, side weapon and bow. They will be somewhat erratic in behavior, I suspect.

The figures are by TAG but all those with lances are conversions, which I have discussed in a previous post.

Once the right wing cavalry is finished it will be time to fill out the ranks of Haiduks.
Posted by Painted Soldier at 10:05 1 comment: 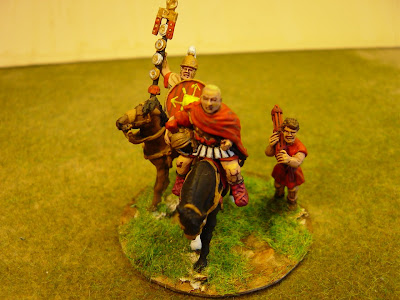 This vignette, from 1st Corps, shows Gaius Julius Caesar with a lictor. This will be used to represent Publius Licinius Crassus on the battlefield. I’m knee deep in Colleen McCullough’s magnificent series of books on the Roman Republic. I’m reading the sixth of the seven currently in the series (The October Horse) and anyone who has read them will know that Caesar’s horse was called Toes.

If you have not read them and you have an interest in the ancient world, I can’t recommend them enough. This is, in fact, the third time I have read the series.
Posted by Painted Soldier at 09:49 1 comment: 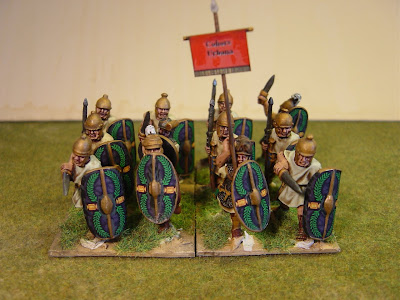 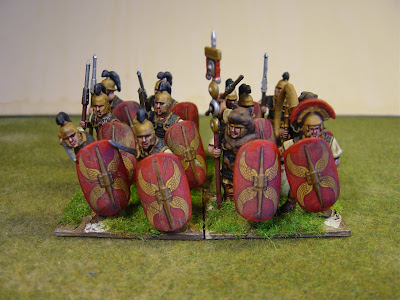 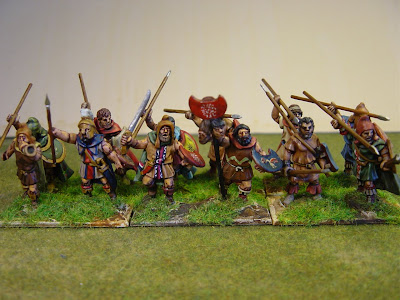 First up is the second cohors urbana of Narbo Martius (figures by Foundry and command by 1st Corps). These two cohorts consist of re-enlisted veterans who have been living out their twilight years on the French coast – sun loungers, wine and sandy beaches. Narbo Martius (present day Narbonne) was the first veteran’s colony established in Gaul.

Next is a cohort of Legio VII. The remaining cohorts are marching in from ‘over the seas’ and will be arriving shortly. Figures are from Wargames Factory who have improved somewhat since this, their first product.

Lastly, although I think it improbable that Thracians were serving under Publius Licinius Crassus, I happen to have a unit of twelve figures and it would be a shame not to use them. My justification is that the Ancient world was probably full of mercenary bands wandering around looking for work. Spain had been through its Sertorious wars and I’m speculating that this band of cut-throats was ambling home, via Gaul and Italy, when en-route, our Publius made them an offer they could not refuse. Figures are Foundry but with Crusader command.
Posted by Painted Soldier at 09:27 No comments: 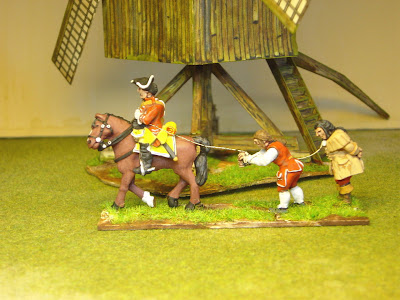 Foundry produce, within or alongside their SYW British range, a few packs of highwaymen and smugglers. The rear two figures come from that latter range and I’ve decided to use them to represent deserters from the Allied/Pragmatic army, or to be more specific, deserters from the 37th Foot (Stewart’s). They have been captured by a dragoon from the 6th Dragoons (Inniskillings) and he is taking them (or actually dragging them) towards their just deserts!
Posted by Painted Soldier at 14:02 3 comments: 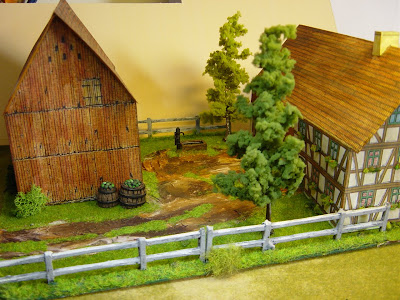 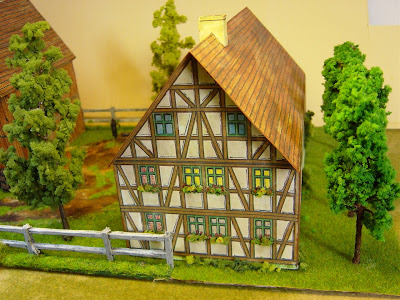 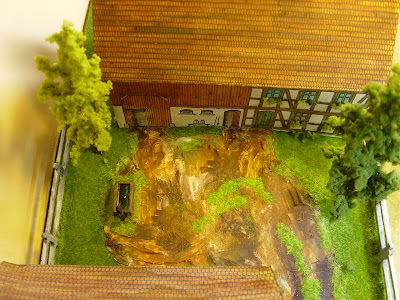 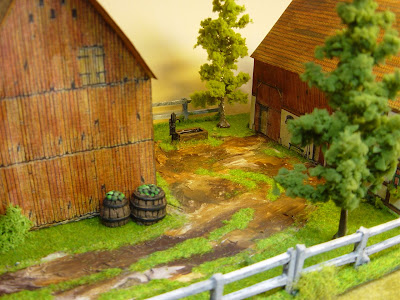 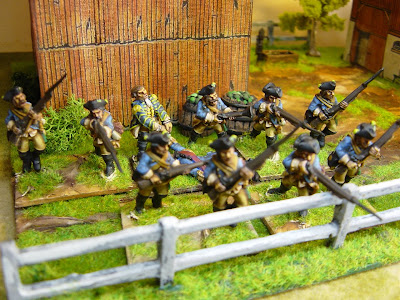 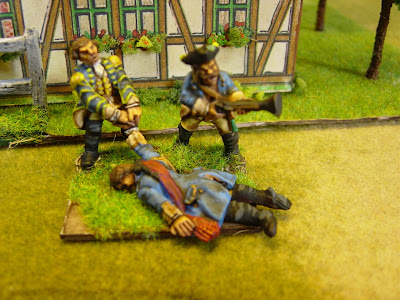 This is the latest farm - larger than the previous one, with two buildings, apple barrels, fences and water trough, all from Hovels.

Lurking in the farm is the Légion Britannique 1st Btn, with light blue coats and buff facings. I've used the Army painter on these fellows to give them a campaign look as befitting their busy role. You might call them the scum of the earth as they are made up, largely, of deserters and they enjoy a good pillage. The bottom picture shows an unusual Foundry vignette of a wounded officer being dragged by a drummer ( the drummer's uniform for this unit is unknown so I have speculated) whilst being guarded by a fierce looking sergeant with bunderbuss.
Posted by Painted Soldier at 08:50 1 comment: 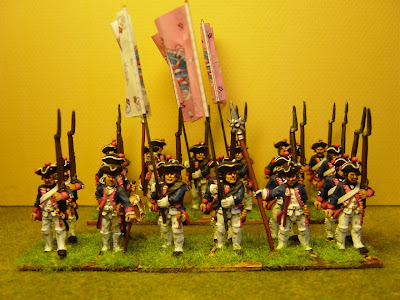 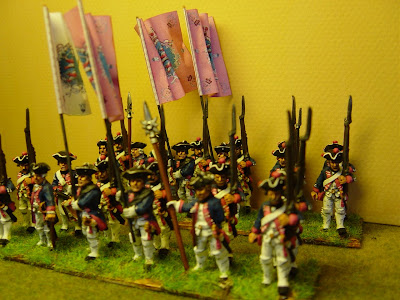 This regiment completes the regular line units of the Allied Pragmatic Army. They are missing their finials and tassels but that will have to wait until my next order to Front Rank. The First Division or Column (and indeed sometimes called “Corps”) contains 8 battalions, the second, eleven battalions, and the third contains twelve battalions, for a total of thirty one battalions. We’ll have a review shortly – I’m waiting for some flags from GMB before I can do that.

I’ve also found some extra figures so I’m going to paint up two additional light battalions to serve in the advance guard next to the three Jaeger regiments - Légion Britannique 1st and 3rd battalions. Once they are done, I’ll return to the French infantry and complete the first column.

I’m also working on the next farm and that should be up on this blog by the weekend.
Posted by Painted Soldier at 13:14 No comments: