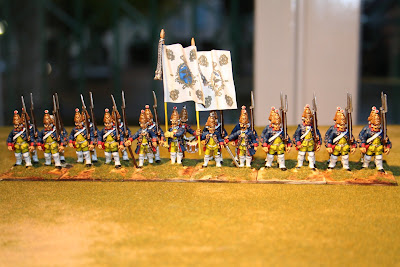 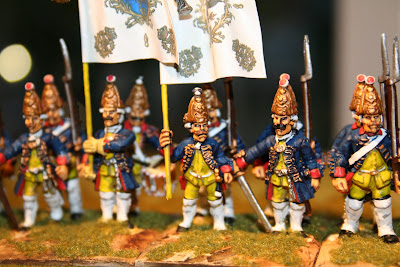 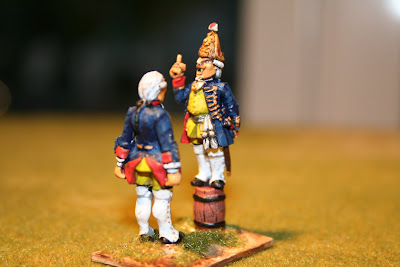 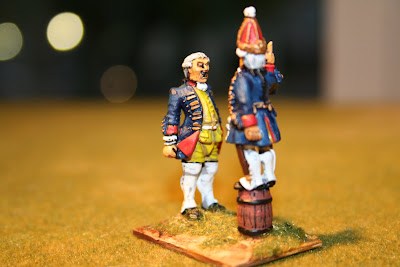 I bought these figures from Foundry back in 2007, painted them and sold them on eBay. I think they are in happy retirement somewhere in the USA and if anybody knows of any particular battle they have featured in I'd like to know. I hope they did not run away at the first whiff of canister....
I'm showing the pictures to both compliment Foundry and to criticize them. The vignette is charming - a diminutive officer reprimanding a ranker for something terrible. Maybe there is a hair out of place on his head. But, on the other hand, Foundry make big mistakes. The officers are all wearing the mitre and they did not - they wore the tricorne. Its such a pity as these figures were a delight to paint!
Lastly, I must confess to having problems with the colour of the trousers. Prussians normally wore trousers of two colours - white and straw yellow (occasionally, but rarely, pink too). Getting the correct shade of yellow or straw is difficult as illustrations available show shades from violent bright yellow to a pale cream. In this 28mm battalion I used a yellow but in retrospect I'm not happy with the shade and when I painted the same regiment in 40mm (see another earlier blog) I went for a much subtler cream which I think (but have no firm evidence for) is more likely. Posted by Painted Soldier at 13:39 No comments: 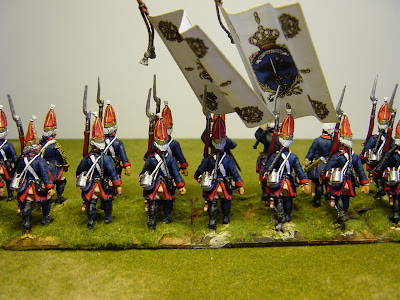 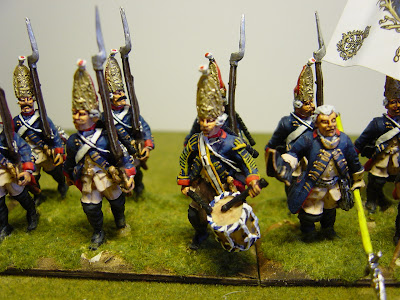 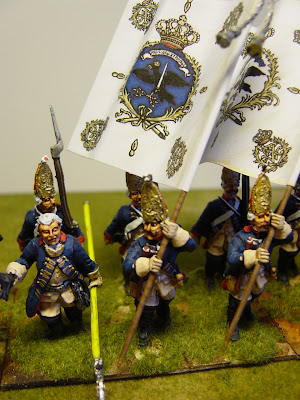 I've finally finished this elite regiment of the SYW Prussian army - IR6 Grenadier-Garde. Its 40mm Sash and Sabre figures and 30 strong (5 companies of 6). I wish S&S would do a variation of the officer figure as I'm running out of convertion options.
My 40mm army now has three finished Prussian battalions and 3 part-finished Austrian battalions - I'm just waiting for the Hungarian command to finish them off. I look forward to doing some cavalry when they are released.

Posted by Painted Soldier at 13:22 No comments: 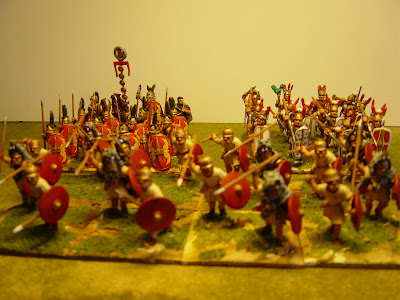 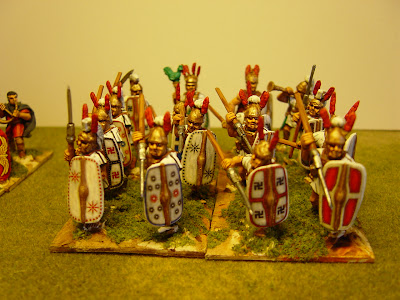 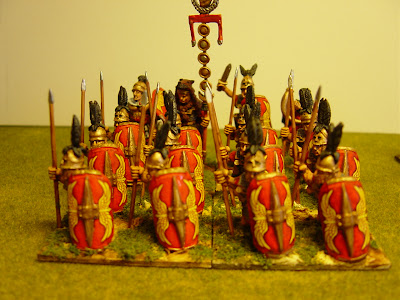 Here are one maniple of kneeling Triarii (Renegade), one maniple of an allied Samnite Legion (A&A figures) and a maniple of Velites (Renegade). All are of 16 figures.
I also have a lot more unpainted figures which I'm happy either to paint up to match the above or sell as raw unpainted metal. There are enough Samnites to make a full legion and I have enough Triarii for another maniple. Whover buys these will also get a free painted Mounted General. The guide price is £5 a figure plus p/p.
Any interest, please contact me at nigbil@free.fr

Posted by Painted Soldier at 15:17 No comments: 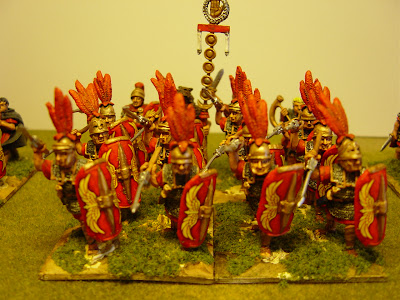 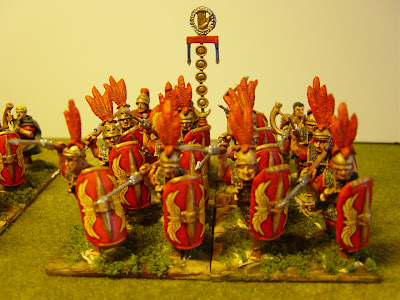 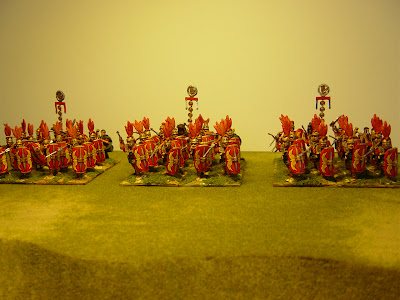 Here are three maniples of Principes, each maniple consists of 16 figures, and these form the second line of my Republican legion. These are all for sale so please see details in my earlier bog.

Posted by Painted Soldier at 15:13 No comments: 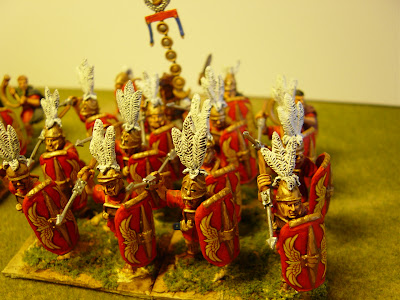 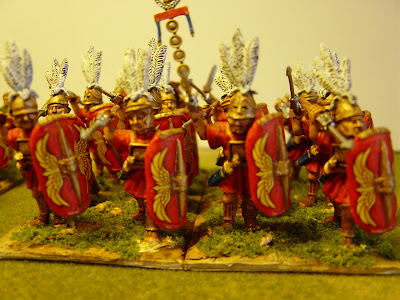 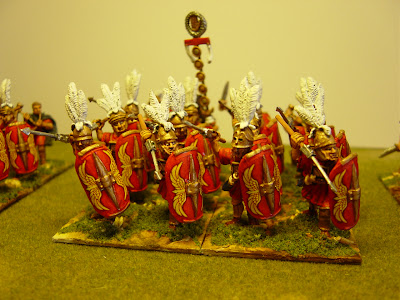 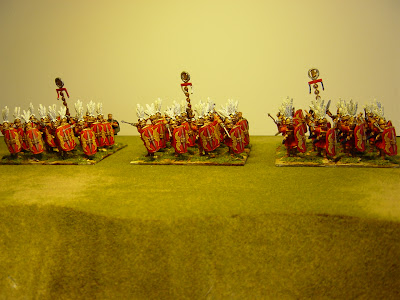 Today I want to show you pictures of a Republican Roman army that I must reluctantly sell.
The pictures above are of three maniples of Hastati (each maniple contains 16 figures, including 4 command). The figures are all Renegade and are 28mm. LBM shield transfers have been used.
They are based for WAB in blocks of 4 (45mm x45mm) and I'm also happy to remove them from their bases and send them to you unbased (at no extra cost) if you'd prefer that.
The next blogs will show the remaining troops, Principes, Triarii and a maniple of allied Samnites.
I'd prefer to sell the whole army to one person but will split it up if necessary.
If you are interested, please email me at nigbil@free.fr

Posted by Painted Soldier at 14:54 No comments: 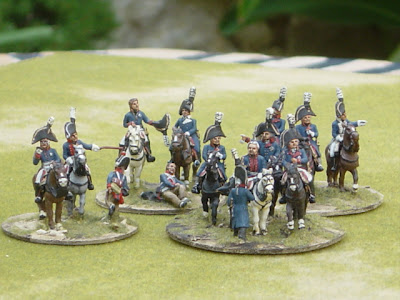 This picture shows the Prussian high command of the 1806 army using AB figures.
On the left are two command bases for generals of division. Two mounted officers plus, in one case, a infantryman running away, and in the other, a wounded infantryman. At the rear right is a round base with three figures representing Field Marshal Mollendorf - the Prussian army at Auerstadt was plagued by a large number of senior officers with little to do but get in the way.
Mollendorf was from the generation that served Frederick the Great so he was a very old man by 1806.
The last group consists of the army top-brass. The King, bare-headed, is being briefed by an officer on foot. He was nominally in charge though the real commander at the battle, until his death, was the Duke of Brunswick (on the King's left).
The only figure missing from the command pack is Blucher himself who is wearing hussar uniform - the uniform of his own regiment.
Lastly, note the shade of red used. It was a dark wine-coloured red.

Oh, and I forgot to say that I have painted the figures to represent people as I saw fit at the time. I liked the bare-headed guy so made him the King. I have no idea which figures are which, in the mind of Tony Barton the designer, so the decision is entirely yours.
Posted by Painted Soldier at 10:50 2 comments: