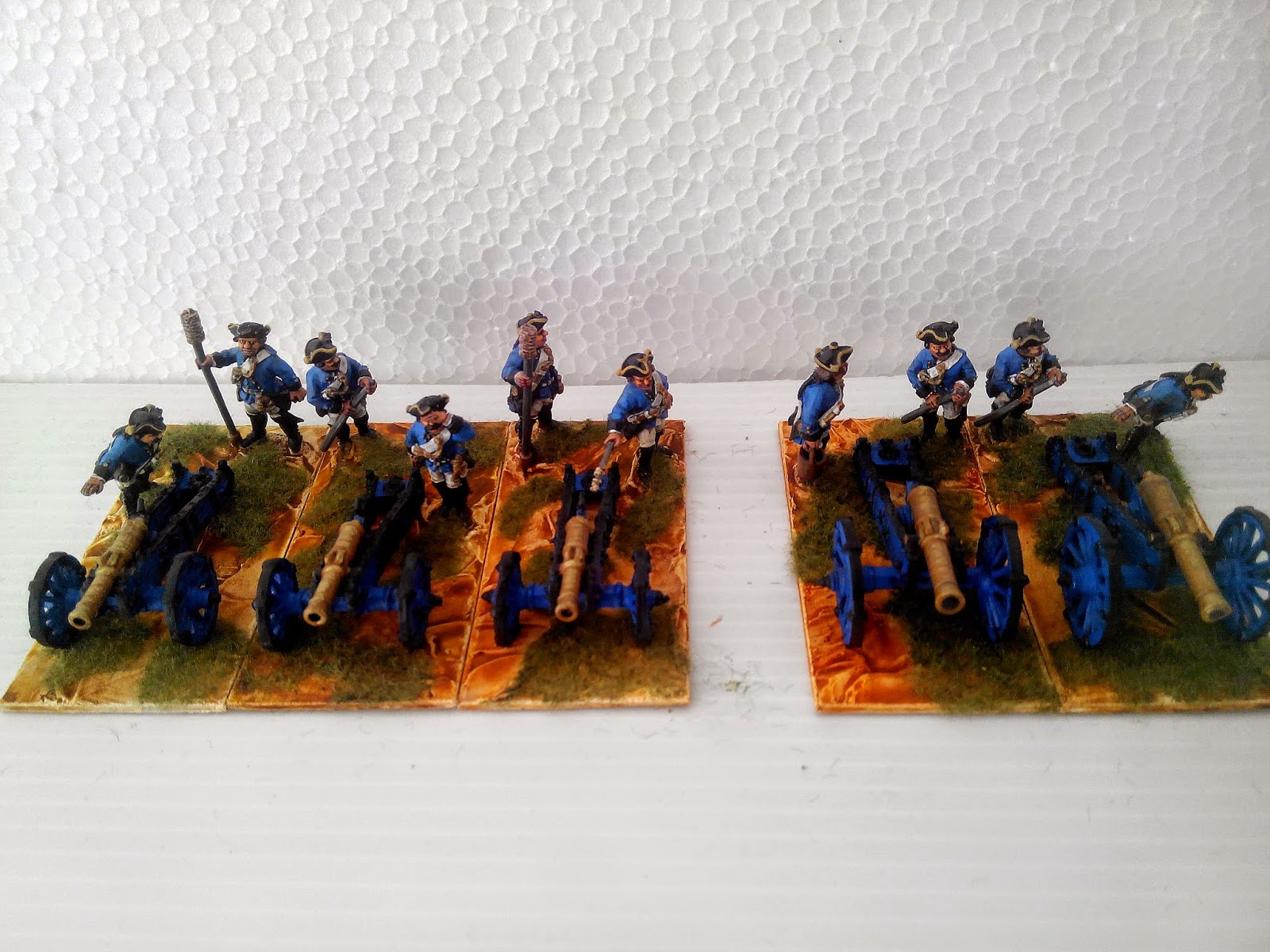 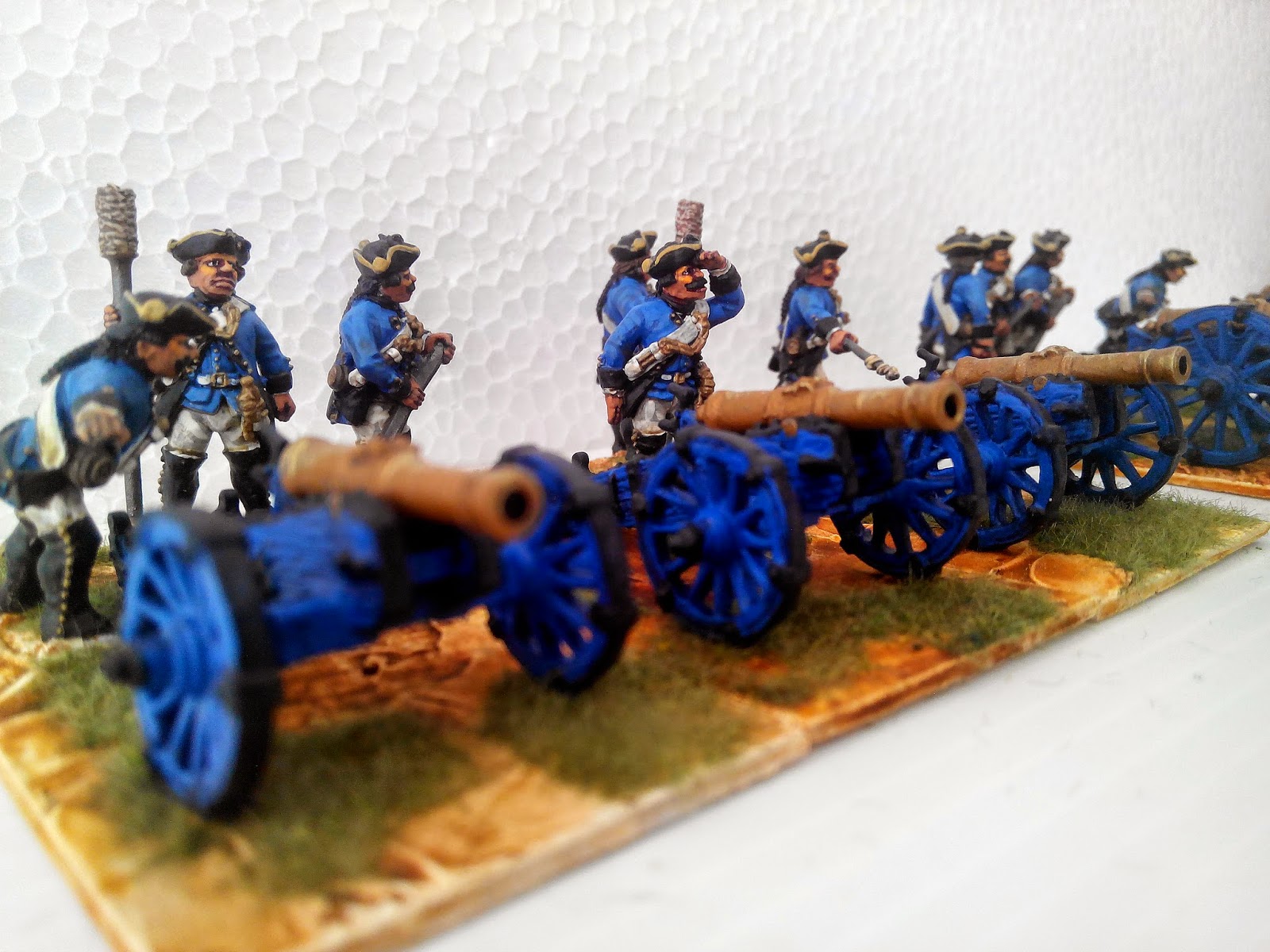 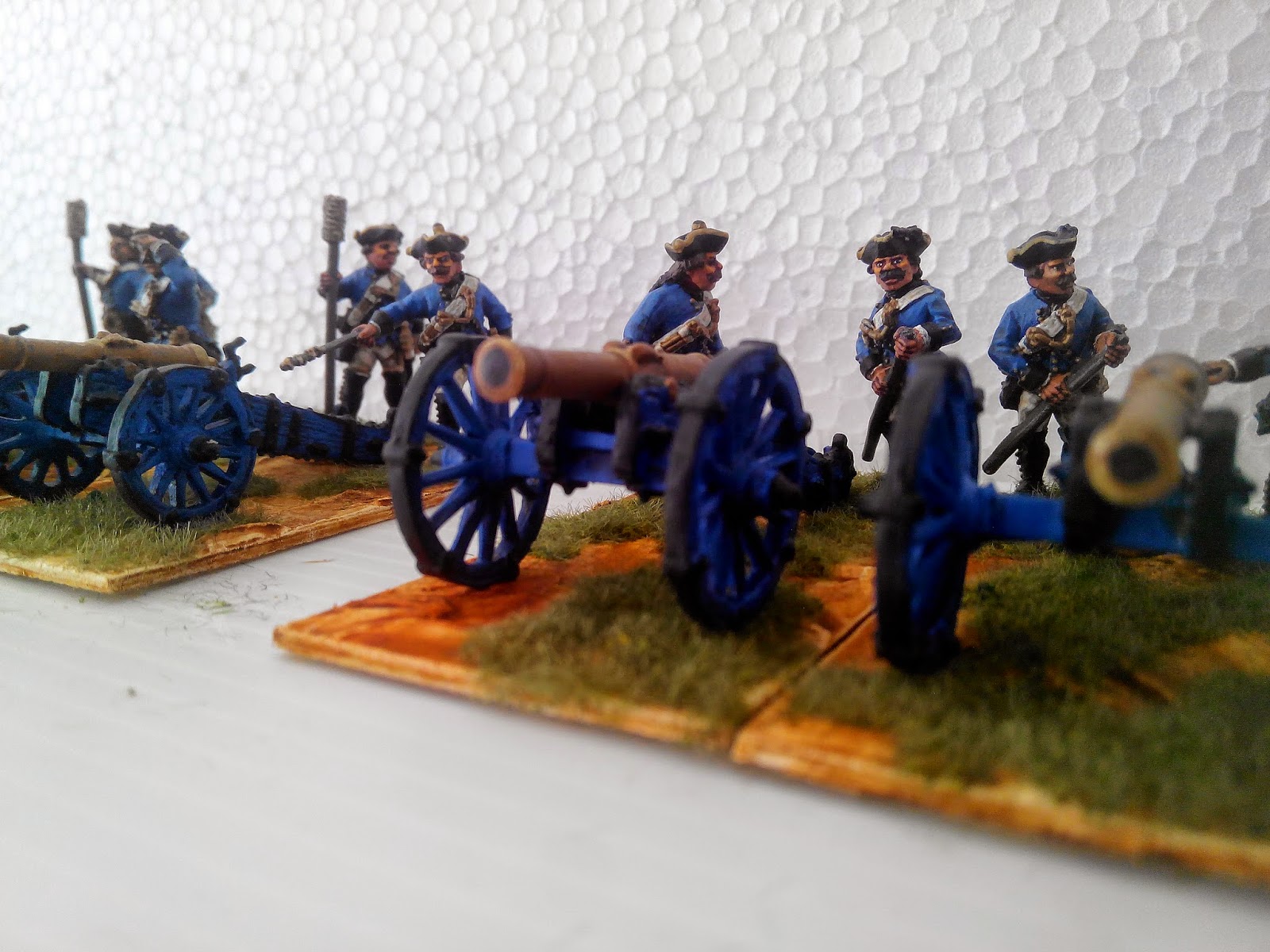 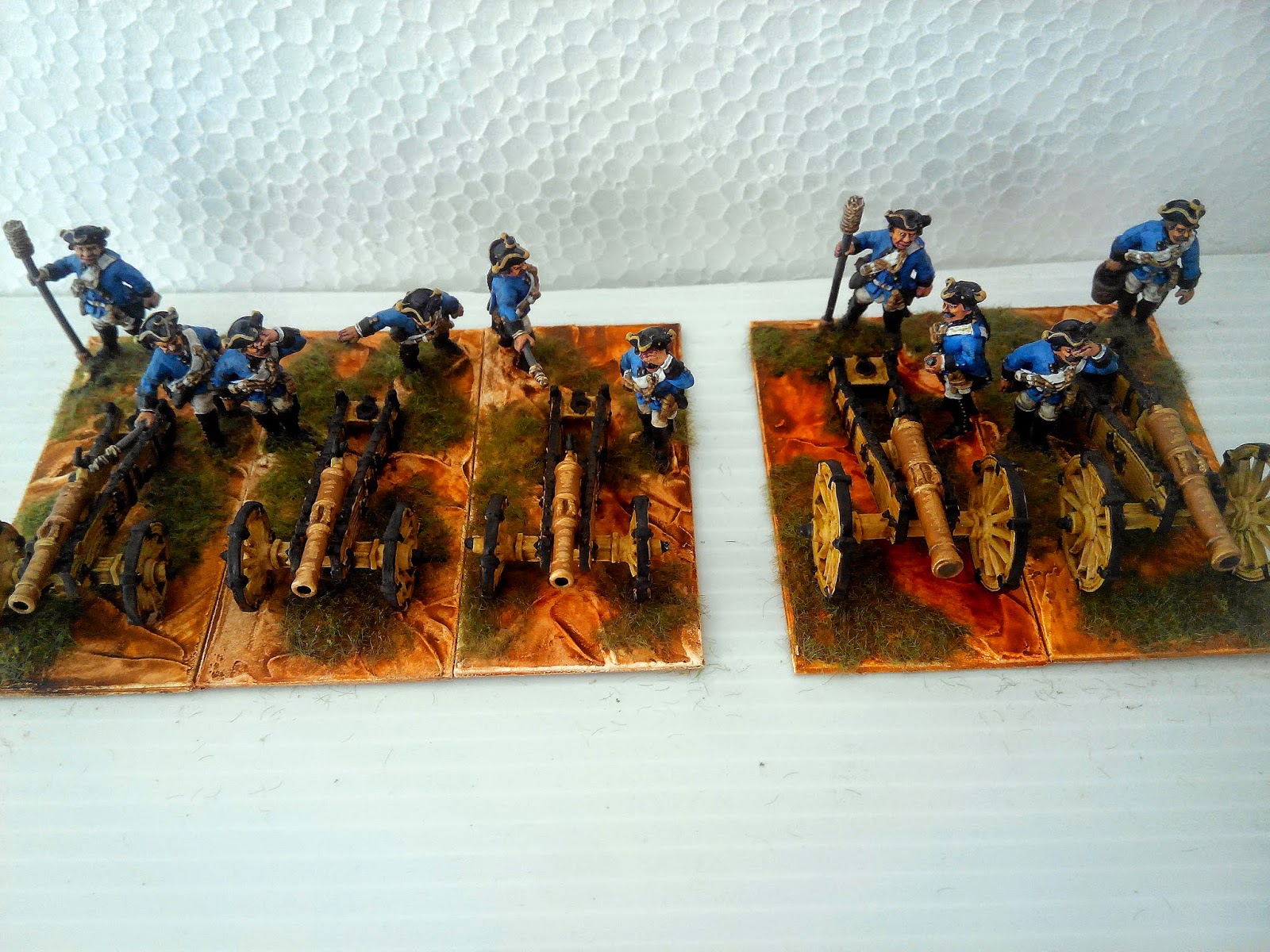 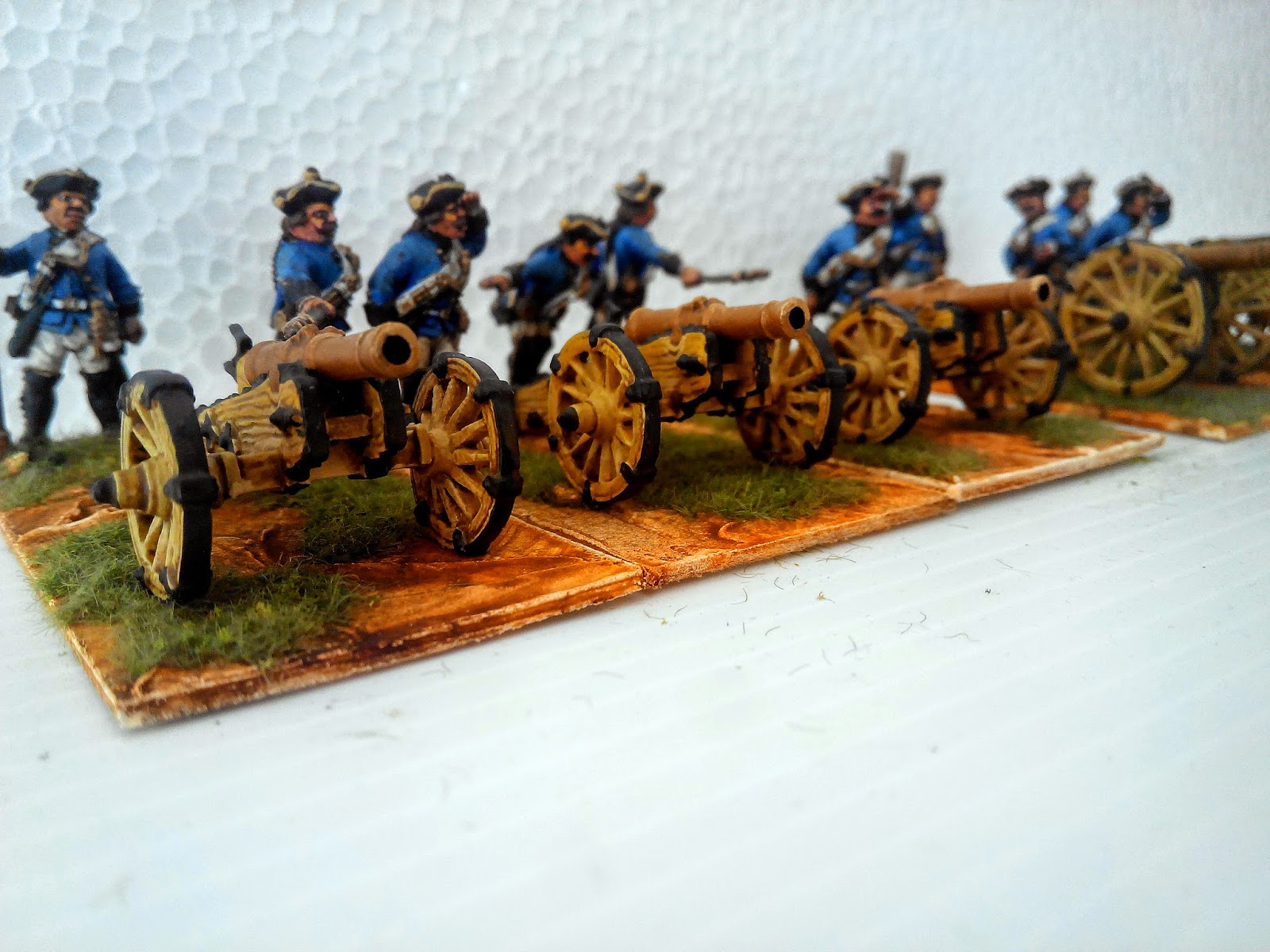 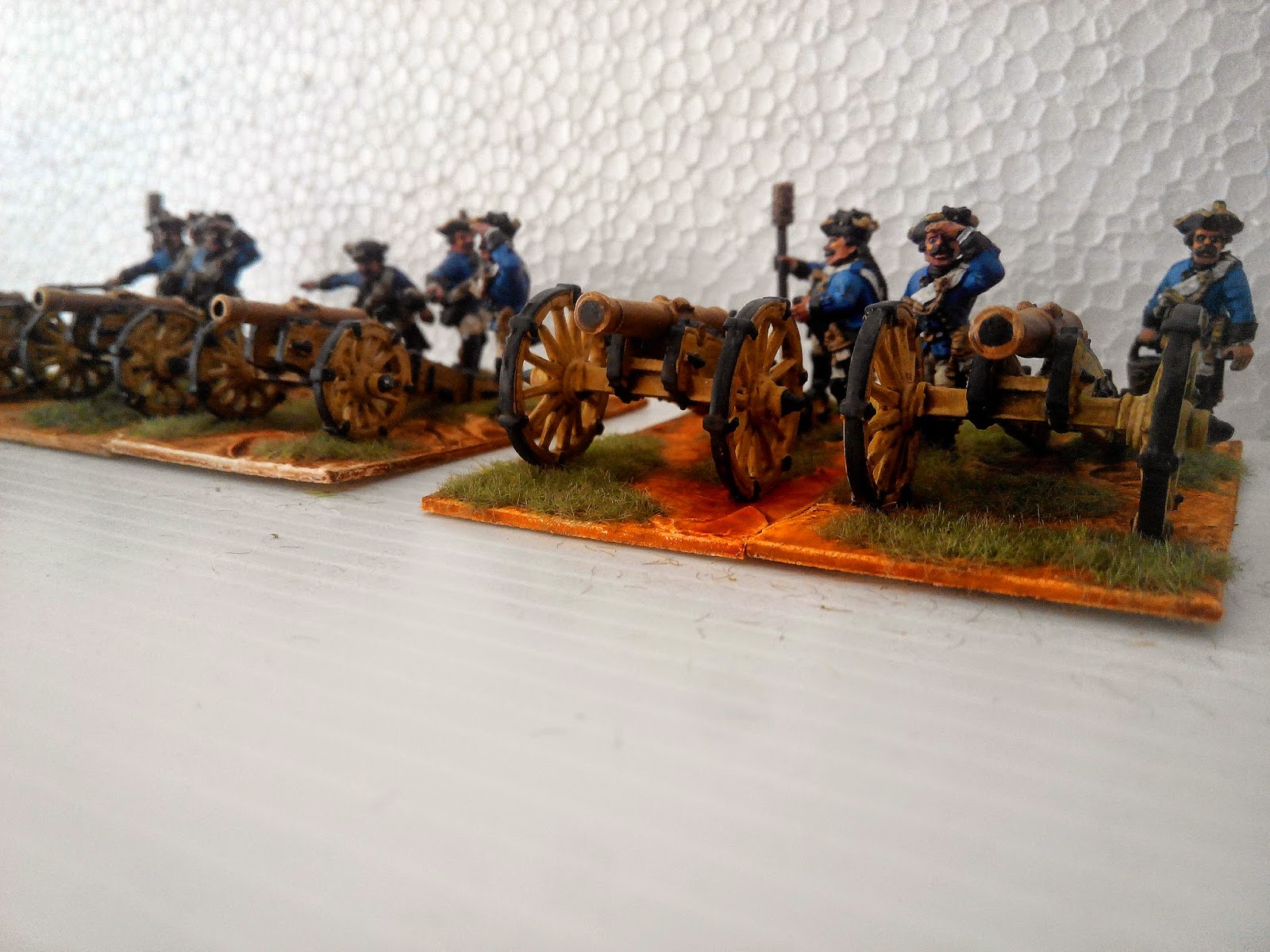 Wurttemberg entered the SYW without an artillery park worth mentioning. She had the usual light battalions guns but nothing heavier outside fortress use. So the guns painted here were assembled from donations from their Austrian allies - some captured Prussian guns (in blue) and some redundant Austrian guns (in ochre). It's possible that there was no time to repaint them so that they were pressed into service in their original colours.

In each colour there are 3 light battalion guns and 2 medium guns, probably 6pdrs. All guns and the crew are by Foundry.

As for the crews themselves, throughout most of the war they wore a very dour colour scheme of dark blue coats with black facings but at the end of the war (date unclear) they switched over to this more interesting light blue.

You have to feel rather sorry for this unfortunate army pressed into service on the wrong side. Most Wurttembergers were Protestants and their coats were clearly modelled on the Prussian army. Yet the state was ajacent to the French border and so it found itself in a sorry alliance with the French. Later on in the war the Wurttembergers served with the Austrians, a more realistic ally and their performance improved markedly.
Posted by Painted Soldier at 09:37 3 comments: 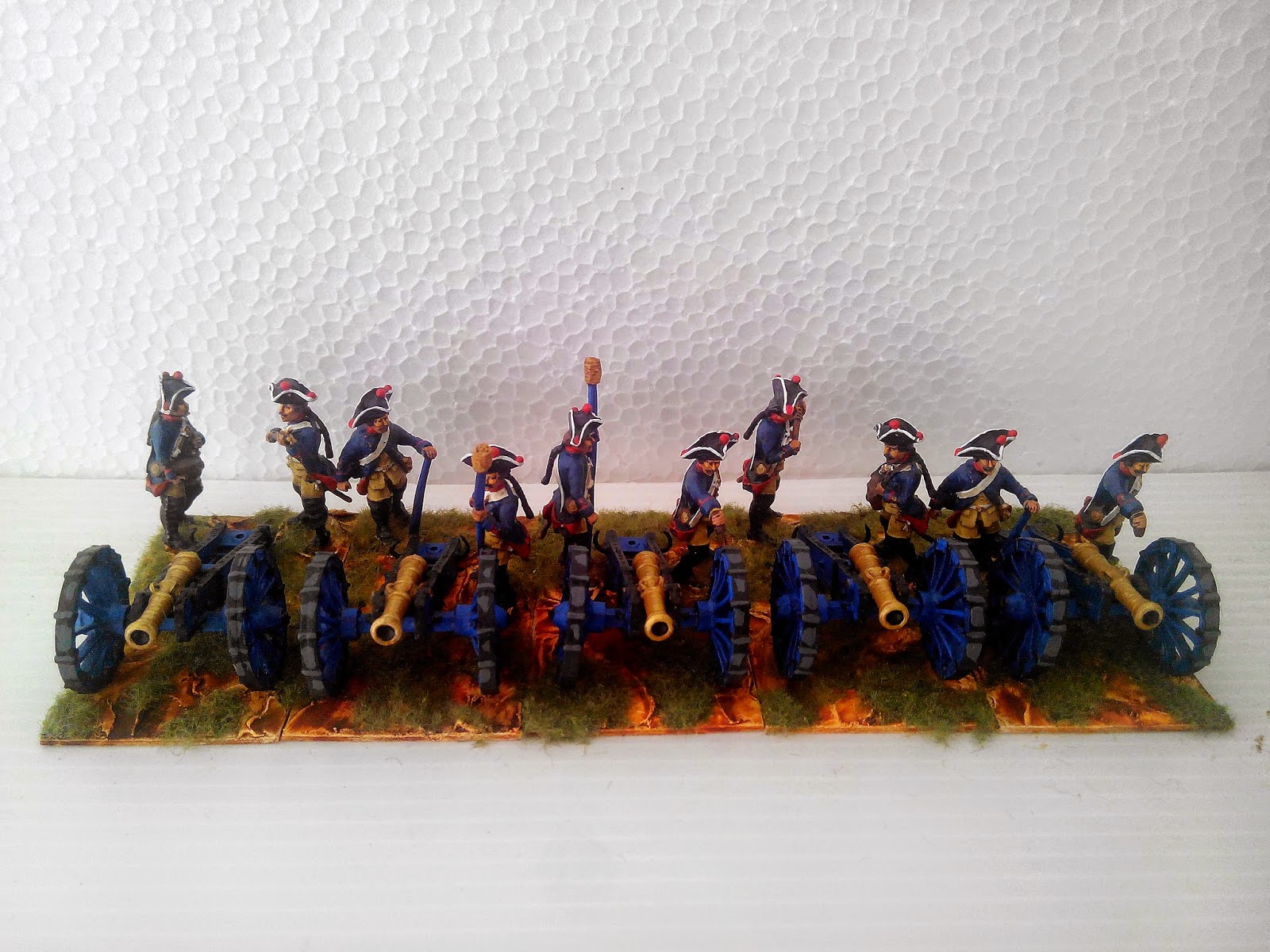 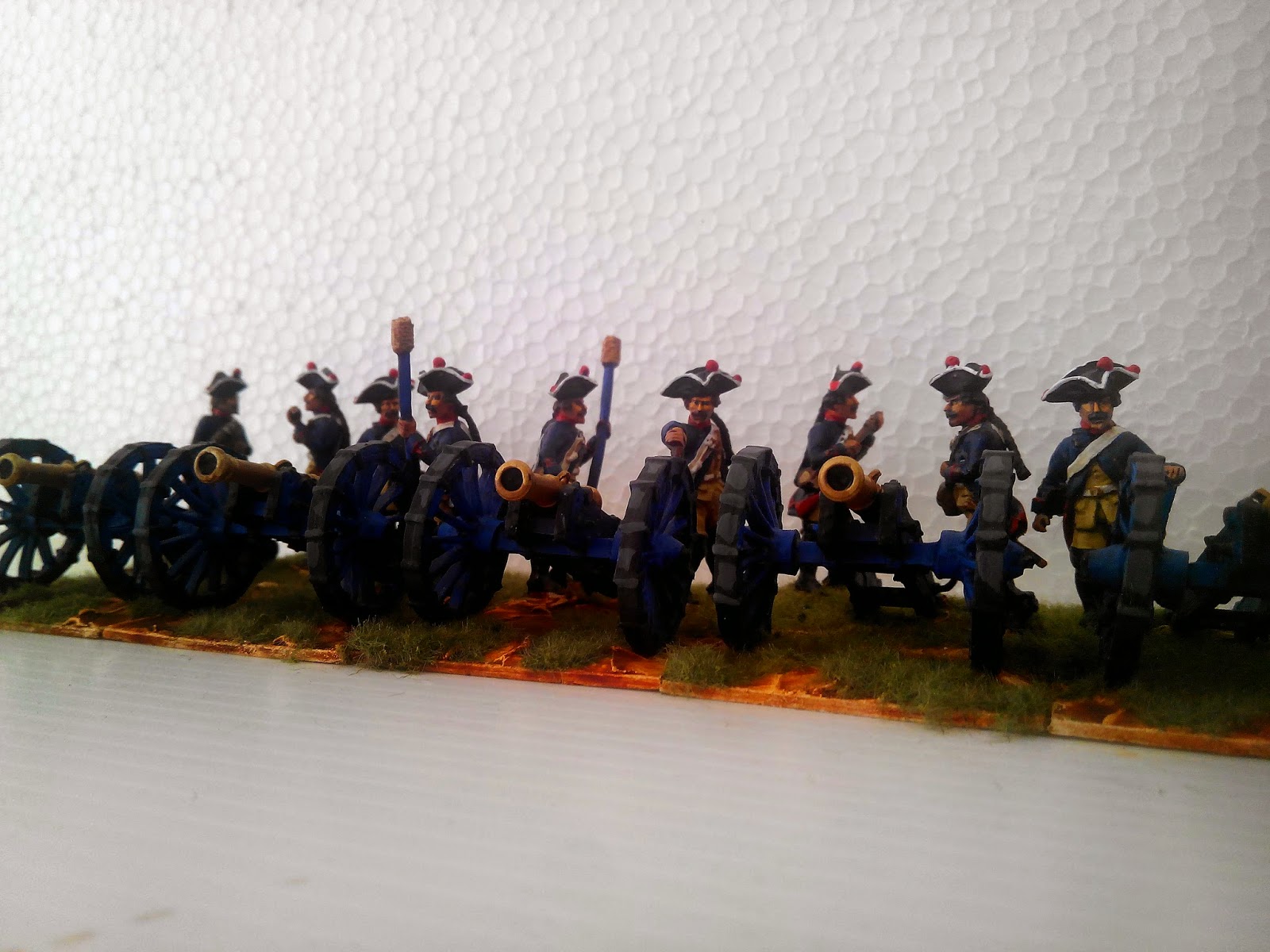 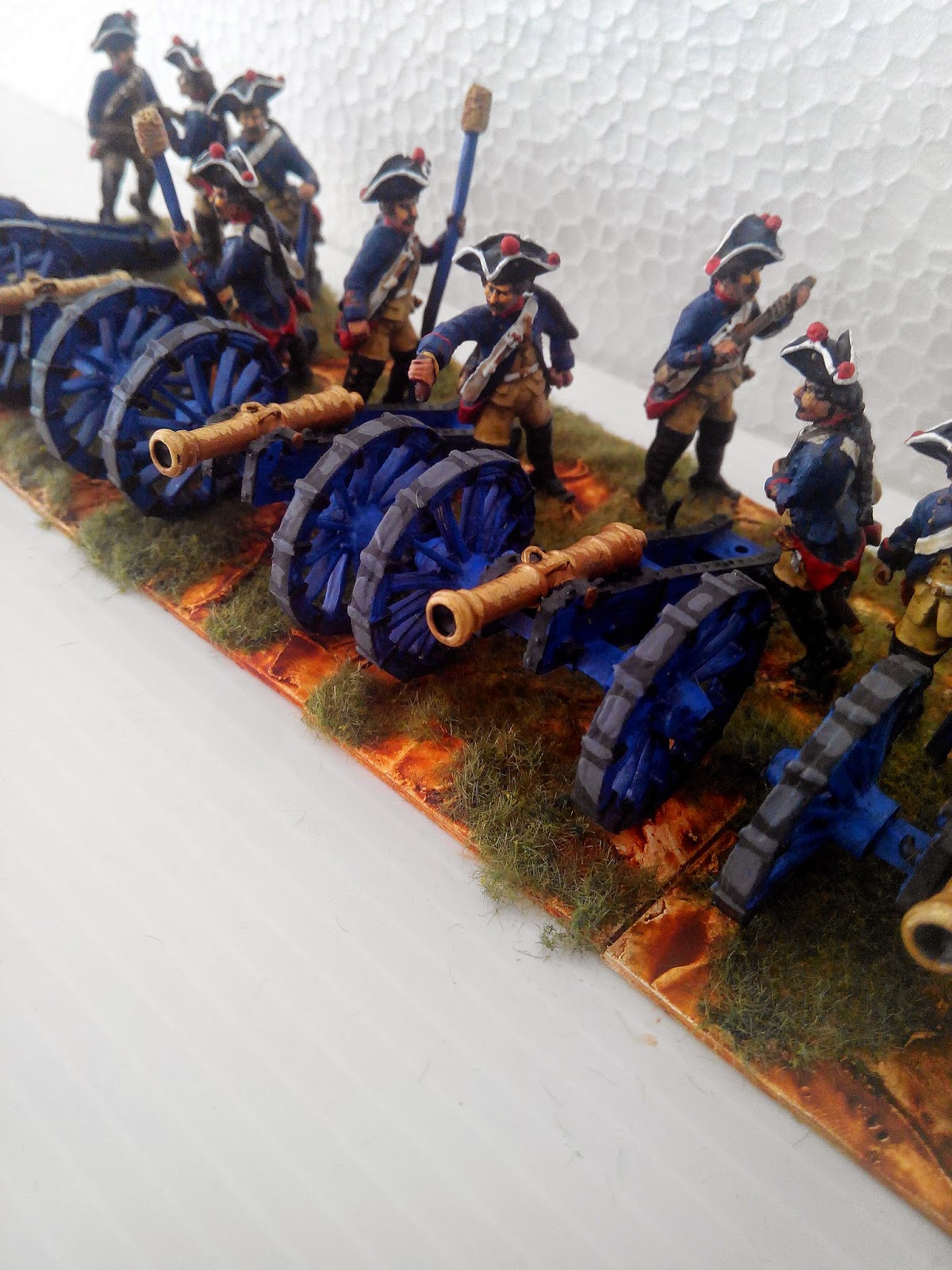 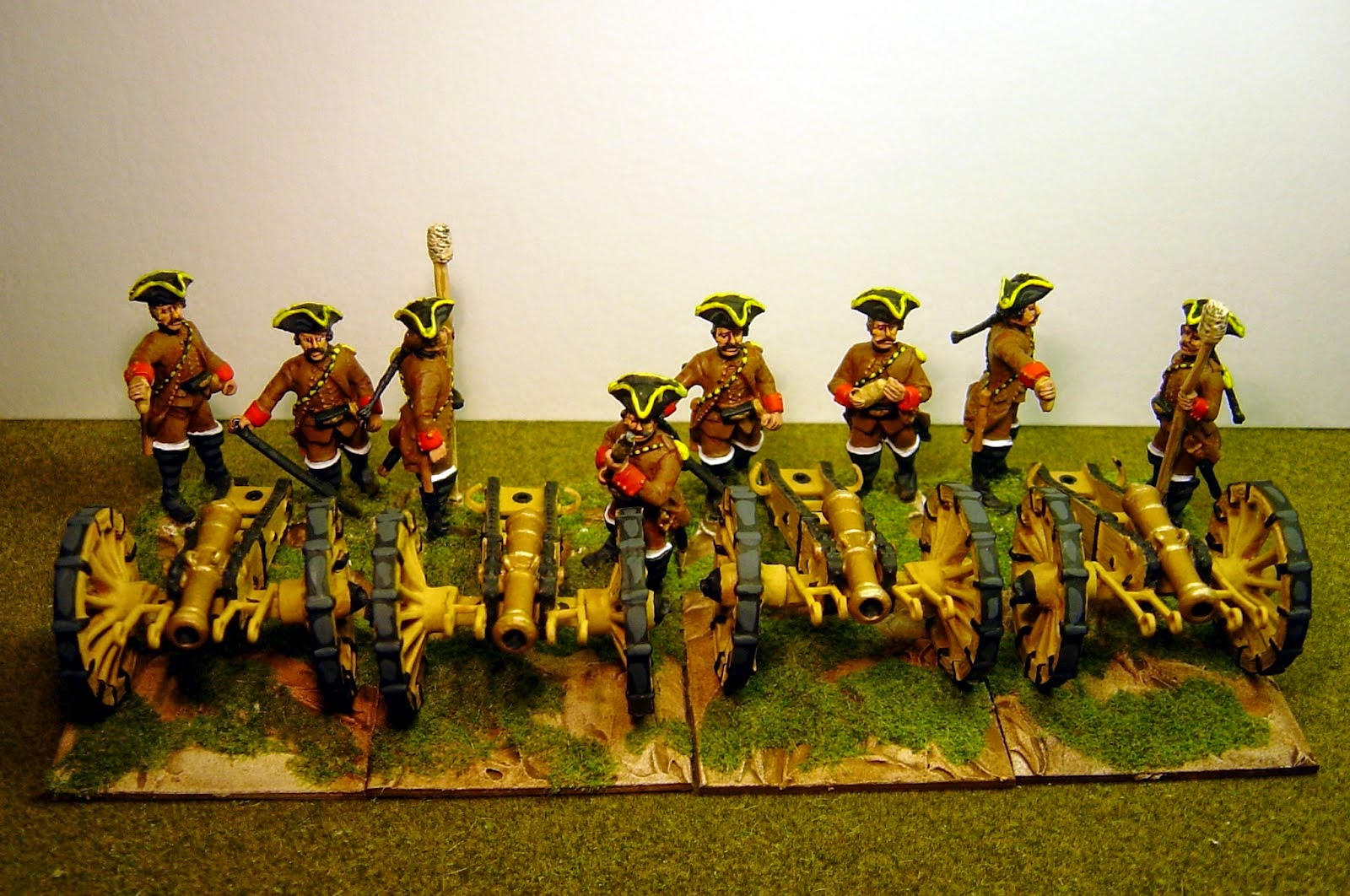 I've just painted these Prussian 3pdr battalion guns from Sash & Saber. I'll put one gun between two battalions although the real deployment was for two per battalion. I've also painted the tricorne pompoms in red despite Kronoskaf showing them as more multi-coloured - I've gone with Greenwood & Ball who show red and red, in my mind, is rather more aesthetically correct for artillery.

I've also shown an old picture of their Austrian counterparts.
Posted by Painted Soldier at 03:31 2 comments: 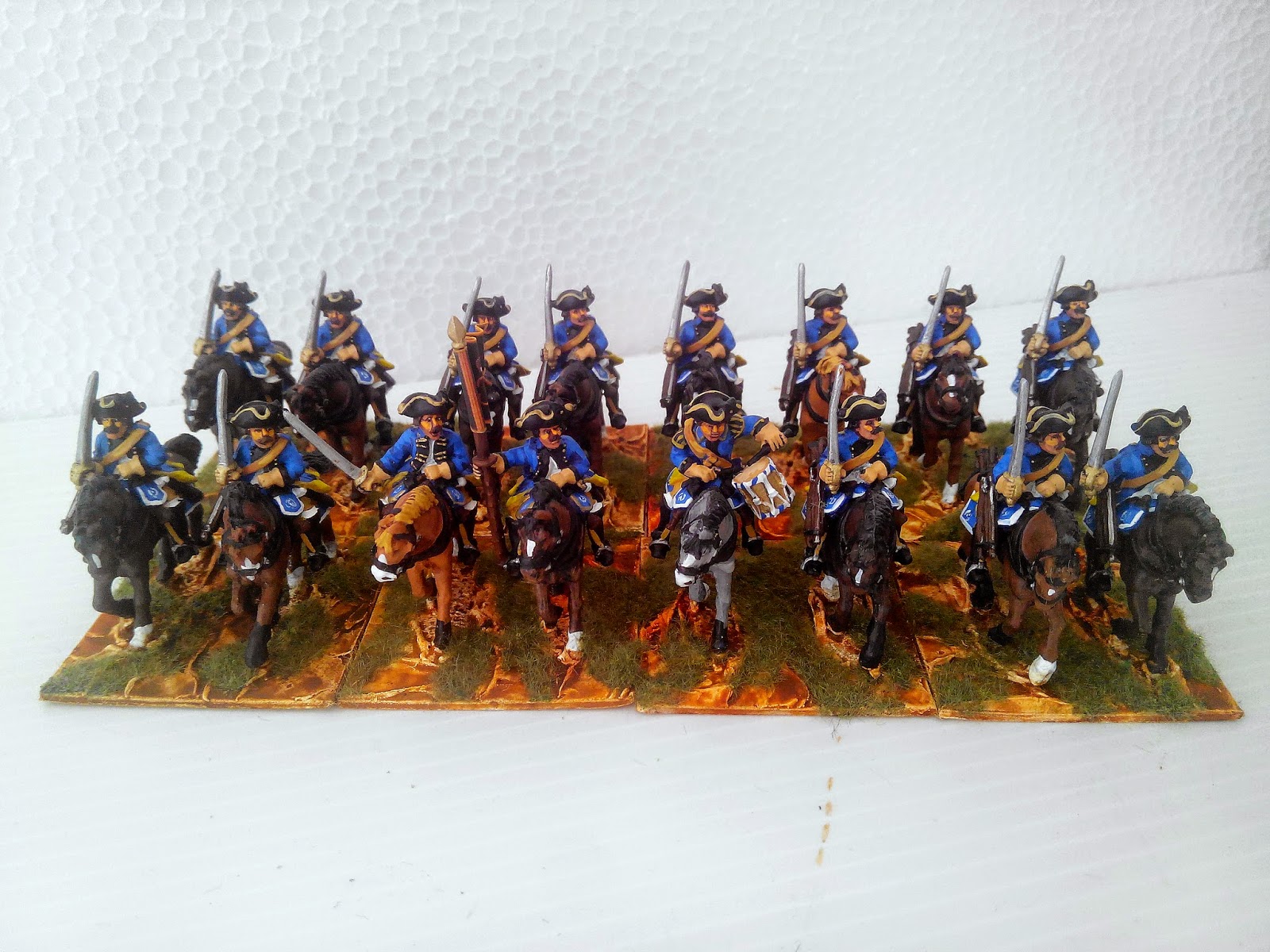 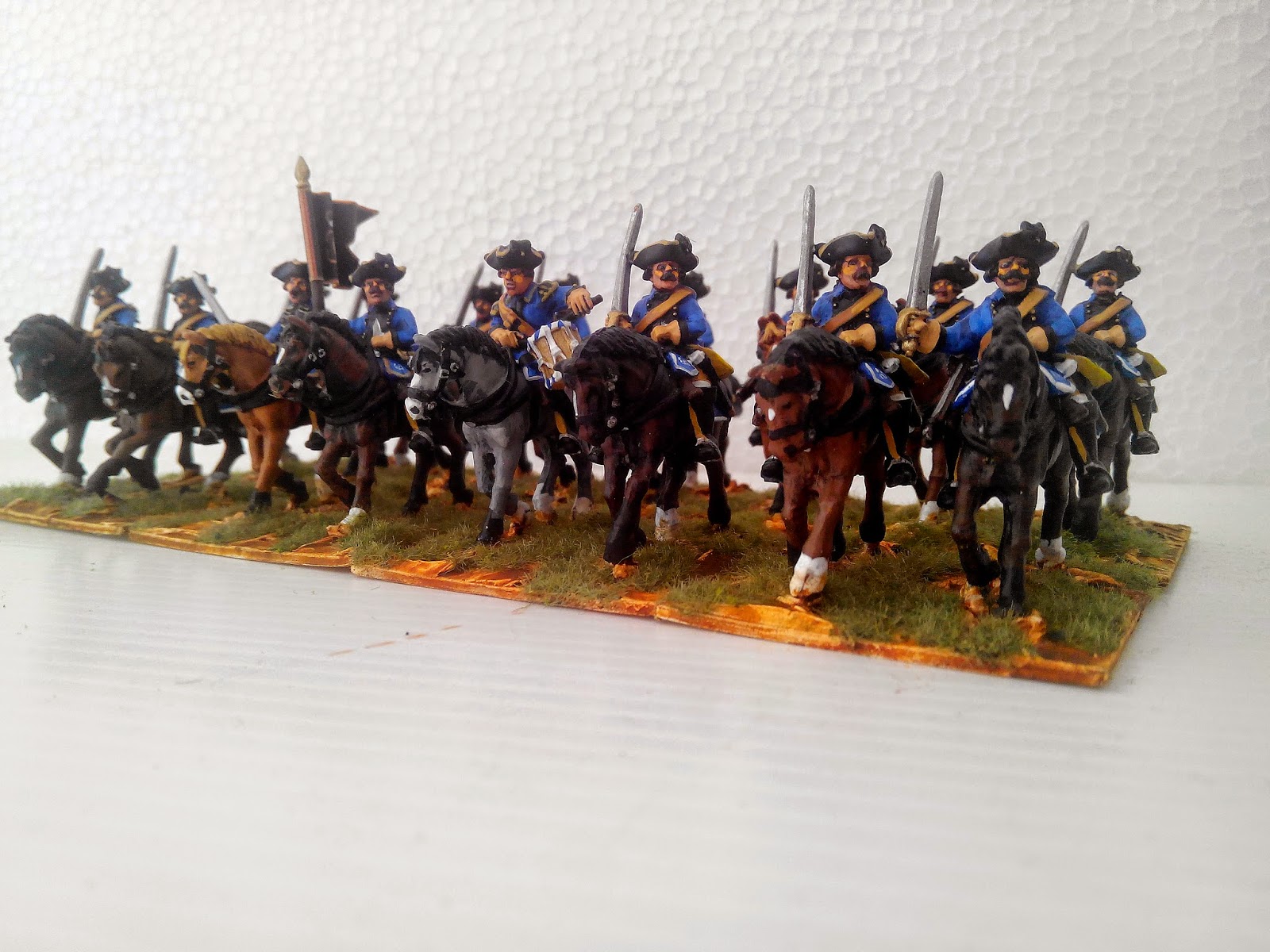 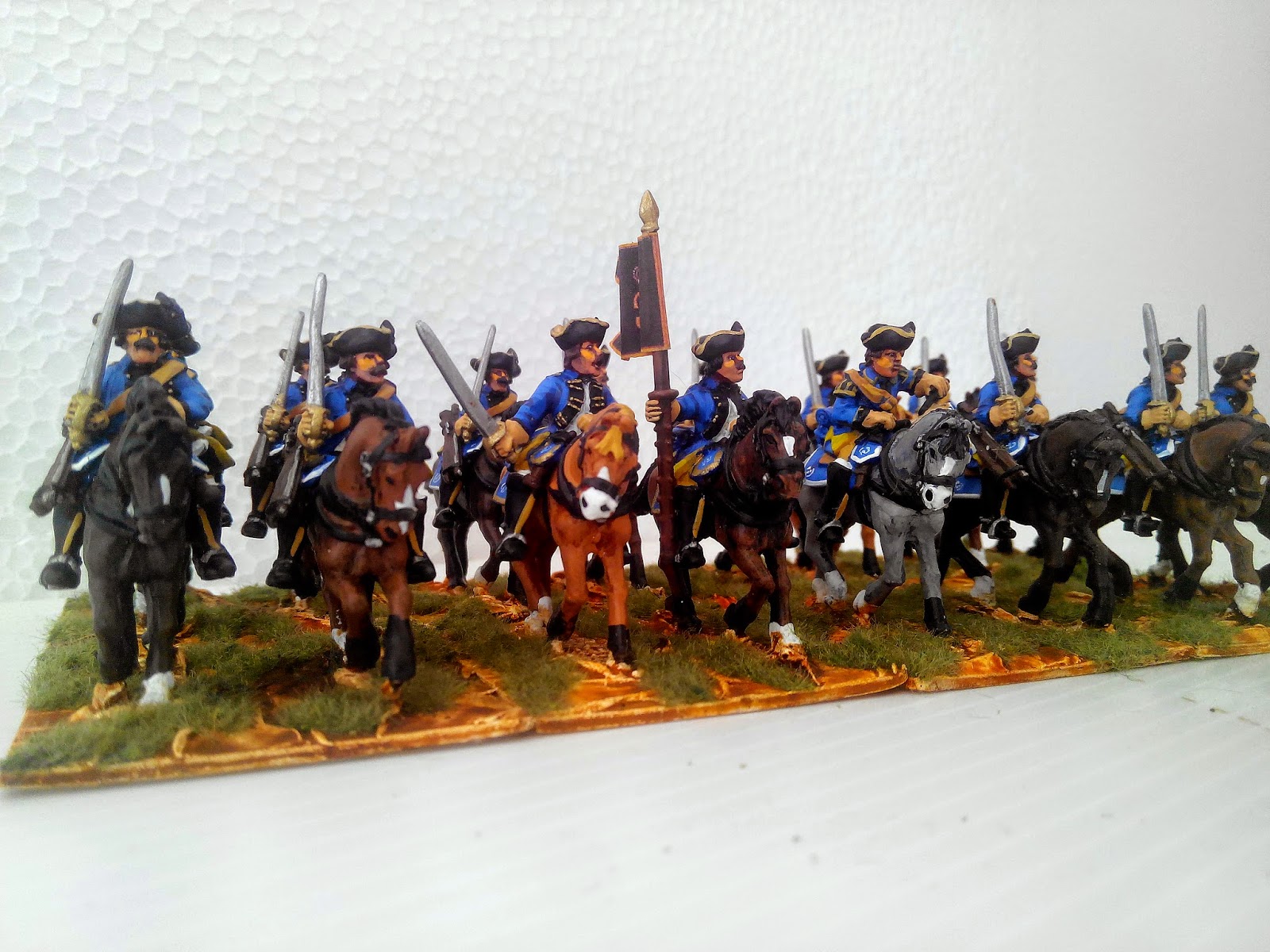 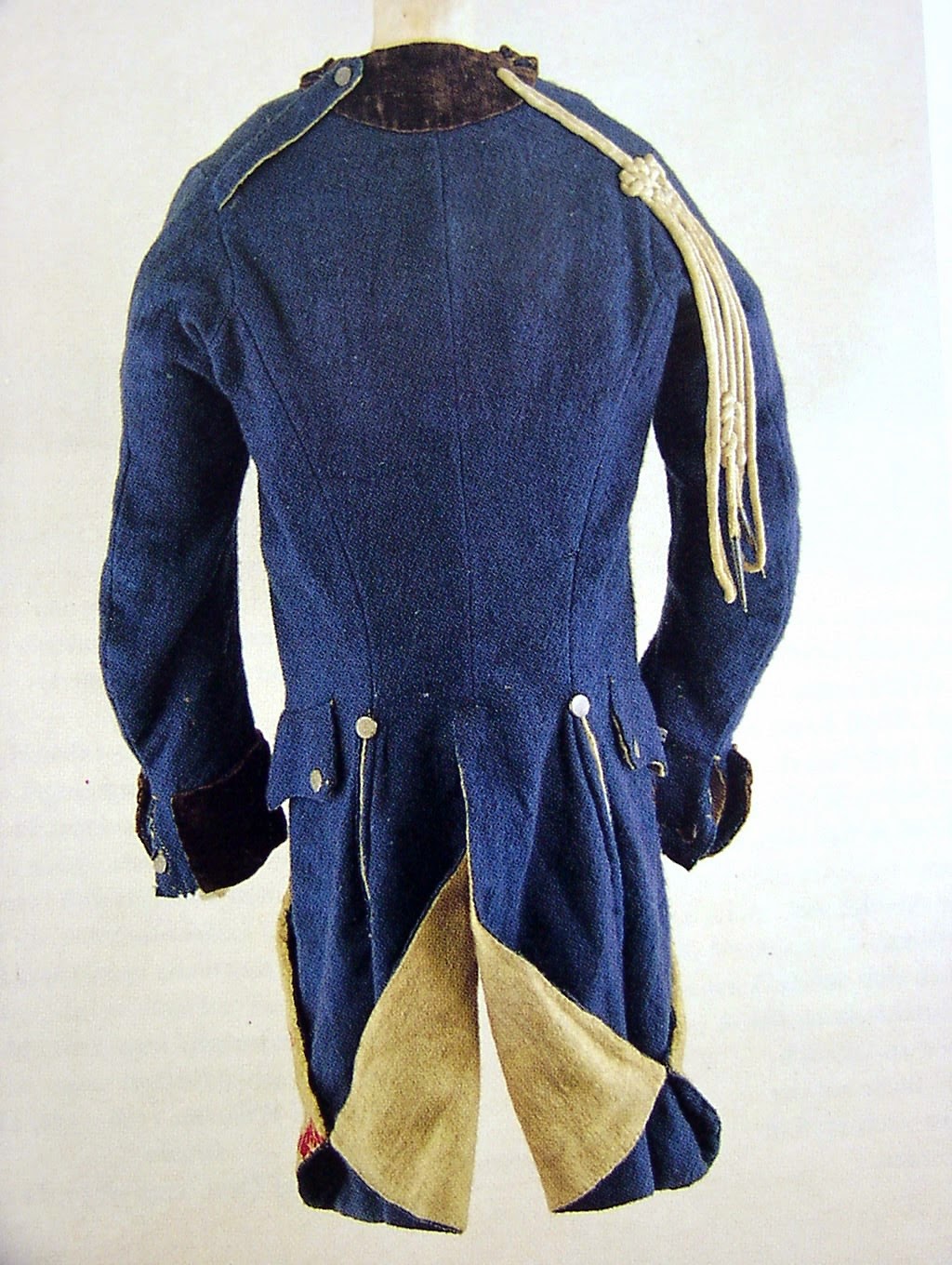 This was Wurttemberg’s cavalry contribution to the Reichsarmee. There is an interesting comment on Kronoskaf concerning the coat colour: at the battle of Rossbach in 1757 this regiment had medium blue coats similar in colour to Prussian Dragoons and the coat colour proved to be it’s downfall as it was attacked by the Austrian Hussar regiment Szecheny and lost its standard. Thereafter the regiment changed it’s coat colour to dark blue.

I have painted it in the Prussian Dragoon blue which is in itself a tricky colour to get right. I’ve seen Cornflower blue used and that is definitively too light. I attach a picture of a genuine dragoon coat held in a museum.

Next week – Wurttemberg artillery.
Posted by Painted Soldier at 03:42 1 comment: