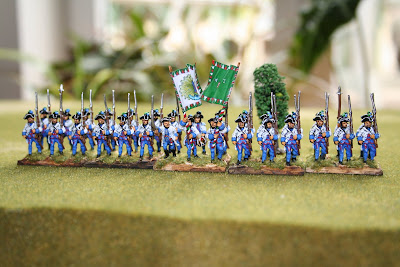 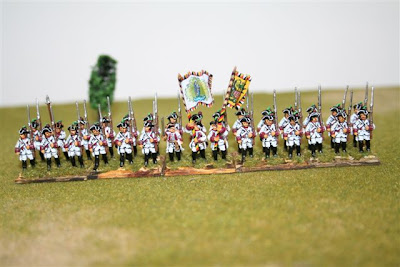 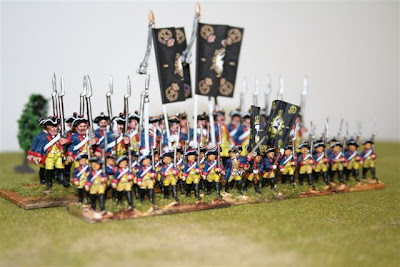 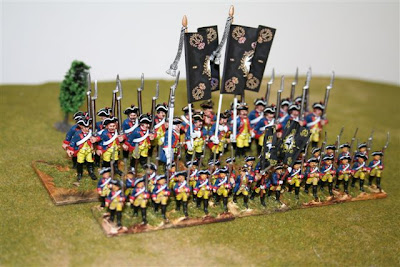 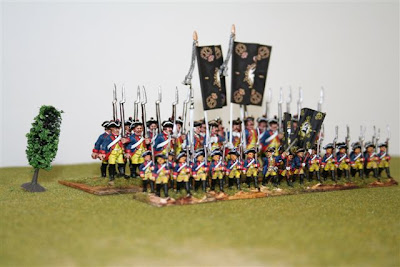 The top picture shows a 30 figure Eureka Hungarian battalion . Under that is a red facings Austrian battalion.
Then three pictures showing a Eureka 30 figure Prussian battalion in front of a Foundry (20 figure) 25/28mm for size comparison.
Posted by Painted Soldier at 19:20 1 comment: 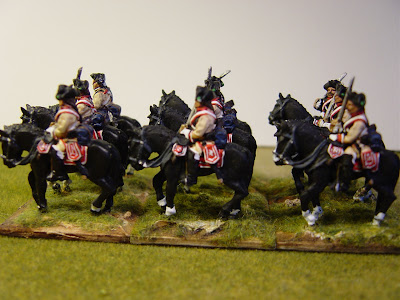 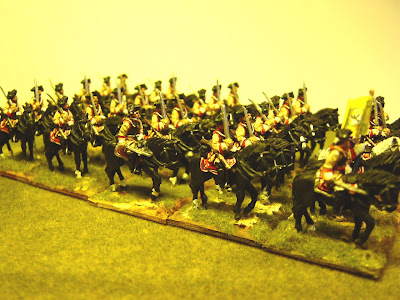 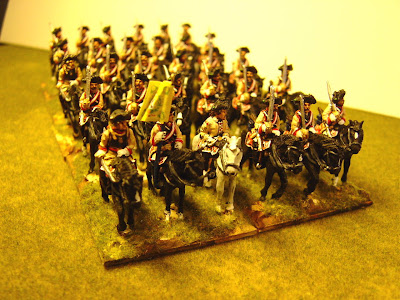 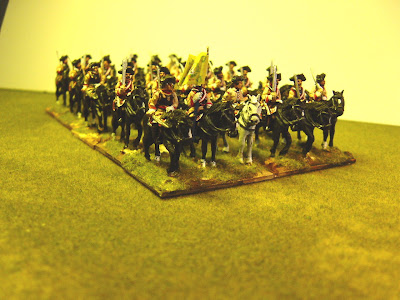 I'm a great fan of Eureka's range of SYW figures. They are sold as 18mm and the cavalry are certainly big. The infantry, which I'm less keen on, are slightly larger than big 15mm ranges, like Old Glory. I keep buying figures, painting them with a mind to keeping them, then a few months down the line I sell them on aBay.
The range from Eureka presently has Prussians and Austrians and those are more or less complete. Russians will be available early in 2008, I'm told and they are researching the French army.
The 30 painted figures (moulded as one-piece) are of Prussian Cuirassier Regiment No.1
There are three variants of both horse and cavalryman for the rank-and-file and a single figure for the officer, standard bearer and trumpeter.
Posted by Painted Soldier at 16:56 No comments: 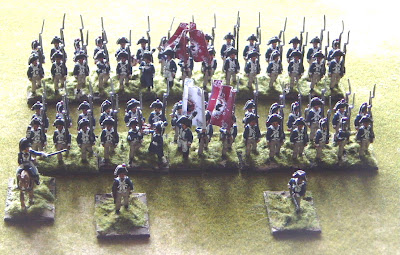 This week I have finished a 15mm Napoleonic unit (above) of Prussians. This consists of 2 battalions of IR49 Muffling, each 30 figures, plus 2 schutzen or skirmishers armed with rifles and a mounted colonel. The figures are by a UK company called AB that no longer sells these ranges, though its still possible to get these figures from Eureka in Australia. They are the most expensive 15mm figures made and also by far the best. Anthony Barton, was the designer and he also had something to do with Battle Honours, which I looked after a few years back in south London.

This unit participated in the first serious encounter in the 1806 war, between France and Prussia, at the battle of Saalfeld on 10th October. The Prussian-Saxon advance guard was destroyed by Marshal Lannes and its commander, Prince Louis-Ferdinand was killed in combat by a Sergeant Guindey of the 10th Hussars.

Painting a regiment with white facings presents special problems because the cross-belts are normally white as well. The white cross-belts lie over the top of the white facings so in this instance you need a very steady hand to allow a thin black line to make one stand out from the other.
Posted by Painted Soldier at 16:25 No comments: