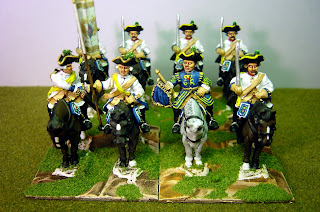 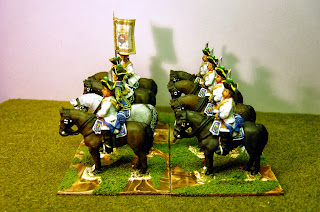 Another Hanoverian Horse regiment, this time, numbered 4-CA by their system (or the 7th of eight)Walthausen.
I'm not sure about the fighting quality of these Hanoverian cavalry units. On the one hand, they were probably the best mounted in all of Europe as the stud-farms for the best 'heavy' horses were around Celle in Hanover. But on the other hand, see the Kronoskaf comment in the last post plus I have seen comments by other people rating the Hanoverian Horse regiments as being less capable than their Hessian allies. This may have been a matter of doctrine rather than courage in the early part of the war but I am not sure and I would appreciate comments from other people on this subject.
Posted by Painted Soldier at 09:29 No comments: 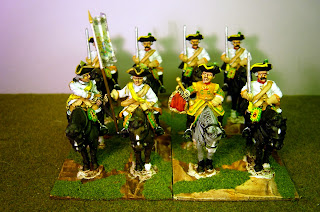 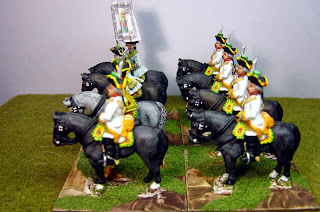 Each Hanoverian Horse regiment consisted of just two squadrons and there were eight in total. All wore white coats without lapels and used a wide variety of facing colours on cuffs and turnbacks - in this case orange. They also had very elaborately decorated horse furniture which is tricky to paint.
Posted by Painted Soldier at 15:03 No comments: 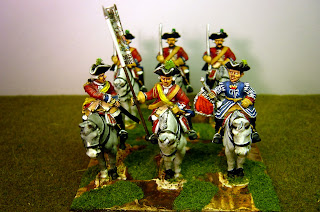 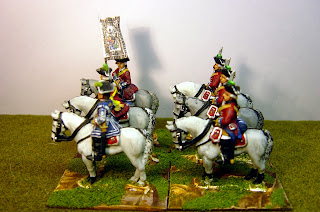 Over the next few weeks I'll be putting up six more cavalry regiments serving with the Allies on the Western theatre of the SYW. Here is the one-squadron Hanoverian Garde du Corps.

There is an interesting comment on Kronoskaf: "On June 26 1757, during the French invasion of Hanover, the regiment took part in the battle of Hastenbeck where it was deployed in the second line of the cavalry right wing. The cavalry was not really tested in the battle. They were superbly mounted, but drilled in the old German style tactics that meant that they were steady, but slow. They would have charged at a trot and quite likely would have received an enemy charge at the halt, trusting their firearms." I can't imagine that Prince Ferdinand would have allowed that to last long.

The regiment was mounted on greys (whites). The figures are Front Rank. 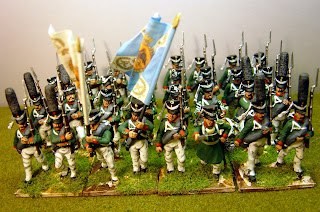 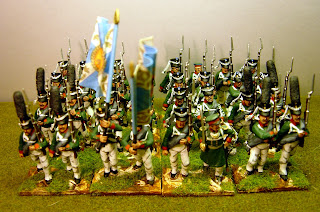 Two battalions of another Russian Napoleonic regiment - Kaporski. These are Perry plastics and I really like the big fat plume and the 1809 shako. That means I have now done 6 battalions, each of 32 figures, and, to finish the division, I have another six to do.
Posted by Painted Soldier at 14:02 3 comments: 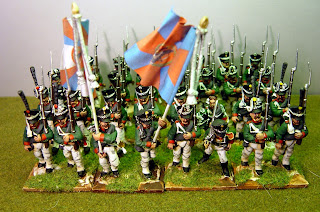 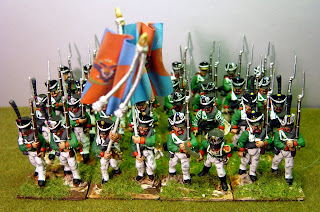 Continuing my Napoleonic Russian division, here are two battalions of the regiment Narva. Figures are by Warlord Games and, without the command metals, they are very nice plastics indeed.
Posted by Painted Soldier at 13:50 1 comment: 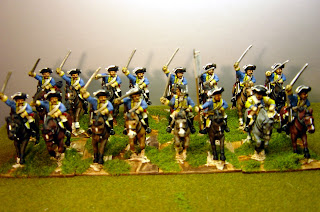 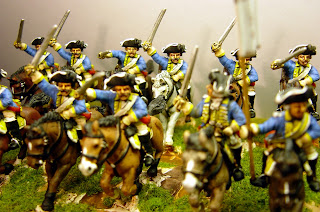 Here is a late Hessian draggon regiment - Prince Friedrich Dragoons, one of just two Hessian Dragoon regiments. The uniform is almost the same through both reigns, the main change being the addition (in 1760) or red turn-backs and slightly different detailing on the shabraque. You may wonder why this is not on my other blog but I'm continuing to post here post 1760 uniforms while on the new blog there will only be the earlier uniforms.

Talking about the new blog, there is a new article there - a biography of Landgrave William VIII.
Posted by Painted Soldier at 13:26 2 comments: 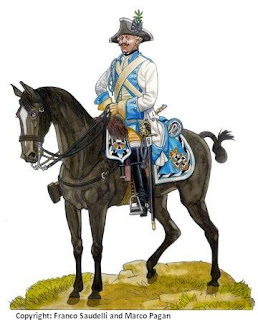 Just to let you know I have started a new Blog specifically on the Hessian army of the SYW prior to the change of ruler in 1760.

Hopefully you will like what you see on this new blog. Some Hessian units will still appear on this blog but they will be post 1760 ones. All those on the new blog will be for the early period and I aim to paint the entire army in due course. 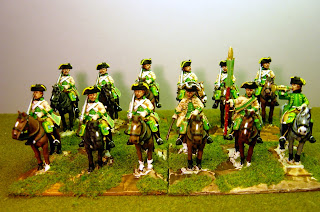 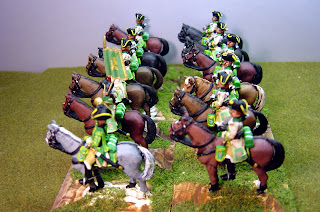 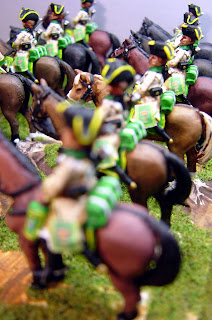 The next regiment I'll be painting will be a dragoon regiment.
Posted by Painted Soldier at 11:11 1 comment: 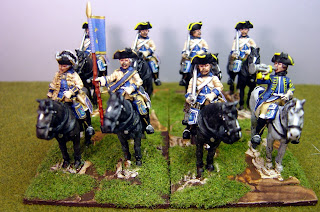 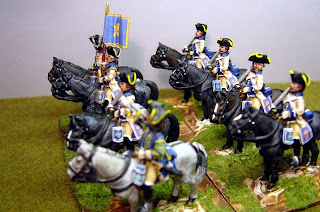 My next three posts will all be on Hessian cavalry of the SYW. These pictures show the 'horse' regiment Prinz Wilhelm/Erbprinz after the uniform changes made in 1761. In previous posts on the Hessian foot, you will, perhaps, recall that big changes were made after January 1760 when the Landgrave Wilhelm VIII died and was succeeded by Friedrich II. The army, which already had a very distinctive Prussian look to it, was now made into a mini-carbon copy. The old-one battalion regiments of foot were made into small two battalion regiments and the horse made into Cuirassiers, but without cuirasses. This then causes some difficulties when wanting to represent them on the wargames table as no manufacturer makes a cuirassier figure without a cuirasse. These figures are from Eureka's lovely Saxon range and they are excellent sculpts with very little cleaning needed. But they are rather on the small size if you compare them with either Foundry or Front Rank cavalry. The other problem is that there is no sabretache shown and I have added paper sabretaches which you can see in the pictures. I'm giving some thought to starting a new blog just on the subject of the Hessian Army of the SYW but please give me your feedback on whether you think that might be a good idea or not.
Posted by Painted Soldier at 09:35 2 comments: