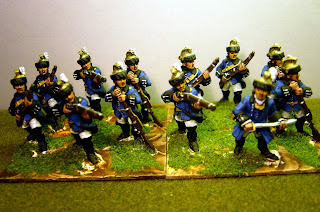 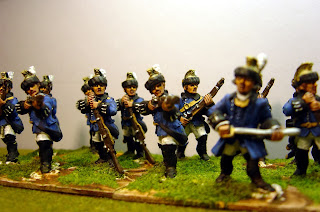 Back in the 1740s this unit was the Arquebesiers du Grassin, made famous by their solid performance at the battle of Fontenoy (see my post in June 2011 when I painted them). Skip forwards a few years and, after the usual amalgamations and disbandings, this was their new uniform. The blue coat and black facings remains but the exotic fur lining and hats have gone to be replaced with this more sober dress topped by a helmet a la Schomberg. These were worn by the dragoon element of the legion whilst the fusiliers wore the tricorne. They even kept the old Arquebesiers flag.

That's the last post of the year. I wish you all a happy New Year and see you on the other side of the festivities.
Posted by Painted Soldier at 16:17 1 comment: 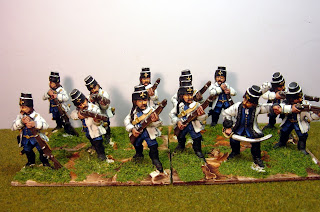 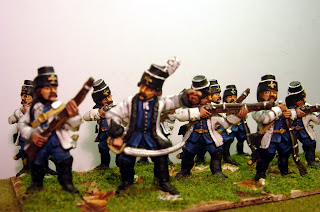 This was another legion of mixed infantry and cavalry raised by the French Marshal and bon-viveur in 1761.
I rather like a mirliton on infantry. Figures are by Front Rank.

This is my last posting before Christmas so I'll take this chance to wish you all a great festive season, a big fat turkey for you and your family and lashings of christmas pud with brandy butter. Go for it and peace to all!
Posted by Painted Soldier at 09:22 2 comments: 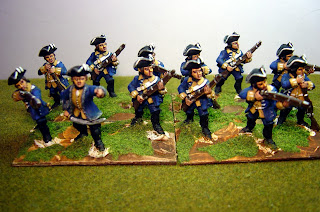 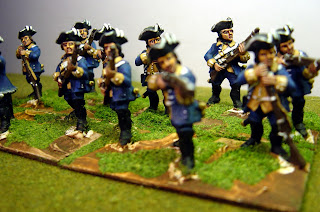 The facing colour is ventre de biche, a pale brown or chamois. Figures are by Front Rank. Over the next few days I'll finish three more similar legions.
Posted by Painted Soldier at 10:28 2 comments: 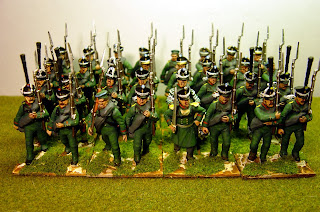 Progress!! Here is another Jaeger battalion, plastics from the Perry brothers. This is the tenth done out of twelve so we are marching on.
Posted by Painted Soldier at 09:33 3 comments: 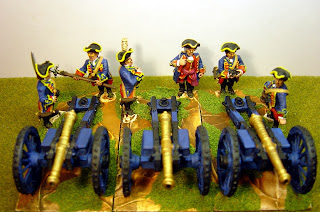 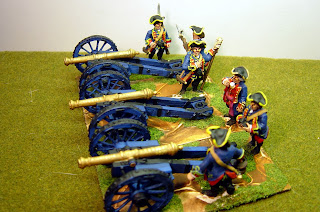 A British 12pdr battery - figures by Foundry, guns by Elite. Elite make some of the best artillery pieces for the SYW and they are a good price too! I'm beginning to wind down for Christmas and getting in the festive mood.
Posted by Painted Soldier at 09:42 2 comments: