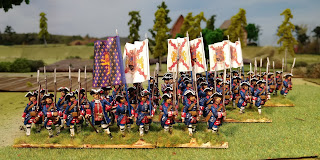 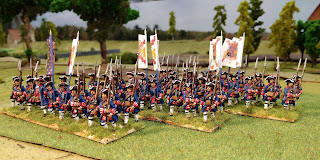 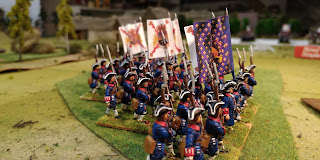 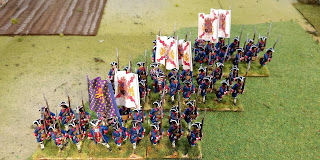 I have painted here three battalions of the Spanish Guards, in their smart blue uniforms copied from the French Guards. A Spanish army will be the opponents of the Piedmontese army (mostly finished) and the key brigade in the Spanish army will be the Guards. I will do a further three battalions of the Walloon Guards in due course. The only difference in their uniforms will be a black cockade instead of the red the Spanish Guards wore.

Here are the first Spanish reinforcements sent to the Kingdom of the Two Sicilies in 1741.

Which averaged out at about 420 men per battalion. It is worth noting also that the cavalry went without their horses and that when they arrived they scrabbled around to find mounts.
The Royal Navy was supposed to be blockading the eastern Spanish coast and the Western Mediterranean in general to prevent this happening at all but this period was one of those rare times when the British admiral in charge (Haddock) was not up to the job.

Finding the correct figures for the Spanish has taken time because they wore their coats buttoned-up at the chest while most Europeans wore their coats open showing the waistcoats underneath. The only other nation suitable for substitution is GNW Swedes. There are a couple of companies who make Spanish WAS troops but either the range is incomplete or I just don't like the figures. So here most of the figures are from Ebor although a couple of old Capitulation figures ( a long defunct French company) have crept in. The Ebor figures come with separate heads so you can get plenty of variety into the battalions. I have added waist pouches easily made from balsa wood.


Posted by Painted Soldier at 16:58 No comments: