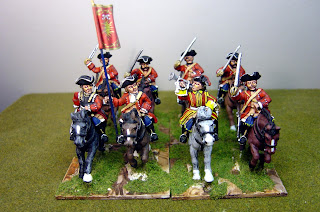 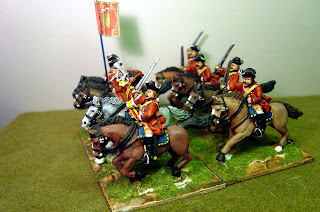 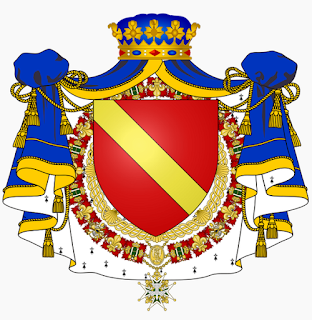 This Regiment has, unusually, an all-red coat, similar in colour, if not style, to the Gendarmerie.  It was raised in 1688 and, in some sources, it is referred to as d'Ayen, another ducal title
used by the Noailles familly. I had no idea about the drummer livery but I have gone with a yellow-red combination which was on the coat of arms.
Posted by Painted Soldier at 13:55 1 comment: 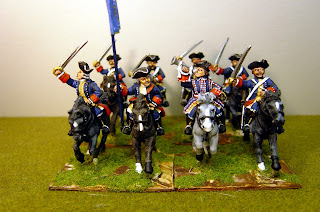 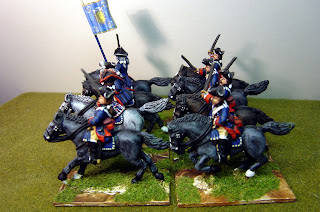 Here is another French Royal Cavalry Regiment - Dauphin, raised in 1661. Figures are Front Rank.
Posted by Painted Soldier at 13:38 No comments: 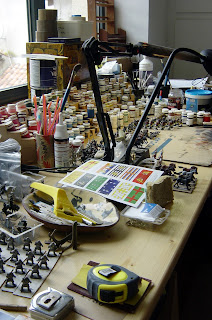 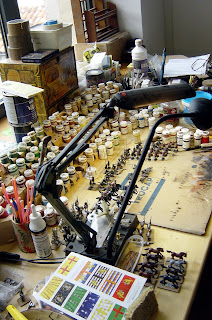 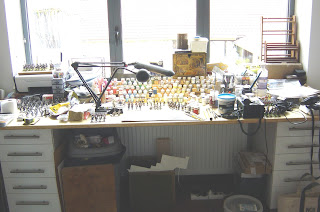 This is the new painting table. The only issue I have is that the large window is south facing and it is nigh on impossible to paint on a sunny day - not that we have had many of those recently. I'm waiting for three Ventian blinds to arrive which should sort out this problem.
Posted by Painted Soldier at 14:21 1 comment: 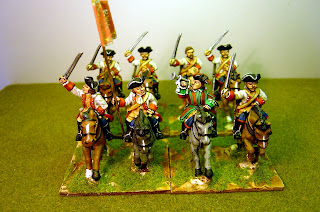 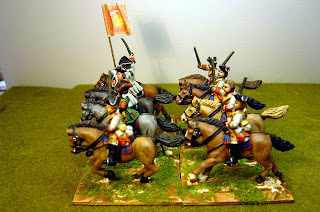 This is a splendid regiment with an interesting history of ownership as per Kronoskaf:

During the War of the Austrian Succession, the regiment served in the successive campaigns in Fanders from 1742 to 1745. In 1744, the comte de Vogüe sold it to the comte de Lastic de Saint Jal. In 1747, it served in Provence.

In 1756, the regiment ranked 40th and counted two squadrons.
In 1759, the ownership of the regiment returned to the House of Vogüe.

What is interesting from the above is the fact that regiments could be bought and sold and, presumably, won or lost on the turn of a card!

This regiment fought hard at the Battle of Minden. "Cerice de Vogüé, its mestre-de-camp, was seriously wounded and captured by the Allies. After the battle, the regiment had only 120 horses remaining compared to 280 horses at the opening of the campaign."

The musician coat colour is my fictional creation as I could find nothing to help.

Posted by Painted Soldier at 13:49 No comments: 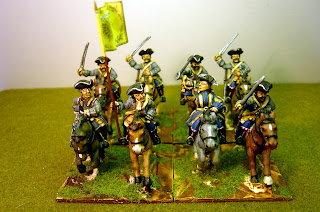 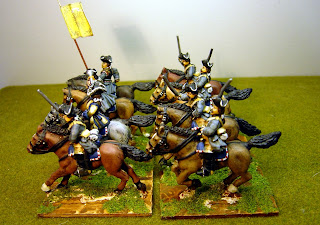 This is a Royal Regiment in French service with a rather unusual and dour look to it with it's steel grey coats.
Kronoskaf has nothing to say about the livery worn by it's musicians but there is a clue in the fact that there is an infantry regiment (called 'Conty') where the livery is described. The infantry regiment was 'owned' by
Louis Armand de Bourbon, prince of Conty or Conti and it's drummers wore buff coats faced in blue so I have given the cavalry trumpeter the same colour scheme. 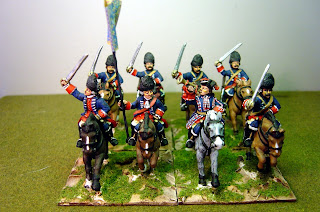 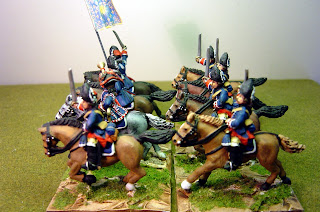 I'm back at last - a little late but better late than never. The new house is almost finished and I have started painting again. My new painting table is up and running and, at 2.40 metres long, I have more space than I am used to. Funny how one still manages to fill up the available space though!

Here is a 25/28mm French SYW cavalry regiment - figures by Front Rank.﻿ This regiment was raised in 1639 by the duke of Saxe-Weimar so it's original recruits were Germans although by the SYW this may well have not been the case.

Over the next few days I will post five new French cavalry regiments.