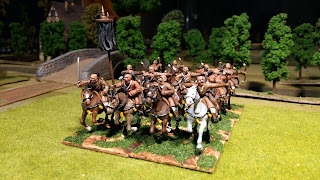 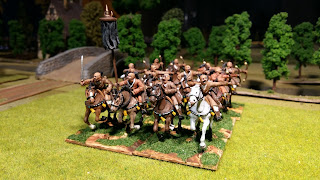 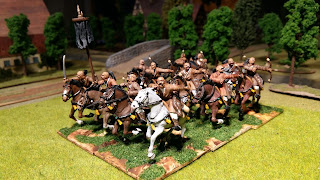 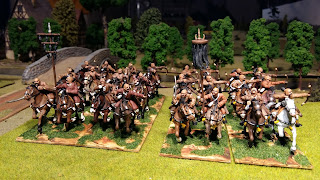 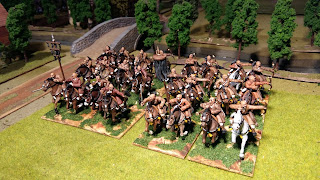 The second of the Tatars units is finished. The bottom two pictures show them together ready, perhaps, to raid Berlin while Frederick II is elsewhere. 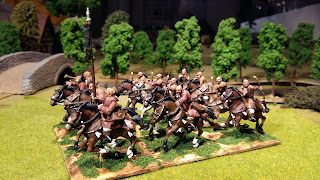 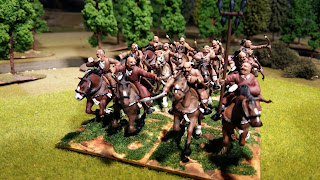 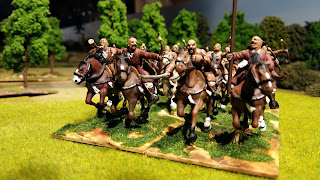 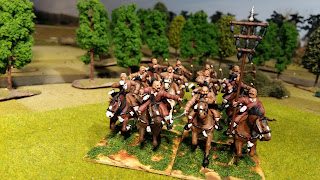 These plastics are from Fireforge's ‘Deus Vult ‘ range and are Mongol cavalry. I removed the Mongol –looking hat and made them bare-headed with just the head-knot that some of them wore. Fine horsemen though they were, they would be unlikely to stand up to regular Prussian cavalry. But as skirmishers tinkering around the periphery showering arrows they might excel.

Lovely figures. Some of the horses have a really aggressive attitude!
Posted by Painted Soldier at 13:10 No comments: 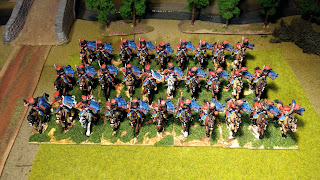 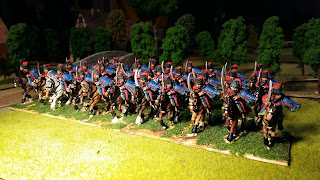 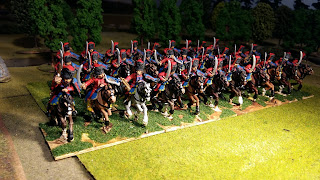 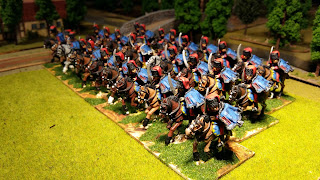 This regiment of hussars (and the 2nd Novoserbskiy Regiment which wore the same uniform) was recruited from Serbians who had fled the Ottoman occupation in 1739. They had been offered land to settle on by the Russian authorities in what was then borderlands of what is today, Ukraine. In Serbian history there were two great migrations – the first between 1689 and 1692 and the second in 1739. Decendants of these people still live there and the administrative centre of New Serbia was Novomirgorod (literally New Peace City), which is now Novomyrhorod, Ukraine.

Kronostaf says: “On December 24 1751, Horvat, a former lieutenant-colonel in Austrian service, was allowed to establish a separate Serbian settlement, called New Serbia, in Southern Ukraine. In exchange for land along the border with the Crimean Tartars (on the right bank of the Dniepr, between the rivers Kavarlyk and Amelnik, around Novomirgorod), these newcomers had to serve during wartime. As the Cossacks, New Serbia had its own administrative and military organisations and kept its customs and traditions. It counted 20 districts.

Military service was extended to all adult male population: half always being on active service, patrolling the borders. Each district had to supply one company of hussars and one company of light infantry. The 20 companies of hussars formed the 1st Novoserbskiy Regiment: 10 active and 10 in reserve.”

This regiment was present at both battles of Zorndorf and Kunersdorf.

This concludes the Hussar phase and next will be Tatars and Cossacks.
Posted by Painted Soldier at 12:58 3 comments: 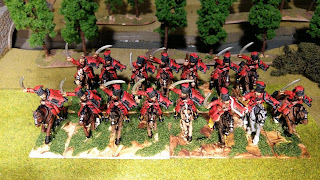 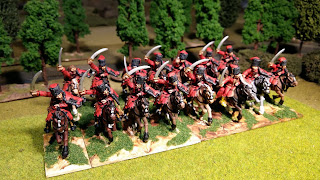 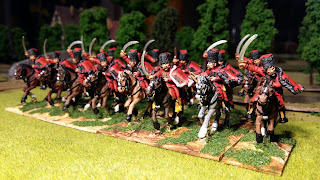 Are these extraordinary or what? Red from top to toe with black lace and leatherwork!
Vengerskiy translates as Hungarian.
Posted by Painted Soldier at 14:26 No comments:

I have four eBay sales going on at the moment but ending soon. They are for 28mm (Perry) ACW Zouaves, painted of course. I need the space here so I am selling them off very cheaply. Postage can also be combined with 2nd, 3rd and 4th being at half postage price.

These are a bargain! 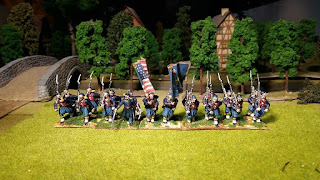 Posted by Painted Soldier at 09:12 No comments: 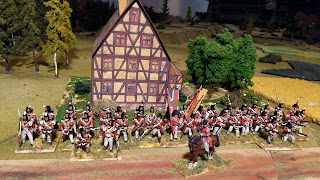 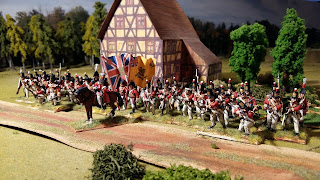 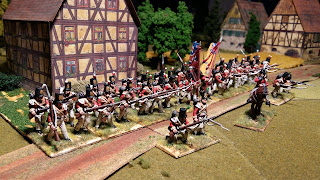 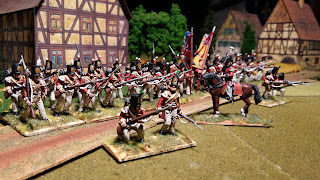 Victrix plastics make up this crack British battalion of the Peninsular. But the flag, which obviously should be buff coloured, is yellow so I will have to replace it.  Strange as it was a scan from the Victrix information sheet.

The mounted officer is a conversion of a Warlord Games Waterloo officer.

This battalion was one of those almost wiped out at Albuera by attacking Polish lancers.
Posted by Painted Soldier at 15:38 No comments: 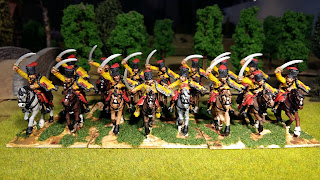 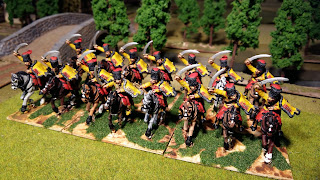 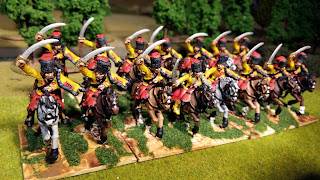 This is an incredible colour combination - yellow and red - and may not be the last strange mix. I am currently painting an all-red regiment and have another after that to do. Then nine weeks of Cossacks, Bashkirs and Kalmuks.
Posted by Painted Soldier at 15:32 No comments: