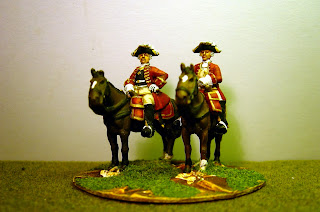 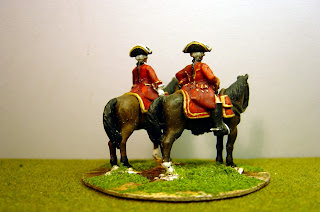 These are lovely command figures from Eureka's Saxon range. The Saxons had established a uniform for officers of general rank in 1735, which was much earlier than most other European states, and which was based on the red coat which had been used from the 17th century.


The problem, from a painter's point of view, is the shade of red was called Ponceau Rot, a very dark shade of red. To do this justice I've had to use three reds outside my normal palette range and I'm not absolutely sure of the shade. The excellent article on Kronoskaf http://www.kronoskaf.com/syw/index.php?title=Saxon_General_Staff_and_Adjutants
does not help as the illustrations show a normal scarlet not a Ponceau Red. Still the figures are very pretty!
Posted by Painted Soldier at 09:55 3 comments: 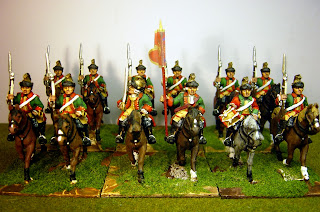 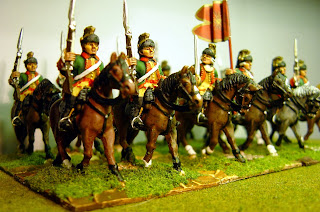 This is the French Schomberg Dragoons in a uniform that became the model dragoon uniform that would, with minor changes, last France for over 100 years.

This regiment in fact was raised by Marechal Saxe in 1743 and, besides having both dragoons and uhlans within the regiment, looked nothing like this. This uniform dates from 1762 when it formally entered the dragoon establishment as number 17.


Figures are by Front Rank.
Posted by Painted Soldier at 09:35 2 comments: 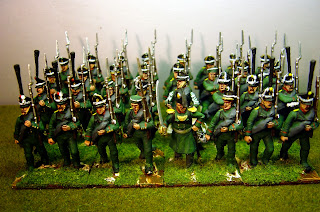 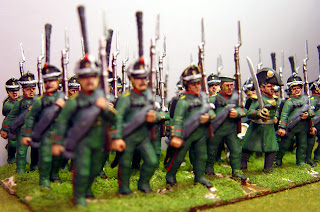 Here is the first of four battalions of Jaegers for my Russian Napoleonic army. I have given them winter-wear green trousers because I want them to be visibly different from a distance. I've also read that grenadiers in these regiments (carabiniers) did not use their tall plumes but I may be converging all these elite companies so they need to look the part. 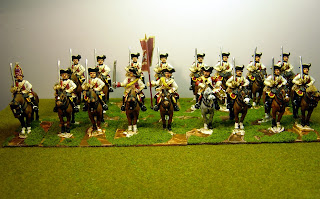 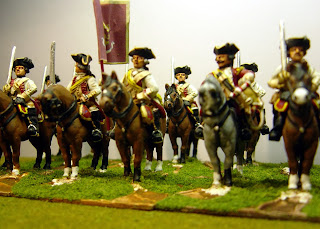 During the SYW there were four Hanoverian Dragoon regiments, each of 4 squadrons, and numbered five to eight. Each squadron consisted of two companies and there was an additional company of Horse Grenadiers that normally formed up on the right of the regiment.

From Kronoskaf:" At the beginning of the Seven Years' War, dragoon regiments usually formed in 3 ranks with their largest and darkest horses in the front rank. On parade each rank was 8 paces distant from the other; and each file 4 paces. A space of 25 paces was also maintained between squadrons. The grenadier company deployed on the right flank at 16 paces from the closest squadron. Column of march was 4 horses wide.
In 1758, Ferdinand of Brunswick ordered the Hanoverian dragoons to form up in 2 ranks."
Posted by Painted Soldier at 09:42 No comments: 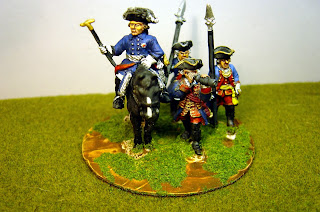 Graf Wilhelm zu Schaumburg-Lippe is shown here with three allied artillery officers. The Graf was the ruler of a tiny state allied to Britain and he supplied the alliance a single battalion of infantry, a handful of cavalry and jaegers and, most importantly, a major artillery park as well as his personal expertise in this field. Artillery was his personal hobby and he established a specialist training school within his territory. Eventual his artillery train grew to 29 x 3-pdr, four x 8-pdr, two x 12-pdr, three x 18-pdr cannon, three howitzers and four heavy mortars. Given his rank and the fact that he was the son of an illegitimate daughter of King George I, he often commanded allied artillery on the battlefield.
I've used a Fredrick II figure from Front Rank as I've seen the Graf portrayed in a very plain blue coat and there are physical similarities in their faces. Figures are a mix of Front Rank, Foundry and Crusader. 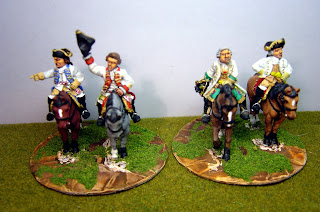 Here are two bases of cavalry lieutenant-Generals. On the left, a Hessian set, and on the right a Hanoverian group. Neither state had a regulated uniform for generals in this period so they all wear cavalry regimental uniforms (of Horse) – white coat with assorted coloured facings, Hessians with lapels, Hanoverians without. Figures are a mix of Front Rank and Foundry. 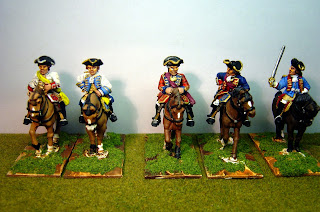 The confusing story of Saxon Grenadiers in 1758 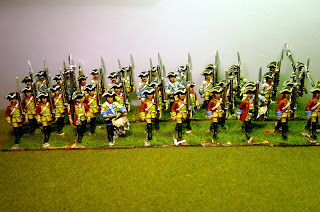 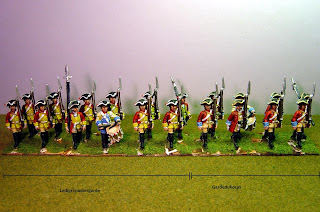 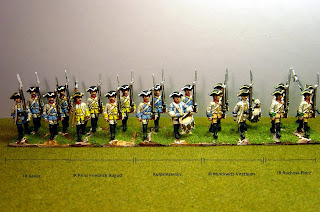 Before I discuss the pictures above I need to recap the situation of the Saxon Army in the early part of the SYW. This war had started with Prussia's invasion of Saxony and the capitualtion of most of the army at Pirna (most but not all – some elements of the army were serving in the Kingdom of Poland and so were not party to the sorry event). On Saturday October 16 1756 the capitualtion was signed and it's terms were as follows:
Most of the infantry were simply formed into new Prussian regiments, against the advice of Frederick's generals, who suggested, rightly as it transpired, that they would just desert en-masse.
The cavalry, on the other hand, were distributed amongst the Prussian cavalry regiments. An interesting side-question is what happened to their original uniforms? Were they allowed to retain them or were they all confiscated?

During 1756-57, the Saxons started to desert, some in entire regiments or battalions, some in bits and pieces, and they started to rally in Austria and later Hungary. The so called REVERTENTEN
(mentioned in my previous post) mustered about 7,300 men by October 1757. With a subsidies contract dated March 11 1758, the Saxon army was taken into French service. To avoid further contact with the Prussians, it marched through southern Germany and had assembled in Strasbourg by July 1758. It had then joined Contades army in Westphalia by September 1758. As part of Chevert's and Fitzjames' divisions reinforcing Soubise's army in Hesse, the Saxon contingent first saw action at the battle of Lutterberg (October 10 1758) where it's determined attacks decided the day for the French army. The Saxon contingent had a total book strength of 10,000 men. Organisation slightly changed during the course of war, but its book strength remained at 10,000 men. Effective strength was often far below as a result of continued desertion and recruitment difficulties, especially during the latter campaigns of the war.

Now to the question of converged grenadiers. Firstly, I assume that they had lost their exotic headwear which was, presumably sitting in the fortress of Königstein, and so they were all issued with tricornes. Then some of the 'new' regiments had grenadiers that were formerly infantry while some had grenadiers that were formerly cavalry and wore a semi-cavalry uniform. I say semi-cavalry because the coat and small clothes would have been 'cuirassier' whilst the straps and other leather equipment would probably have been fresh issue suitable for infantry use. Another assumption is that the ex-cavalry were not formed into cavalry units because of a shortage of mounts.

I've had to make quite a few assumptions here so I hope you will bear with me. Maybe if I can get my hands on the German book I've previously mentioned, some of these can be resolved. Confused, hmmm, so am I!!
Posted by Painted Soldier at 10:43 4 comments: