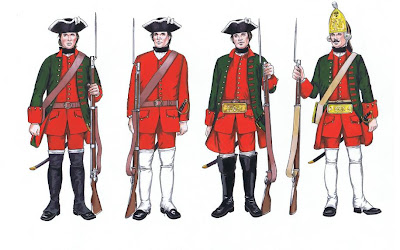 I just wanted to wet your appetites, you Greenwood & Ball fans, with an illustration from the new booklet 18thCenturyPress is preparing at the moment on the Russian Army of the SYW.

This will be the third in the series following on from No1. Prussia and No.2 Austria.
Release date will be early next year - well that is the plan anyway. My compliments to Pete the illustrator who, I think you will agree, has a fine eye and an even finer drawing hand!

I'd like to hope that we could embark on the forth booklet towards the end of 2012 and to that end I'd like to invite ideas from you as to which nation we should cover next. All except, I think, the French whose army was so large that two booklets would be needed. So, leaving them aside, whose army should be next? I'll do a poll.
Posted by Painted Soldier at 21:18 5 comments: