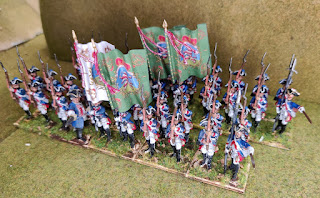 I've just finished this regiment with the new flags from Frederic Aubert.

Posted by Painted Soldier at 10:46 No comments:

SYW Battle – the Reichsarmee against the Prussians 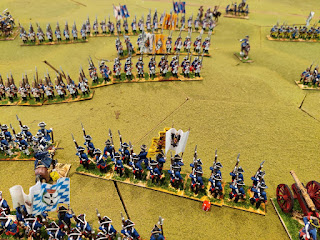 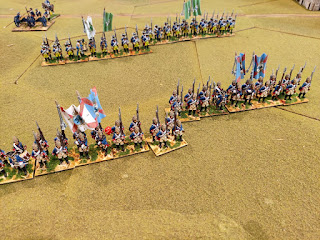 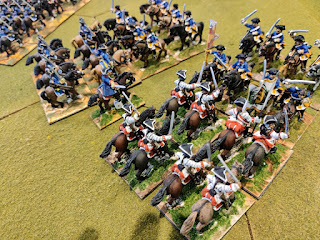 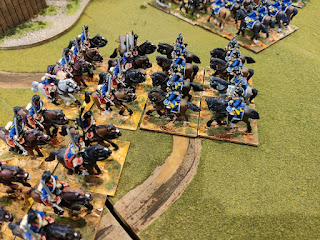 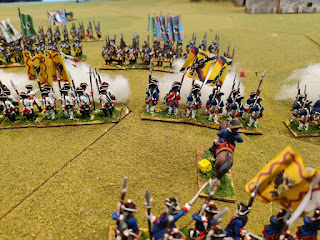 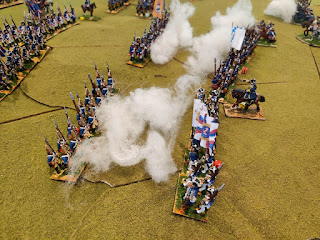 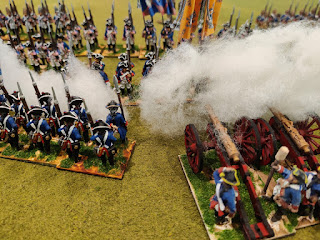 We played a 28mm battle recently that saw a larger Reichsarmee (RA) being well and truly 'duffed' up by a Prussian army. On the RA side there were four brigades of rather indifferent infantry, two batteries of artillery and a brigade of cavalry on either wing. The Prussians had two brigades of infantry (10 battalions in total) advancing quickly in echelon against the enemy centre on the hill. They were served by a lacklustre Prussian battery of 6pdrs as well as some jaegers who pottered around not doing much. On the right wing they had two regiments of dragoons and on the left a single Cuirassier regiment.

We used the rules Honours of War by Keith Flint.

The poor RA diced for generals' capabilities and immediately had a C-in-C classed as 'dithering' and that set the tone for the day. Both RA cavalry wings put up a poor performance and the only highpoints were the performance of the 12pdr battery and Hesse Darmstadt infantry (penultimate picture). These two units actually routed some Prussian battalions but otherwise the day was rather quickly lost with the RA scampering from the field with great alacrity. Sadly the RA C-in-C was captured as he could not chose between his horses to expedite his escape. Dithering to the last minute.