Whose makes these figures?

Does anybody know who is the manufacturer of these very nice Franco-Prussian War French?
They look like 25/28mm and foolishly I saved the images without noting who sold them.

Posted by Painted Soldier at 10:45 No comments: 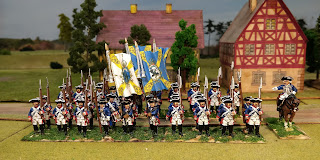 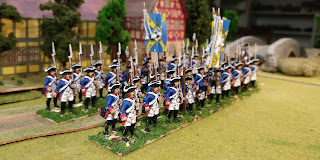 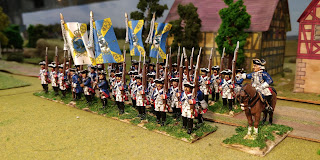 This regiment had a somewhat checkered history as you will see from the Kronoskaf description: “In 1757, the regiment took part in the invasion of Bohemia. On May 6, it fought at the Battle of Prague where it was deployed in the first line in Hautcharmoy's Brigade. On June 18, the regiment took part in the Battle of Kolin where it was deployed in the van at the extreme left under Hülsen. Around 2:00 p.m., this corps assaulted and took Krzeczhorz Height. At the end of the afternoon, it managed to capture a nearby oak-wood but, being totally unsupported, soon lost it. Fierce attacks of the Austrian cavalry then forced Hülsen to retreat with heavy losses.

On September 7, when an Austrian force under the command of General Nádasdy attacked Winterfeldt's isolated corps in the Combat of Moys, one battalion of the regiment was sent as reinforcement by Bevern from Görlitz. On November 22, the regiment took part in the Battle of Breslau where it was deployed in Prince Carl von Bevern's Brigade, in the first line of the infantry centre. When the brigade of Prince Ferdinand was repulsed a first time, the regiment, counting many recruits, advanced from Gräbschen (present-day Grabiszyn) and came to its support. When Prince Ferdinand's Brigade retired, the regiment fled to Gräbschen but it was soon driven out of this village by Austrian troops and took refuge in Breslau. Schultze, its colonel, died from his wounds a few days after the battle. When Breslau capitulated, 90% of the regiment deserted and it had to be reconstituted in Berlin. “

Figures are from Crusader and they are nice figures although not well manufactured. 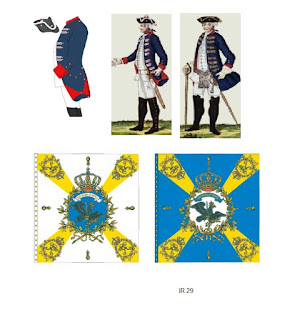 Posted by Painted Soldier at 11:49 No comments: 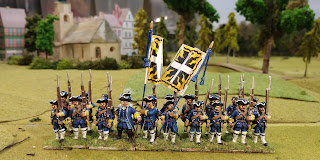 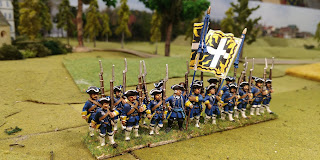 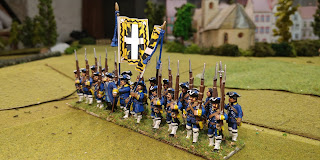 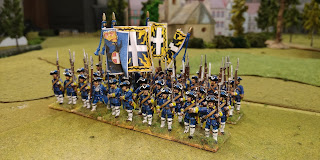 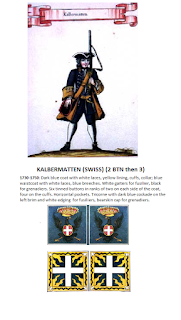 I found some more figures so have decided to add two battalions to my Piedmontese in anticipation of a game this summer. As I have already done 12 battalions and these were all 1st battalions, I have decided to add a second battalion to Regiments Kalbermatten and to Keller, both Swiss units in Piedmontese service. The first battalion was painted back in December 2015. As I used remnants of figures left over they are from a variety of manufacturers so there are some wide uniform variations which I don't mind.

The bottom picture shows both battalions together.

Posted by Painted Soldier at 12:41 No comments: 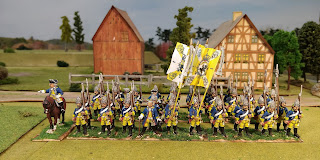 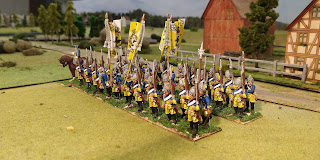 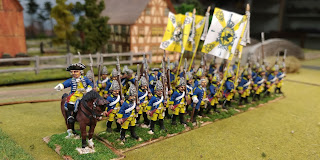 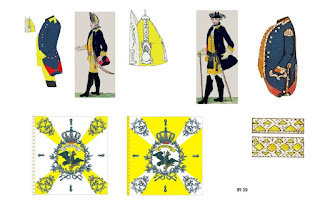 Just to warn you that this will be a very yellow week! This Prussian Fusilier regiment has an overkill of yellow and later this week I will post another WAS Piedmontese battalion with yellow facings. Yellow is a tricky colour to paint as it frequently needs two or three applications and, to get some depth, I use an undertone of Sand colour.

This regiment was present at the battles of Prague, Breslau and Leuthen.

Posted by Painted Soldier at 12:34 No comments: 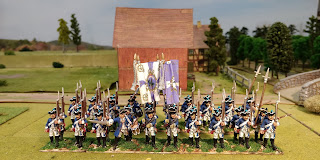 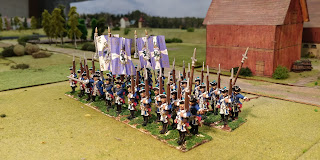 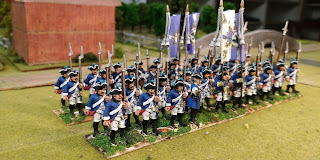 This is probably a Prussian regiment you have never seem before because it was composed of captured Saxons, many of whom took the first opportunity to desert.
In 1756 the Saxon army surrendered to the Prussians at Pirna. Frederick forcefully created 10 new regiments from these chaps plus a further 5 converged grenadier battalions. Most deserted within months although this regiment IR55 seems to have lasted longer than the others. It would probably have been better to have mixed the men in with existing regiments rather than creating new ones and Frederick's poor judgement was repaid with mass desertion.

More details are available on Kronoskaf. Figures are mostly from Foundry (standard bearers are from Crusader) and it is rather nice to return to them as they are simpler than those from Black Hussar.

Posted by Painted Soldier at 14:25 No comments: 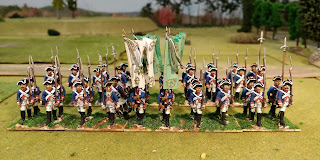 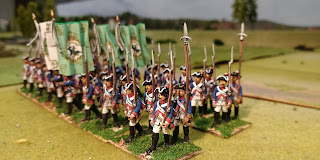 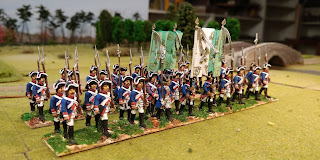 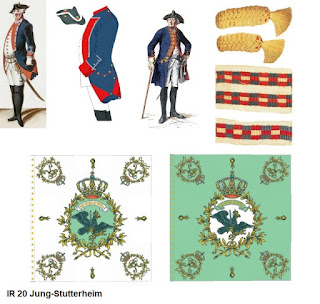 Another fine Prussian Musketeer regiment with interesting flags although I wonder whether the shade of green is correct. Figures are again from Black Hussar.

Posted by Painted Soldier at 12:12 No comments: