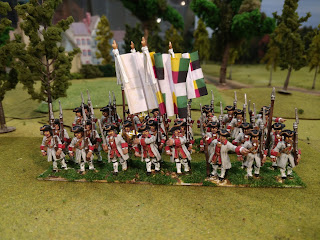 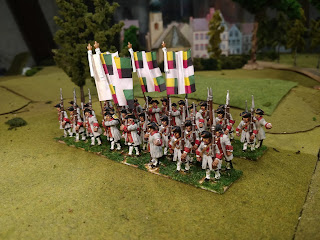 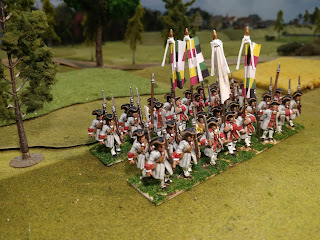 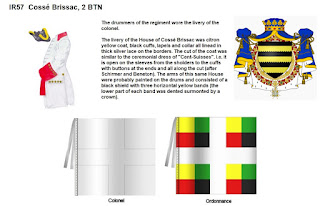 Kronoskaf has a strange comment concerning this regiment: “In 1757, the regiment was considered as cheerful, noisy but otherwise well behaved.” I am not sure what this means – does it mean that it was reliable in battle or that it was somewhat rowdy? It certainly had a rough time at Rossbach despite it's colourful flags.

Posted by Painted Soldier at 15:39 No comments: 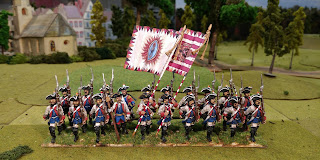 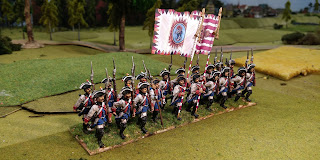 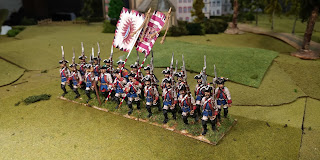 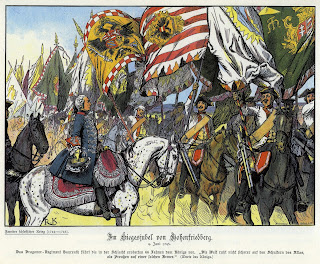 In my previous post I said I was going to be painting an unusual Austrian Regiment and here it is.

This is taken from Kronoskaf: “For the moment we have very few information on the uniform in 1756, at the outbreak of the war. Most of our references describe the uniform in 1762. However, Muhsfeldt and Schirmer mention that, in 1756-57, the coat was white lined red (therefore red turn-backs), the distinctive colour was red and the waistcoat and breeches were blue.N.B.: in his work, Gustav Ritter Hubka, mentions that, from 1714 till 1767, the uniform of this regiment had ponceau red lapels and cuffs, and yellow buttons. Furthermore, from 1757 to 1767, he mentions a blue waistcoat and blue turn-backs with white breeches. Even though, this description seems very surprising, it must be pointed out that Hubka has been Oberlieutenant and Regiments-Adjutant in this regiment, so he might have had access to privileged sources.”

I am going with the colour scheme of Gustav Ritter Hubka so white coat, blue waistcoat and turnbacks. White trousers. Red cuffs and lapels.

As for the flags, they were probably not used by this regiment which spent most of the WAS in Italy and was not present at Hohenfriedberg. But I think the red-white stripes perfectly match this regiment. One of the problems of painting the Austrians for the WAS is not the number of strange and unusual designs (which I rather like actually) but rather attributing them with any certainty to any particular regiment.

The second battalion and grenadiers will follow later this year. Figures are from Sash & Sabre. 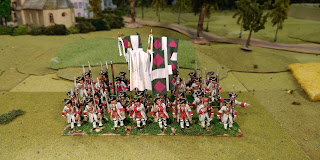 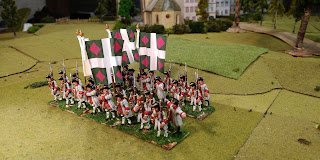 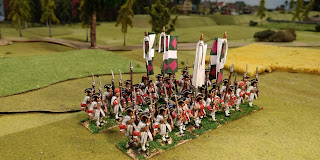 This regiment had hard fights at both Minden and Warburg. At the latter, where it was initially kept in reserve behind the centre, it vainly tried to rescue the Bourbonnais regiment, losing about 800 men. Out of the 49 officers present, 33 were killed or wounded.

Posted by Painted Soldier at 12:49 No comments: