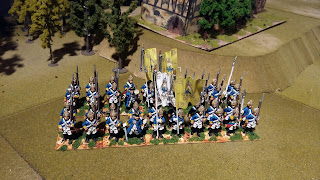 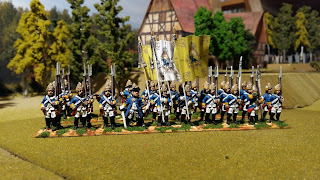 Another Prussian fusilier regiment IR 43 - figures are mostly from Crusader with some different command from Foundry plus some characters. I especially like the chap taking a swig from a bottle.
Posted by Painted Soldier at 14:29 1 comment: 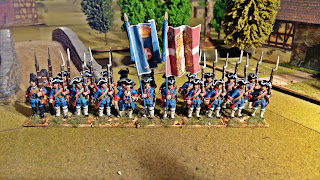 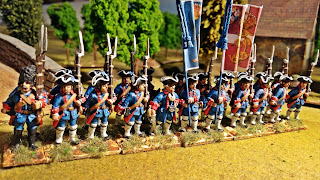 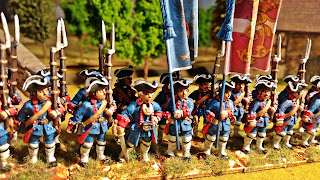 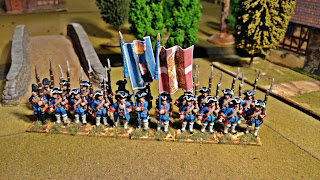 This was a two battalion German regiment in Piedmontese service in the WAS. I am just fielding the first battalion in my mini-army of 9 battalions (7 of which are now finished). I love the baroque flags.

The figures are mostly Crusader from their Russian range although the grenadiers are Austrians. The officer and drummer are Copplestone castings from the Russian Foundry range. Using Russians as Piedmontese works well except for the sabre but that is a small issue.

Who are they going to fight? I have not decided for sure but I think probably the Spanish will be a worthy opponent.
Posted by Painted Soldier at 09:41 2 comments: 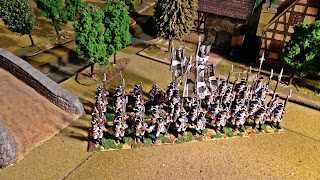 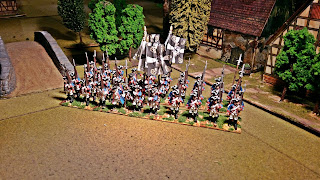 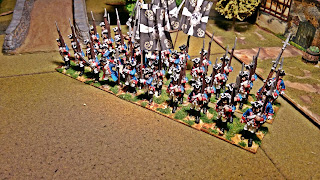 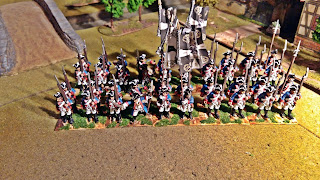 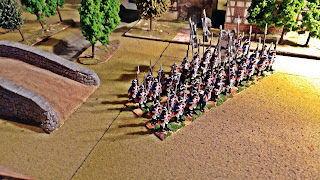 Fine Foundry figures, at one time the best and most complete manufacturer of SYW figures. These were sculpted by Copplestone and remain, in my opinion, the best. Sadly the later ranges from Foundry, the French and British, were not sculpted by Copplestone and are markedly inferior. Just by looking at the Foundry website you should be able to distinguish the sculptor. They have hived off the French and British to another website and retained the Prussians and Russians but, beware, not all the Prussians and Russians are the original sculpts.

I mix this range in with Crusader but I prefer painting the Copplestone faces which are hugely expressive.
Posted by Painted Soldier at 09:11 No comments: 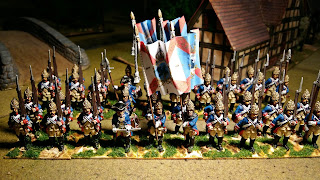 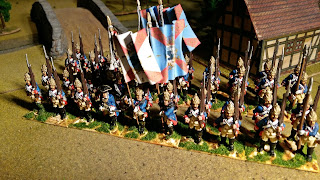 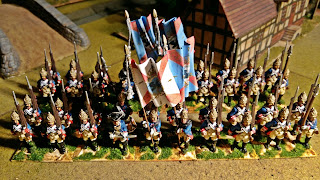 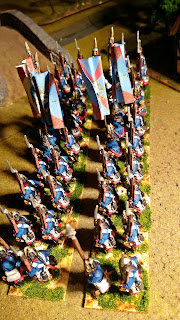 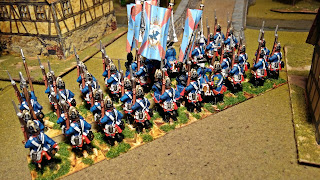 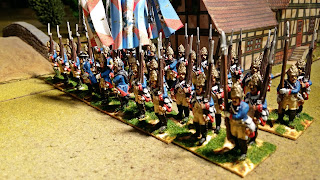 Crusader 28mm Fusiliers (but one Foundry officer lurking in the second battalion) parading in Wesel.

According to Kronoskaf  "In 1756, the regiment continued to assume garrison duties in Wesel. In March 1757, when the French started the invasion of Hanover, the regiment evacuated Wesel and joined the Allied army under the command of the Duke of Cumberland at Bielefeld. It took part in minor actions where it suffered some 200 casualties. It later retreated to Magdeburg, loosing more than 200 men to desertion."

From my Savory I recall reading that Wesel had a garrison of 6 battalions but they were never specified. So here is a regiment that you can field with the Allied army. Fusiliers are under-represented in most SYW Prussian armies and I'm not sure why - their hats are very cool!
Posted by Painted Soldier at 11:00 2 comments: