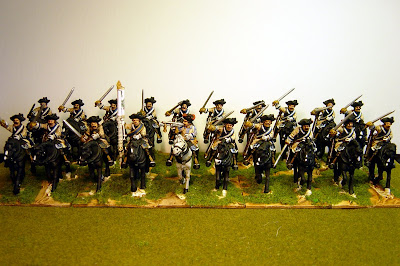 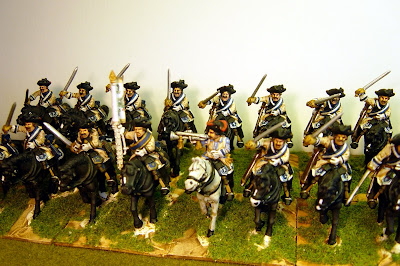 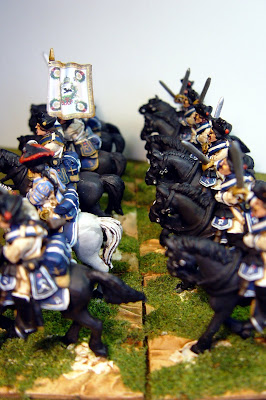 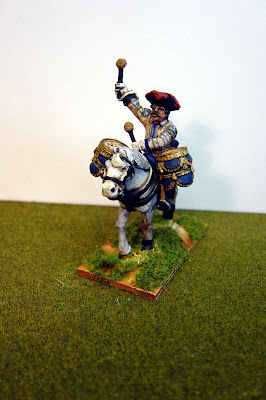 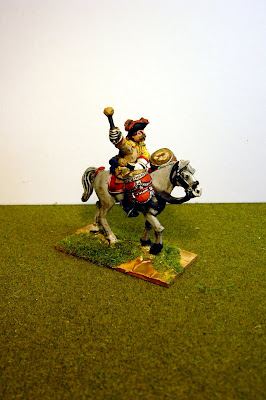 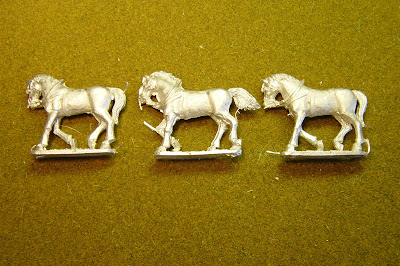 Foundry 25/28mm SYW Prussian Cuirassiers painted as the 3rd Regiment. These have changed as the right arm is no longer separate and they are now, more or less, the same figure, although you do get some facial variation. Also, if you look at the bottom picture, you will see that there is considerable flash on the horses. You don't really expect to buy the most expensive figures and then have to spend a great deal of time cleaning them prior to painting.

Still, the kettledrummers are nice figures. I've done one for the 1st and 3rd Cuirassiers. 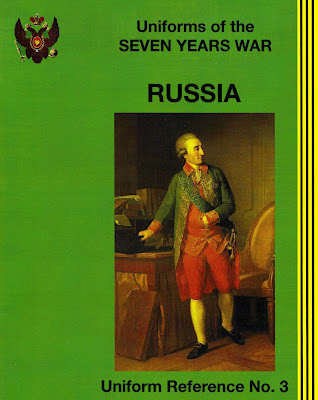 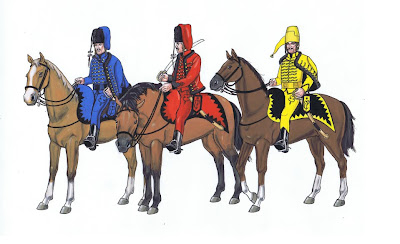 The Russian booklets are here! The top picture is the cover and the hussar illustration has been taken from inside, just to wet your appetites.
Here is the link

Sorry about the length of time it has taken to produce the booklet but I hope it will have been worth the wait. 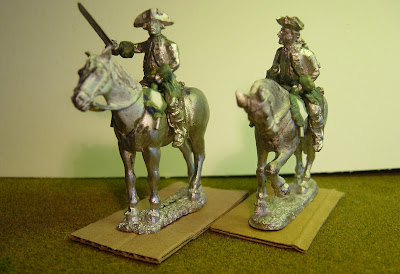 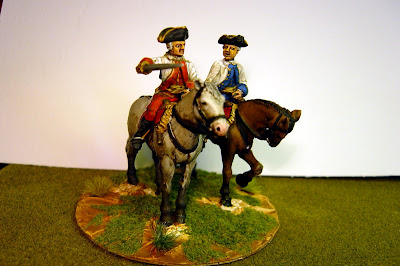 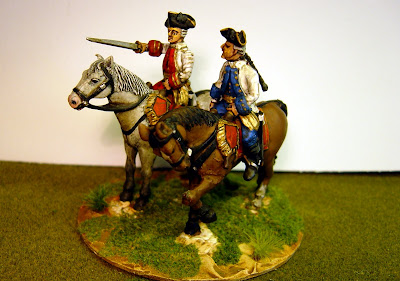 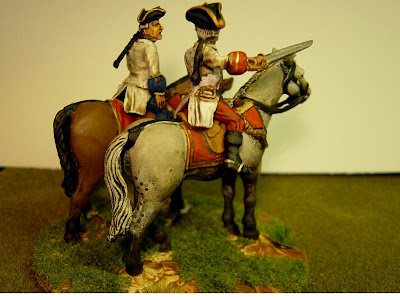 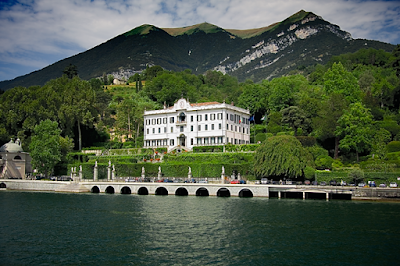 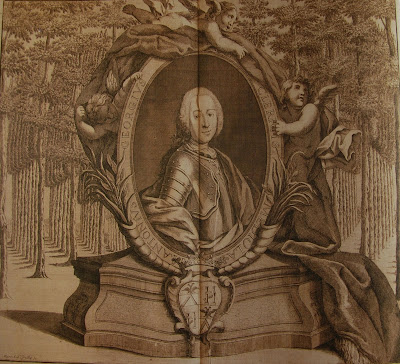 The commander of my Austrian Army's front line is Lieutenant-General Marquis Antonio Giorgio Clerici and he is assisted by Colonel von Langlois of IR30 Prié-Turinetti, with blue facings.
Clerici has been a difficult man to track down but I have found this out. He was a member of a grand Milanese aristocratic family and was also Baron of Sozzago, Marquis of Cavanego and a Knight of the Golden fleece. He is described as “...of great intelligence and generosity” and one can hardly disagree with the latter term as he inherited a fortune and left very little to his surviving daughter. He was apparently devoted to his military career becoming a Major General of Artillery in 1746 and Lieutenant General in 1755. He was wounded during the early SYW campaigns against Frederick II in 1756 and, consequently, he laid down his arms to embark on a diplomatic career. He was also a connoisseur of art as he commissioned Tiepolo to paint the frescos depicting "The Fight of the Sun in the Olympus" of the very large ceiling (about 119 square meters) in the residential palace of the Clerici family in Milan. During his “intense existence”, Antonio Giorgio dissipated the wealth he had inherited. He died in 1768. The Palace in Milan became the seat of the law-courts and today it belongs to the Italian state while the Villa Simonetta is a music school. Claudia Bigli Clerici, Antonio Giorgio's daughter, was the last of the Clericis to possess the Villa Carlotta on lake Como. And that fine thought takes me to memories of holidays as a child on lake Como with the paternal Italian side of my family.
The figures are 40mm Trident AWI British officers and have been heavily converted, particularly the horses where I had to add pistol covers on both. The figures on the horses are both the same figure. Clerici, on the left, has a new head, and Langlois, on the right, has kept his head but has a new right arm. The sharp-eyed amongst you will note that the finished 'Clerici' head is different from the top picture and this was because I did not like the first head I gave him so I decapitated him and gave him a new Front Rank head. I think perhaps, living in France as I do, the practice of decapitating aristocrats, which was once a national past time, must have rubbed off on me. In terms of compatibility with S&S horses, Trident's are huge in comparison and for that reason will have to be limited to mounted officers.
Lastly I have shown the only known portrait of our hero and this was kindly supplied by Villa Carlotta. 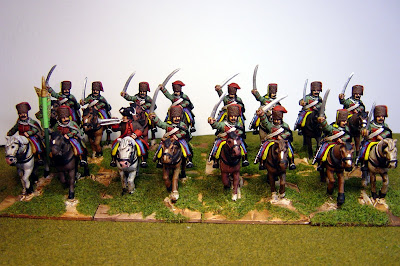 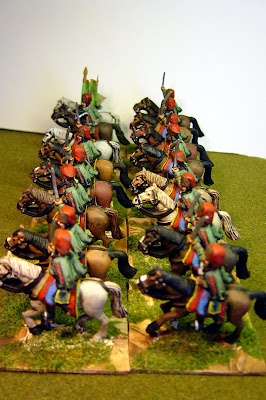 This Hungarian Hussar regiment in Austrian service was raised in 1696 and was a very busy unit being involved in campaigns against the Turks, in Italy, in Flanders (it was at Malplaquet), on the Rhine, in Bavaria during the WAS and even, briefly, was stationed on Corsica. During the SYW it participated in the battles of Lobositz, Prague, Kolin, and the raid on Berlin. Thereafter it appears to have been in service with the Reichsarmee.

The colour scheme of apple green and blue is rather daring! Figures are Crusader 28mm. 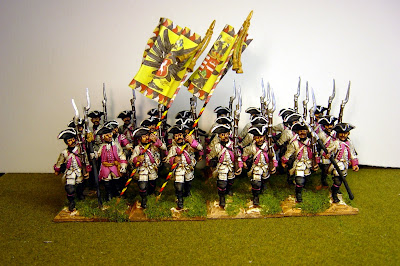 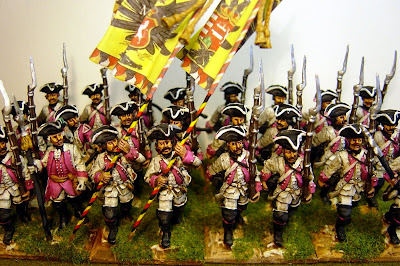 This is the second battalion of de Ligne. The officer has followed regulations by wearing white trousers but, being slightly rebellious and a follower of fashion, he has kept his stylish pink 'soubise'. An interesting observation was made on TMP by Christian Rogge concerning pink gaiter straps and I have given a number of the figures this added embelishment - see here 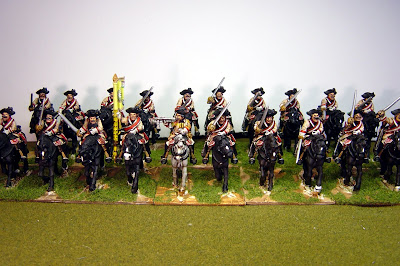 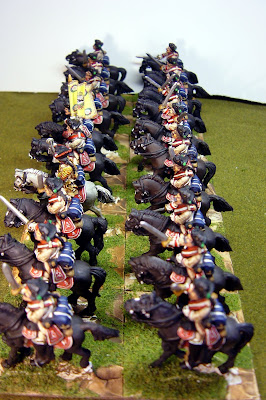 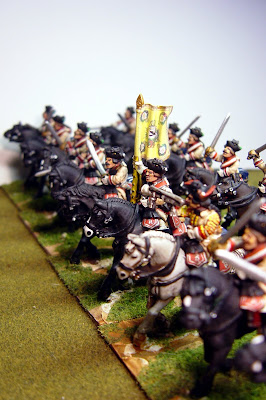 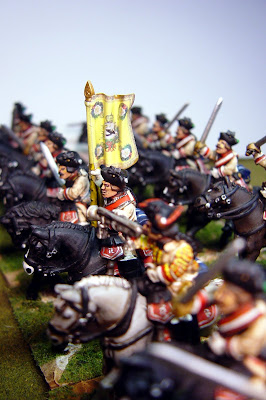 The 1st Prussian Cuirassiers of the WAS/SYW period, also known as the Buddenbrock Cuirassiers. Figures are by Foundry and are the old charging figures with separate right arms, which allow for a wide variety of arm poses, and which is why I think these are really great figures. I have another Cuirassier Regiment to paint soon using the new figures and I'll show you the results. For the life of me I don't know why a company like Foundry would take a brilliant sculpt by Copplestone and tinker with it to produce a lesser next generation but I can only suppose it relates to moulds and making life easy for figure production.

On the subject of the Greenwood & Ball new Russian booklet, it is at the printers as I write this so we are very close now.
Posted by Painted Soldier at 09:28 5 comments: