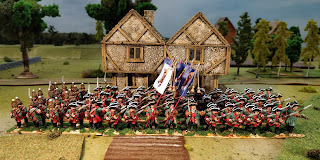 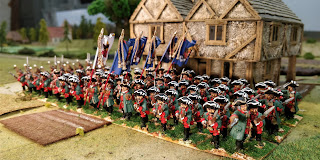 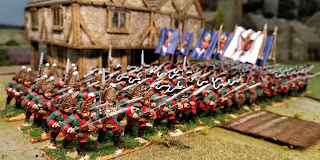 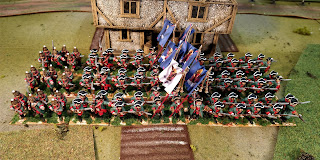 Here is a three-battalion regiment of the Observation Corps. There were supposed to be 5 regiments (plus a Grenadier Regiment) but the second was only partially raised and was never fielded. We know the style and colour of the flags but don't know which colour was carried by which regiment. It might be reasonable to assume that the Grenadier Regiment carried the red ones, but as to the rest it is conjectural. I will give dark blue to the first, grass green to the third, light blue to the fourth and yellow to the fifth.


The figures are a mix of Foundry and Front Rank. Foundry produce OC command in winter coats but not the infantry and there are particular uniform differences between the Observation Corps and the rest of the Russian Line. That is why most of these figures are from Front Rank. For uniform details see my booklet from www.18thCenturyPress.com


I have really struggled with these figures because I am so used to painting a march-attack pose rather than this advancing one and, furthermore, Front Rank always invite a lot of painting work to get a decent result partly because the range is so old and partly because of the sculptor's style of work.


Raised in 1756 (and disbanded in 1760) the Corps was the brainchild of Shuvalov and in his mind it was to be a defensive min-army of 30,000 (with extra reinforced artillery). It was planned that he would command it in the field in person but when that time came he told the Empress that he was not well enough to do the job and he handed his pet project over to another general. It never consisted of much more than 12,000 men and was largely destroyed at Kunnersdorf. Lastly it is worth noting that the rankers were not conscripted serfs, as in the rest of the army, but recruited from the urban proletariat. It's valiant defence at Kunnersdorf, and in particular the Muhlberg, is well documented.

Posted by Painted Soldier at 16:19 No comments: 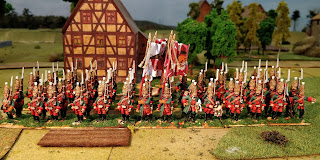 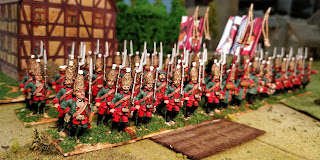 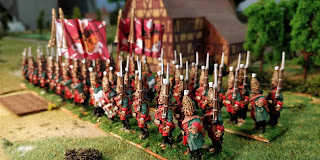 The last Grenadier regiment is finished. The figures are mostly Foundry although there are some Front Rank officers in there.

Posted by Painted Soldier at 17:38 No comments: 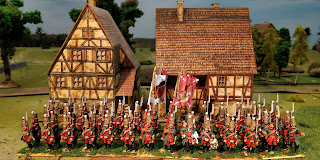 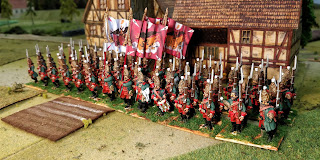 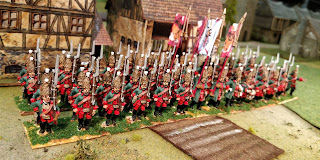 The third regiment is shown here and the 4th will follow quite quickly. Then it is on to the super-large Observation Corps.
Posted by Painted Soldier at 16:29 1 comment: