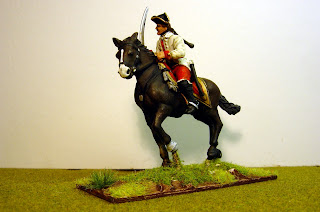 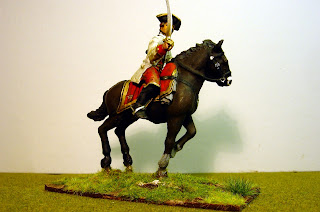 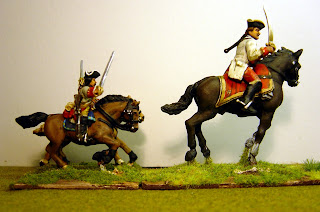 This is my first Austrian cavalry general for my 40mm army. The figure is from Trident and he is intended to be used for AWI armies - he has had a bit of a conversion to make him suitable for the WAS/SYW. The horse sculpture is very fine I think and conveys rather well the sense of a gentle canter. In the third picture you see a 40mm comparison with a 25/28mm cavalry figure from Front Rank.

When I select who to paint, I like to choose someone inspiring and I think Berlichingen fits the bill. Most of us have heard of Romer who commanded the Austrian left wing cavalry at Mollwitz - he smashed the Prussian cavalry on his wing and almost won the battle although he was killed in the same battle. Berlichingen commanded the right wing of the Austrian cavalry and this is what Duffy said, quoting someone who was there, about their poor performance:

"The cavalry of the Austrian right at last began to move, but since the infantry refused to advance [against the Prussians], our cavalry became so disheartened that it could in no way be persuaded to attack, even though General Berlichingen tried to inspire them through his personal example. He spurred to within twenty paces of the enemy, he exorted, he threatened, all without any effect. He became so angry that he split the heads of two cavalrymen who were riding away, and he cut several others down from their horses....."

Our hero then appears again at Hohenfriedberg four years later where he was captured by Prussian hussars. On his capture he muttered at the Zeiten Hussar: "Do I have to be taken by a mob like this? I saw the Prussian Hussars at Mollwitz. They're a tatty crowd and they ran for their lives at the sight of the first Hungarians." The hussar punched him in the head, Berlichingen'a hat fell off, then his wig and then he fell off his horse.
Posted by Painted Soldier at 16:21 4 comments: 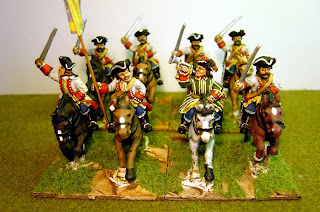 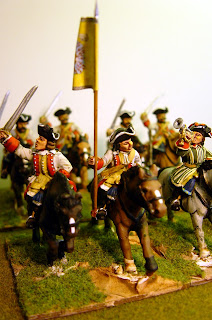 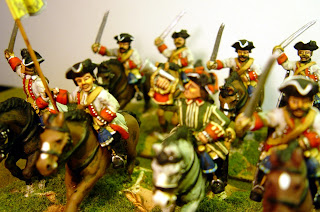 This is one of many noble regiments in the French army in the familiar light grey coat with red facings.
The trumpeteer uniform is entirely my creation as there is no recorded description of the original.
Figures are by Front Rank. 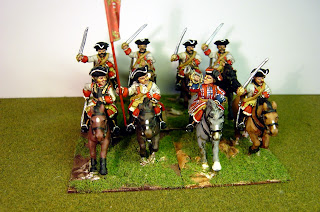 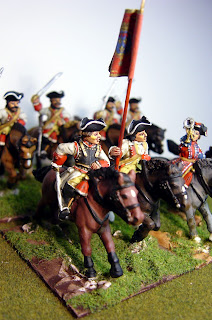 Here is another one of those ubiquitous French cavalry regiments (of the WAS/SYW era) dressed in grey and this is another ‘de sang royal’ regiment – Orleans. I’ve never been fond of the Orleans branch of the Bourbon dynasty as – besides the Regent in the early Louis XV period – they were frequently a scurrilous bunch of treacherous dogs concerned more for their own advancement and place than the overall good of their country.
All figures are by Front Rank.
Posted by Painted Soldier at 10:19 5 comments: