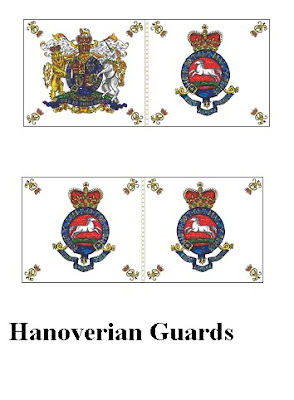 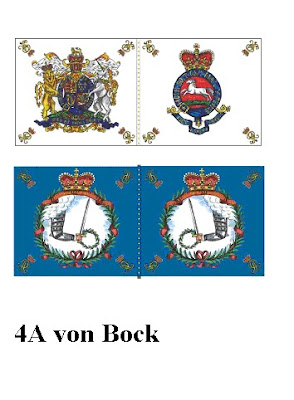 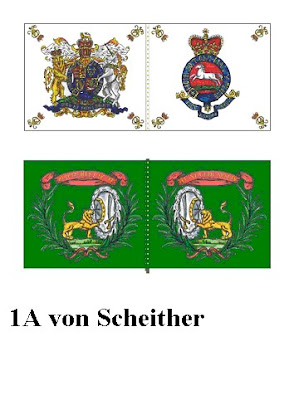 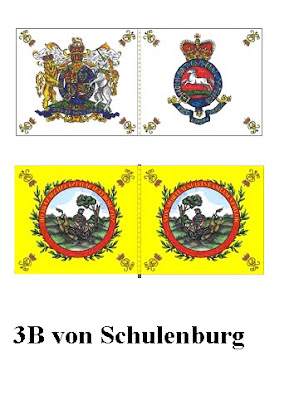 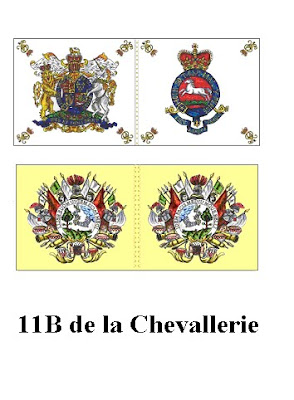 I've had a number of enquiries about how I do my flags and I'm showing some samples here. I take no credit for the original artwork as all these images come from the Kronskaf website (see link on the right). I've cut and pasted them into Microsoft 'Paint' then duplicated the image and turned it round to match up.

To reduce or enlarge the flag I simply cut and paste to Microsoft 'Word' (I assure you I'm a complete computer dunce in truth) and pull on a corner to reduce or enlarge. You then need to experiment with printing them out to ensure you have the correct size to fit the flag staff - the bigger the better as far as I am concerned.
Then always keep one saved in the correct size so that when you come to add new flags you can scale these against the saved ones which you know are correct.

Now if that is too complicated, drop me an email and I can send you these via email in 'Word'. If you would like some flags of Hanoverian regiments I have not sampled above, then let me know and I can do them for you. I think these will work in all scales up to and including 28mm figures (which is what I used them for).
Posted by Painted Soldier at 12:59 2 comments: 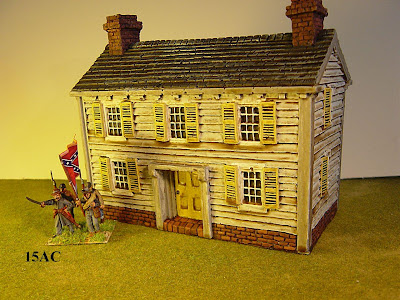 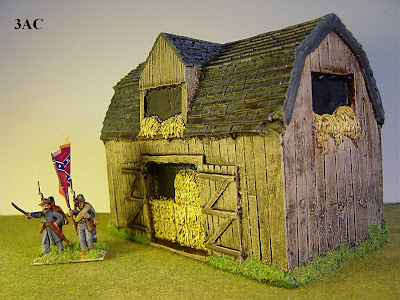 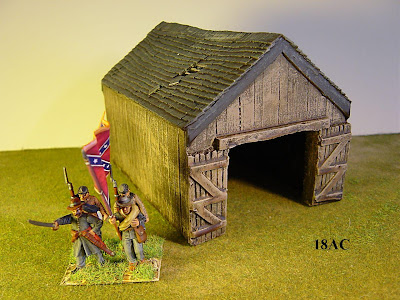 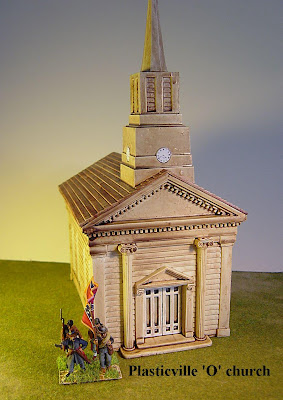 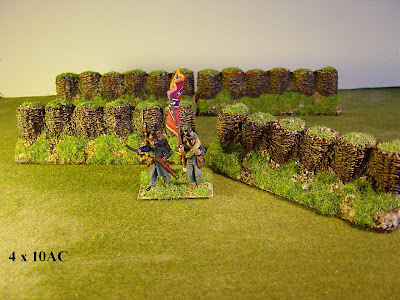 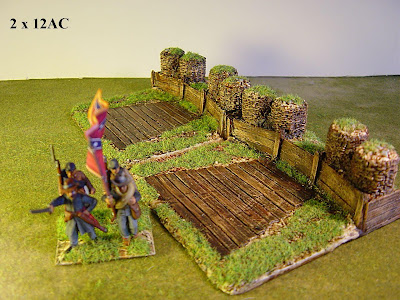 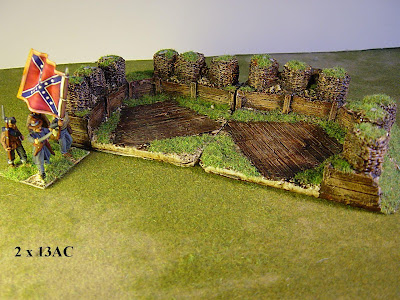 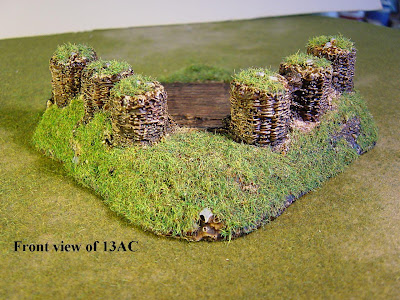 This now completes the buildings I need for my ACW battlefield.

The church I bought a few years ago when I started a project of 40mm AWI and I bought it on eBay – it is a Plasticville 'O' gauge Church that is closer to 40mm but still looks good for 25mm.

The remaining pictures show Hovel’s field fortifications which will, of course, be useful for many periods. They sell single rows of gabions, corner gun emplacements and ‘centre’gun emplacements, all of which can be used in any combination to make redoubts or fleches.

Back to painting figures next week.
Posted by Painted Soldier at 11:48 No comments: 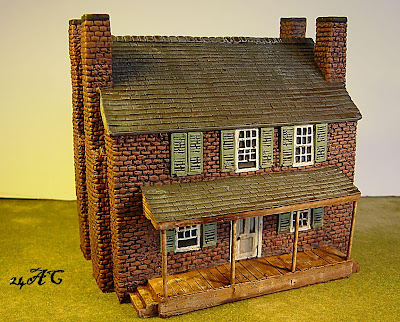 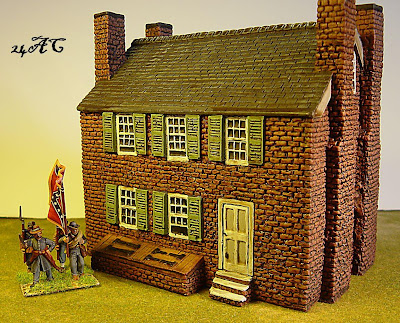 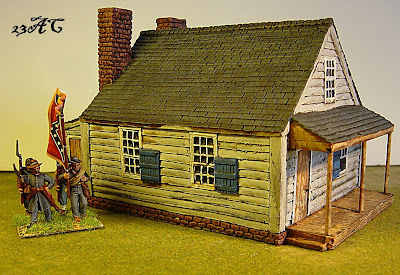 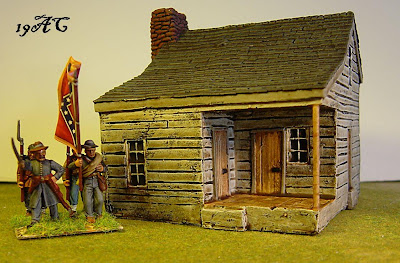 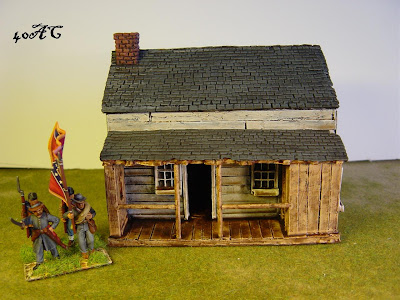 While I was at SELWG last Sunday I purchased from Hovels a number of ACW 25mm buildings for my table. I've started painting these up and I'm now showing the first four. They are resin and I've put the manufacturer's code on each picture. They are very nice and substantial and, I think, paint up well.

I've added some chopped-down toothpicks in place of the supplied railings as I prefer the thinner look. They were all given a black wash, then dry brushed and finished off with a coat of Army Painter. I like the finished result which gives a very weather look. Next week I'll post pictures of the remainder of the buildings I bought and then for the rest of the year will be focused on the last touches to my ACW armies.

I may digress for a week or so painting up some Eagle Miniatures French SYW I also bought at SELWG. Size-wise these look like they might be compatible with Foundry/Front Rank/Crusader but we will see. I'm not one hundred percent convinced by the raw metal figures but the painted results might just work.
Posted by Painted Soldier at 13:09 2 comments: 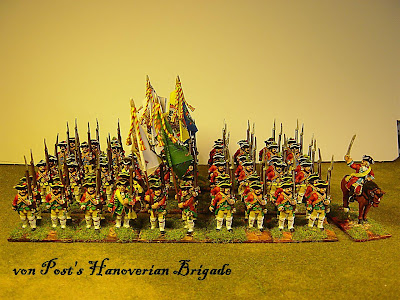 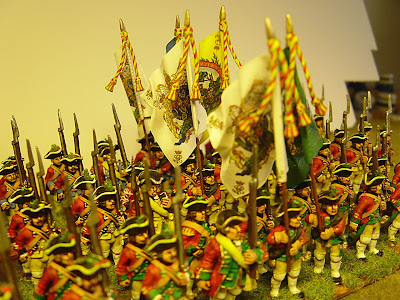 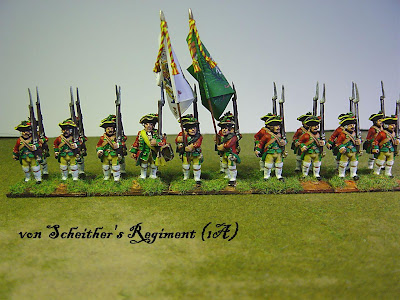 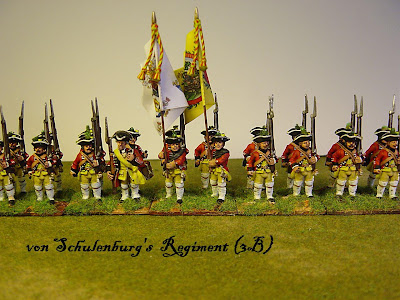 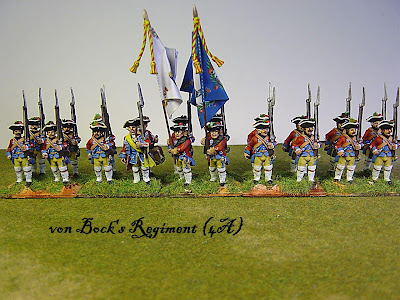 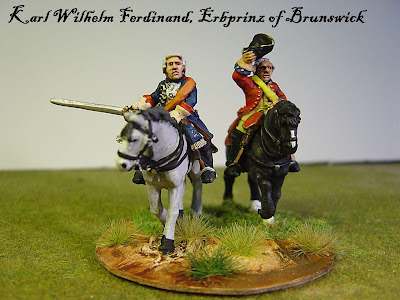 Some of you may have noticed that I have been in a Hanoverian mode for some time. To reinforce that I’m putting up pictures today of a new Hanoverian Infantry Brigade for my SYW/WAS army.

Actually, I have been finishing off my ACW armies as well and the Confederates are largely ready – just a couple of artillery batteries to go which I will pick up at SELWG in a week’s time, but more on that later.

So this new Hanoverian brigade starts off the third division. I always like to paint generals first and I’ve also done a command base of the Erbprinz of Brunswick. He was born in 1735 so he was in his early 20’s at the beginning of the SYW and I have tried to paint him as a young man. He is a Foundry conversion; the hat taken away, a sword added, a sash added and the face thinned down considerably. The original Foundry figure is a very nice, but somewhat portly, Prussian officer. This gentleman, nephew of the C-in-C Prince Ferdinand, eventually becomes Duke and meets his end commanding the Prussian Army in 1806 at the battle of Auerstadt. A life in the military saddle, you could say.

The top two pictures show the entire the Brigade assembled under its commander Major-General von Post. Then each regiment is pictured individually.

On a related subject, Christian Rogge, who you could say knows a few things about the SYW, has sent me a copy of a document taken from French Military archives, that lists every officer in the allied army of the rank of Major and above. This list was apparently
captured by the French during the SYW and dates to 1760. It lists them by nationality and includes Britain, Hanover, Brunswick and Hesse. It will take me time to decipher the handwriting but I hope to post these lists on this blog sometime soon. This will be very useful for those interested in the SYW as it not only shows ranks but dates of promotion and in some instances, regiments they commanded which is useful for painting purposes.

Lastly, I’m off to the UK next week – the first time in four years. I will be attending SELWG, in south London, on Sunday 18th so if you are going perhaps we could meet up in the bar for a drink.
Posted by Painted Soldier at 10:53 8 comments: