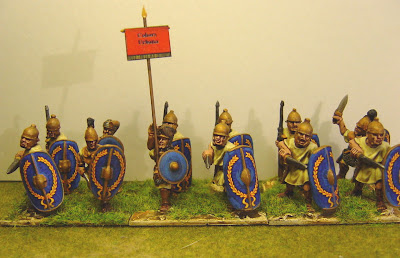 To be continued…………
Posted by Painted Soldier at 14:33 No comments: 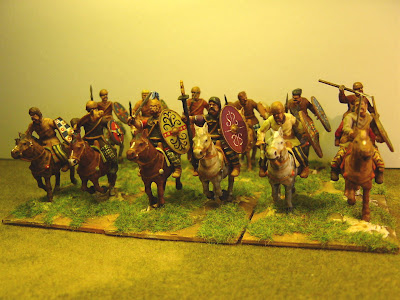 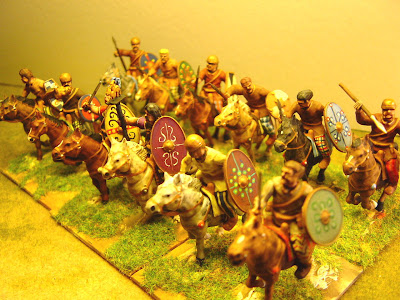 Here is a box of Wargames Factory Celtic/Gallic plastic 25mm cavalry. Now, generally speaking, I’m a great fan of things cheap (no designer labels for me – grunge will do!) which is partly because I live in the countryside without much access to those things that thrill my Kensington friends. Such a predilection or even predicament applies to my wargaming hobby too and most of these new plastic ranges are a boon. I think you know where I am going with this.

Sadly, these Wargames Factory cavalry are quite horrible in the raw plastic but, and you may or may not agree, with paint applied, the results are just passable. But, when you first open the plastic packaging, you may, like me, utter a palpable groan of mild agony which is akin to being agog with indifference. The packaging (or it may be the website) proudly states that these horses are ponies to explain their diminutive size. Fine, I accept that. But the definition on the ‘ponies’, the chain-mail and the faces is so lacking that even someone with 20-20 vision and an atomic microscope would have problems seeing what is what. But, bless them, they are cheap and very cheerful. So it’s the age old saga of price versus quality. If you want a hoard of Gallic cavalry in your army and want them cheap, then buy these. But, on the other hand, if you want your friends to drool and admire your magnificent painting, then buy another company’s figures (or buy these Wargames Factory figures and send them off to a professional painter for him or her to stress over). I have two more lots to paint and they have just shot to the bottom of the scheduling pile.

But I also hear you asking, “Quite what is this dude doing painting another army when he has all that other stuff to paint?” Ah, well thanks for asking. I have a secret surprise project (hence the original title to this blog entry) relating to 56BC and where I live.
No further clues will be given at the moment but I may drip-feed more clues over the next few months and you are most welcome to guess. But, given the results (so far) of the poll, I suspect this project will be a slow burner as you, my vicious task masters, order me in a different direction. And I thought slavery had been abolished!

Poll - What armies should I finish?

To help me focus I've started a poll which I'd really appreciate if you would enter.
Your voting will help me determine what you would most like to see.
I've left out the ACW as these armies will be ready soon anyway but here are the remaining options:

1) WAS/SYW French and British Allies. The latter are largely done (two and a half infantry divisions out of three are finished) and two brigades of cavalry out of a planned six. But the French have hardly been touched. I could certainly concentrate on getting a couple of French infantry divisions done so a game could be scheduled for the end of the year. Downside - figures have to be bought.

2)Napoleonic's Spain. Actually I already own enough Victrix and Perry boxes of plastics to paint up about a Division a side (24 figures a battalion)plus there is the bonus of knowing that the Perrys are about to release Dragoons and Hussars.

3) Eastern Renaissance - Poles and Russians. These have been moving ahead and with armies of only 12-14 units a side might be completed the fastest. Downside - figures have to be bought.

4) Ancients - secret project. There will be more on this in a post this weekend but I can say that it involves plastics and the year 56BC.

5)40mm SYW Prussians and Austrians. I could certainly paint up more infantry and Chris Hughes of Sash and Saber has promised cavalry and artillery this year.

Let me know what you think please.
Posted by Painted Soldier at 11:35 12 comments: 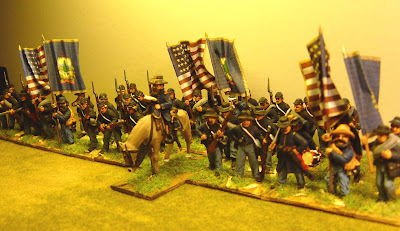 Back on the ACW. To update things as they stand now, the Confederates are done and 5 out of 6 Union infantry brigades are now finished. All I have left to do are three more Union battalions and a couple of batteries of artillery. Then we should be ready for our Spring game and a try out of Carnage and Glory II's ACW computer rules.

The brigade pictured above consists of veteran Vermont battalions. The figures are mostly Perry plastics but with the occasional Dixon metal thrown in - standard bearers and drummers.

I really like the way I have managed to curl the flags and I have found that the best way to do this is as soon as they are stuck together and put on the poles. I use Bâton de colle (or just Pritt Stick in English) to stick the flag on, then immediately curl the flag with my fingers until it looks right. Then set it aside to dry. Once dry, I paint the white line around the flag (where the two sheets have met) and put a drop of Superglue to make sure the flag will stay in position. I will need to go back and rework some of the flags I have in other armies. 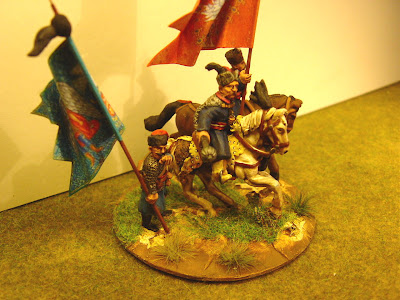 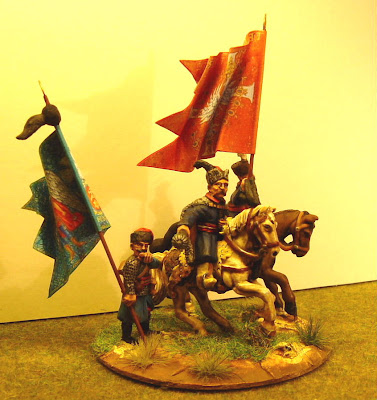 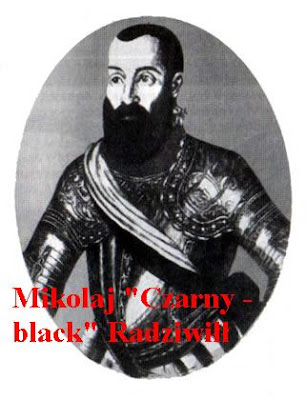 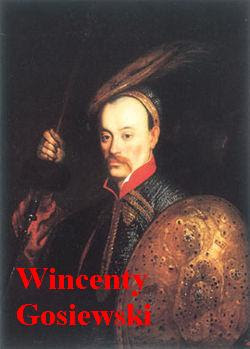 TAG calls this pack “Polish General (Janusz "the black" Radziwill, Grand Hetman of Lithuanian)” but Black Radziwill (1515 – 1565) had a beard and looked like the picture I have shown and his first name was Mikolaj. The Radziwill they have depicted is meant, I think, to be JANUSZ "THE TRAITOR" RADZIWIŁŁ (1612-1655).

Who wants their army commanded by someone called The Traitor? So I looked for someone more inspiring and found Wincenty Aleksander Korwin Gosiewski and here is his potted wiki biography. He only appears to have switched sides a couple of times (!) so I think he is an appropriate individual to command my army. The figure on foot originally carried a carbine but I have trimmed this away and given him a Hetman standard (the black ball and feather) as well as a flag.

Wincenty Korwin Gosiewski (ca. 1620–1662) was a Polish politician and military commander, a notable member of the szlachta (nobility).
He was born some time about 1620 as Wincenty Aleksander Korwin Gosiewski to Aleksander Korwin Gosiewski, a renowned Polish-Lithuanian diplomat and the voivode of the Smolensk Voivodeship. Little is known of his early life except that he studied at the University of Bologna. By 1646 he had received the title of ‘Master of the Pantry’ for Lithuania. Between November 21 and December 24, 1650 he also served as the marshal of the Sejm. At the same time he must have served in the Polish–Lithuanian army since in 1651 he was promoted to general of artillery.
The following year Gosiewski became Grand Treasurer of Lithuania. At the same time he continued his military career and in 1654 he was promoted to the rank of Field Lithuanian Hetman, one of the two highest ranks in the Polish–Lithuanian armed forces. As such he took part in fights against the Cossacks during the Chmielnicki Uprising, - Battle of Loyew (1649). During the Swedish invasion of 1655, known as The Deluge, Gosiewski at first submitted his forces to the Swedish King Charles X, following the politics of de facto overlords of Lithuania, Princes Janusz Radziwiłł and Bogusław Radziwiłł. However, afterwards he rebelled with his troops and joined the Polish forces fighting the Swedes.
With his forces he took part in the Battle of Warsaw of 1656. After the Polish defeat, he crossed the Swedish lines and operated with his forces behind the enemy lines in Prussia and northern Masovia. He took part in the victorious battles of Prostki, (where he defeated Prince Bogusław Radziwiłł), and Filipów. After the Swedish defeat in Poland and Denmark, Gosiewski was one of the people behind preparation of the Welawa-Bydgoszcz Treaty.
After Muscovy declared war on Poland, Gosiewski moved his forces to the area of the Grand Duchy of Lithuania, where he fought with distinction. However, in 1658 after the defeat in the Battle of Werki he was captured by the Muscovite forces and remained in their captivity until 1662.
He reassumed his earlier posts and became one of the supporters of the Polish king John II Casimir. He followed the policy of support for strong and centralized royal power, known as Vivente rege. In 1662 he was taken by the anti-royal Lithuanian confederates and shot to death on November 29 of that year.
He left a daughter, Teresa.
Posted by Painted Soldier at 10:23 2 comments: 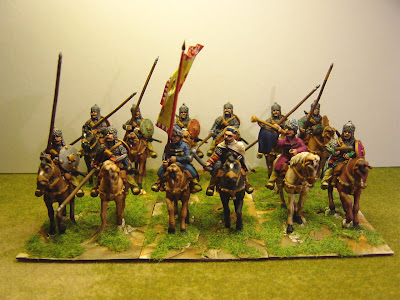 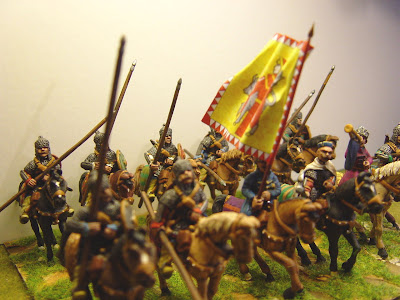 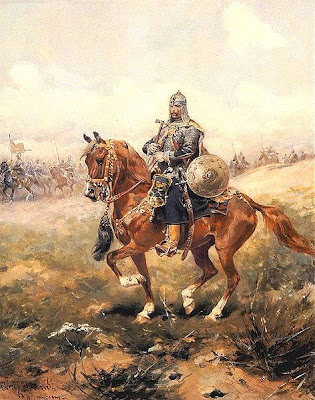 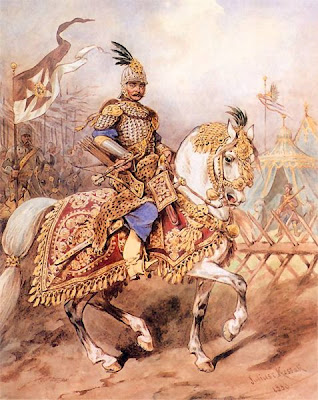 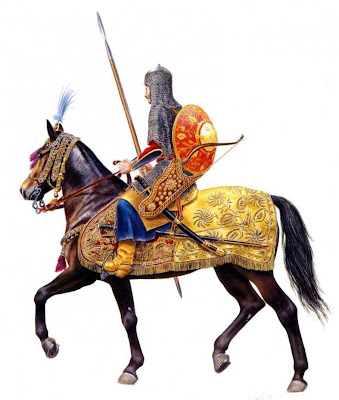 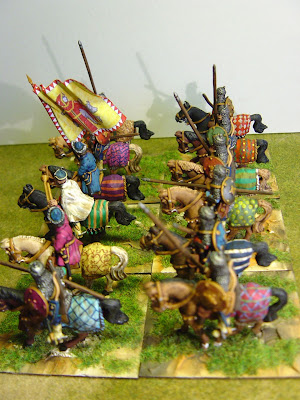 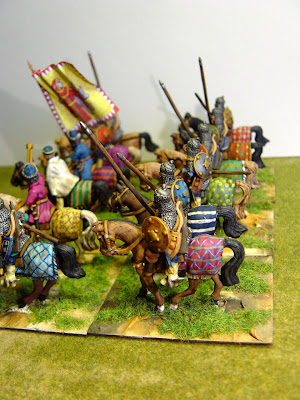 These Polish pancerni from TAG have taken me ages to paint. From the front they look nothing special but when you see the bottom two pictures you will see that the rumps of the horses are all covered in a rich panoply which was highly decorated. These are very nice figures but TAG has gone a little over the top in equipping them. They are armed with a) lance b) shield c) two pistols d) bow and arrows e) carbine f) sword so getting their horses to get up to a gallop might be a bit of an issue. Also the standard bearer is a conversion of a drummer who is, oddly, supplied without a drum (he just carries two drumsticks!).

I really should be back on the ACW by now but I have one more small addition to this Polish army to complete in the next couple of days. I'll post that by the weekend.

On an aside, I always find January a highly productive month for painting - grey nights and cold weather spurs me to my painting table.
Posted by Painted Soldier at 13:47 7 comments: