WAS in Italy (7): Piedmontese Fusiliers Regiment 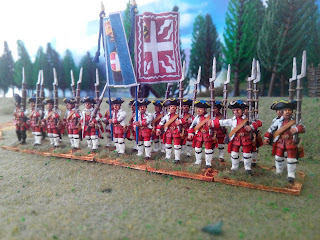 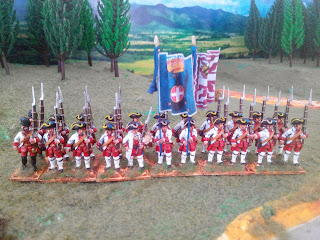 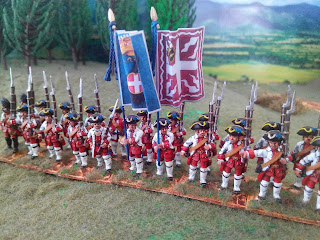 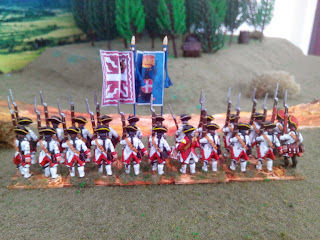 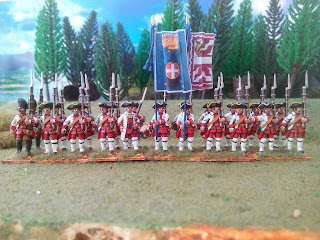 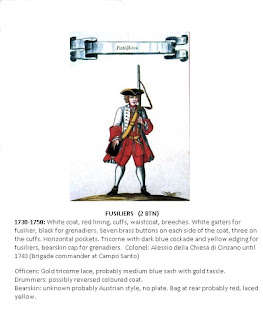 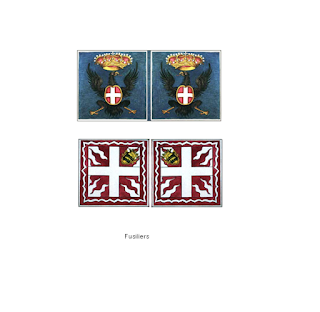 This comes from a heavily edited article by J. Cerino Badone

“In 1690 Duke Victor Amadeus II gave an order to the Count du Trinitè to raise a new regiment of national ordinance with the name of Regiment of Fusilliers du S.A.R. It was originally organized with 16 companies; one of these being a company of grenadiers. The new unit’s job was to escort and to support the artillery on the battlefield. In 1694 the regiment consisted of two battalions, but was reduced to one in 1696. By 1710 it had reverted to two battalions.

Service during the Polish Succession War

The Fusilliers first saw action in 1733 at the siege of Gera-Pizzighettone. In the spring of 1734 they were present at the battle of Parma. They were then present at the battle of Guastalla. In 1735 the unit was campaigning in the east of Lombardy and in September it was present on the west side of lake Garda supporting French action on the opposite side.

Service during the Austrian Succession War

In 1742the Fusilliers were campaigning in the north-east of Italy on the Po plains. In September the regiment was recalled to the Alps; and, from the camp at the Mont Cenis gap in Susa Valley, the Regiment saw action in Savoy during the counter-offensive against the invading Spanish army. By January 1743, they were back in Piedmont. After the debacle in Savoy, the operational theatre for the Fusilliers switched to the Varaita valley where the main French-Spanish army had chosen to invade Piedmont. The 1st battalion fought at the battle of Casteldelfino (8 October 1743). The follow year the whole regiment was present at the hard combat around the entrenched camp of Villafranca (20-21April 1744). During the defence of Collet du Villefrenche, the Regiment was surrounded with othes units and was compelled to surrender with two batteries of artillery. One assumes that they were largely paroled or there was a prisoner swop as the Regiment was again back in action during the summer months in the struggle in the Alps. The 1st battalion defended the walls of Cuneo during the French-Spanish siege (12 September- 22 October 1744) while the 2nd battalion was at the battle Madonna dell'Olmo (30 September 1744) where it was situated on the right wing of the, first line. In 1746 the Fusilliers was one of the units employed in Baron Leutrum's counter offensive and the regiment saw action under the walls of the city of Valenza (17 April-3 May 1746). Then the two battalions fought in the south-west in the Mediterranean theatre and the 2nd battalion fought at the siege of the Fort of S. Paul in Veintemille (5-23 October 1745). The 1st battalion of the Regiment was employed in the winter offensive in Provence (30 November 1745-3 February 1746). Reunited, the regiment fought until the end of the war in the Mediterranean theatre.”

Commanders of the Regiment of Fusiliers under Charles Emmanuel III

The figures are all from Crusader, as discussed before, and come from their Russian SYW range except for the grenadiers which come from the Austrian range.

Posted by Painted Soldier at 03:14