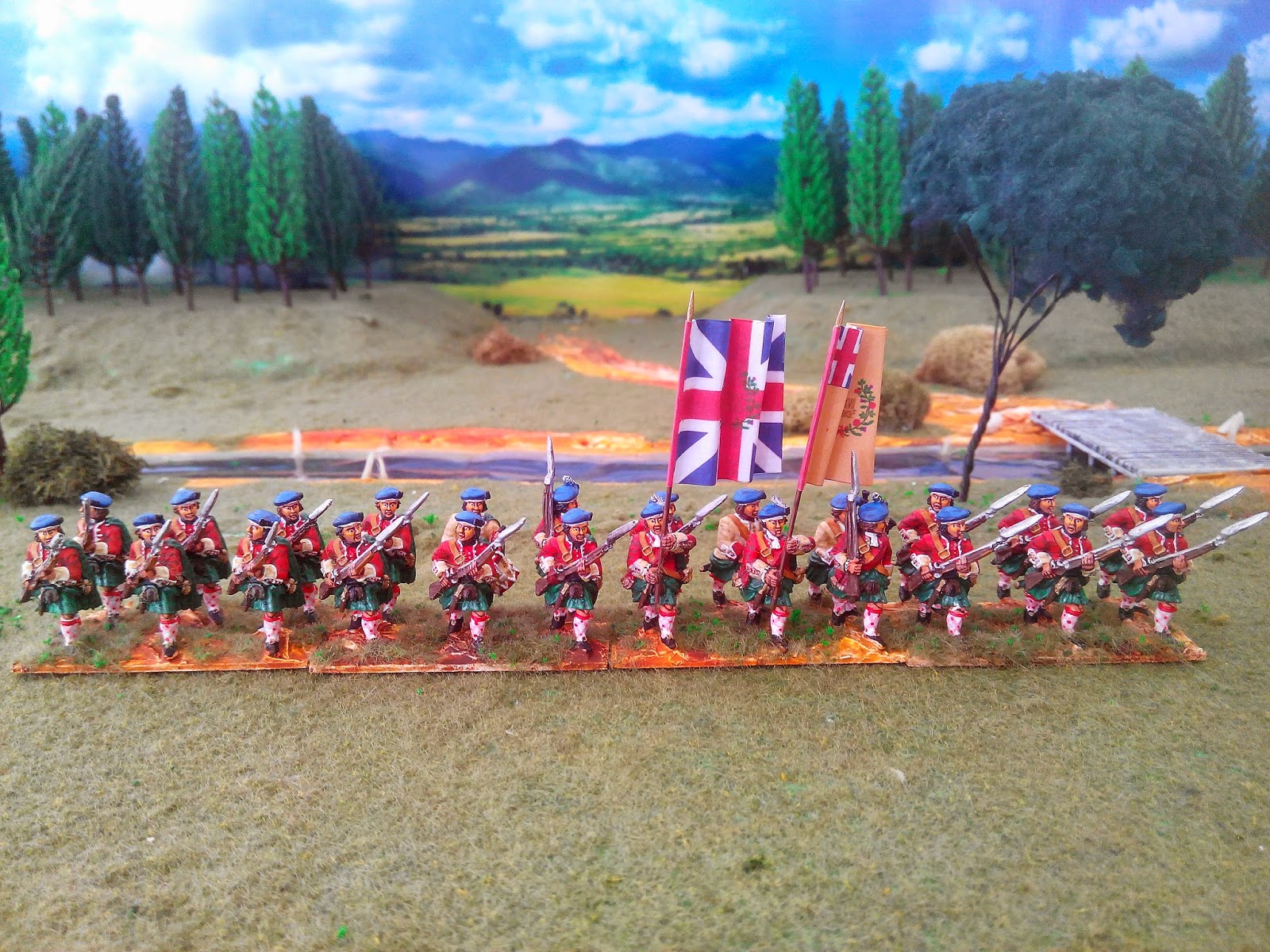 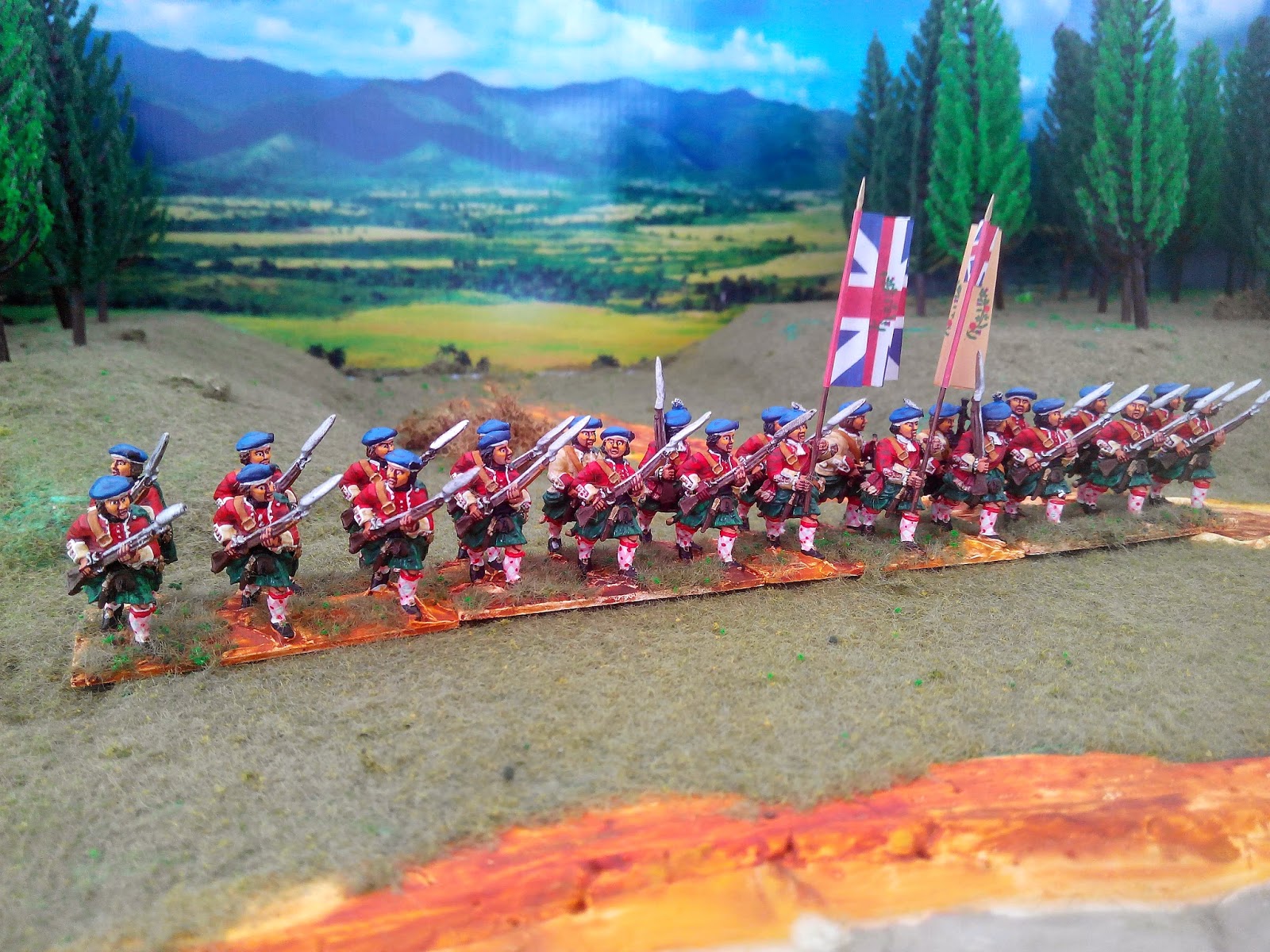 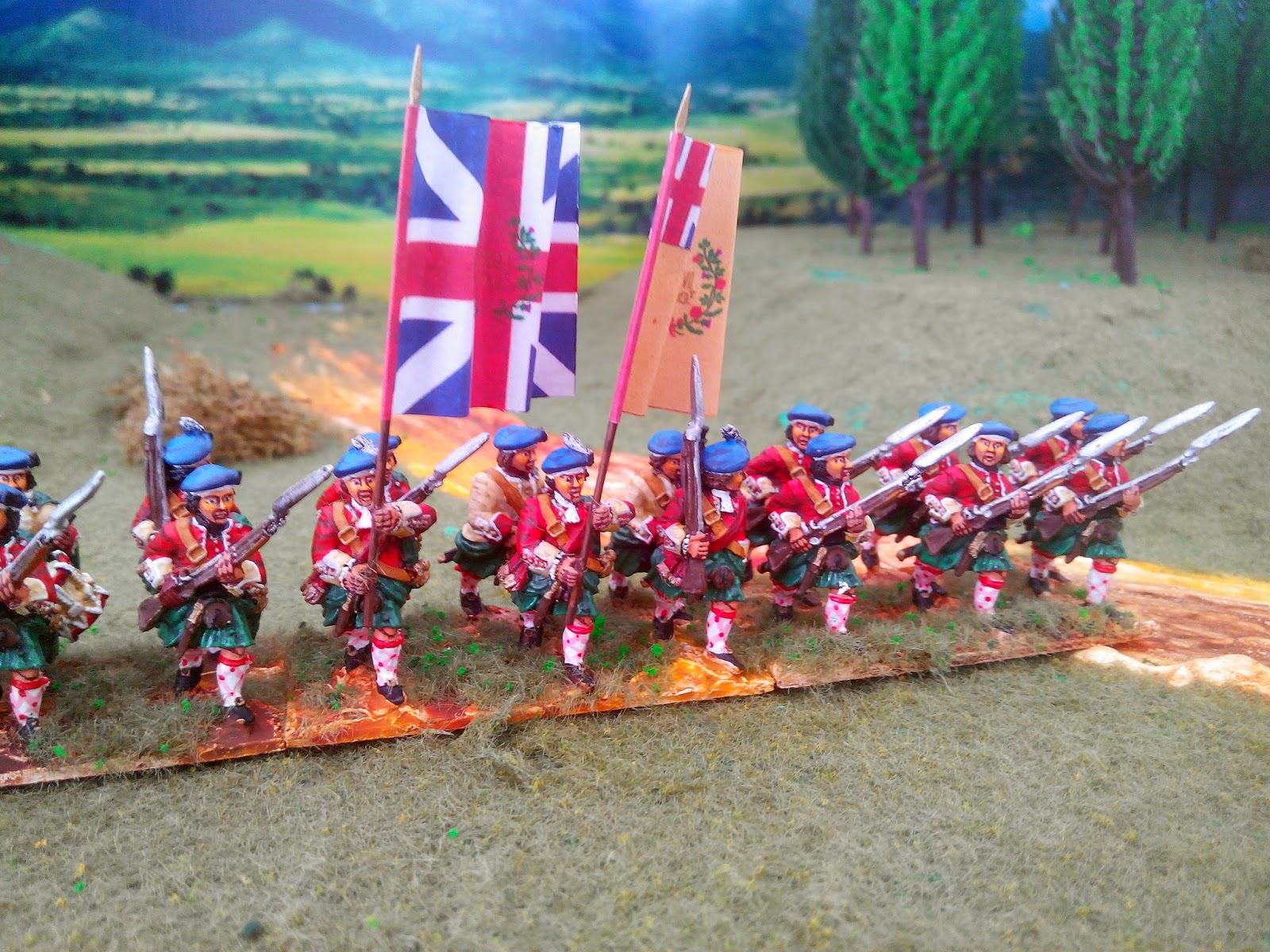 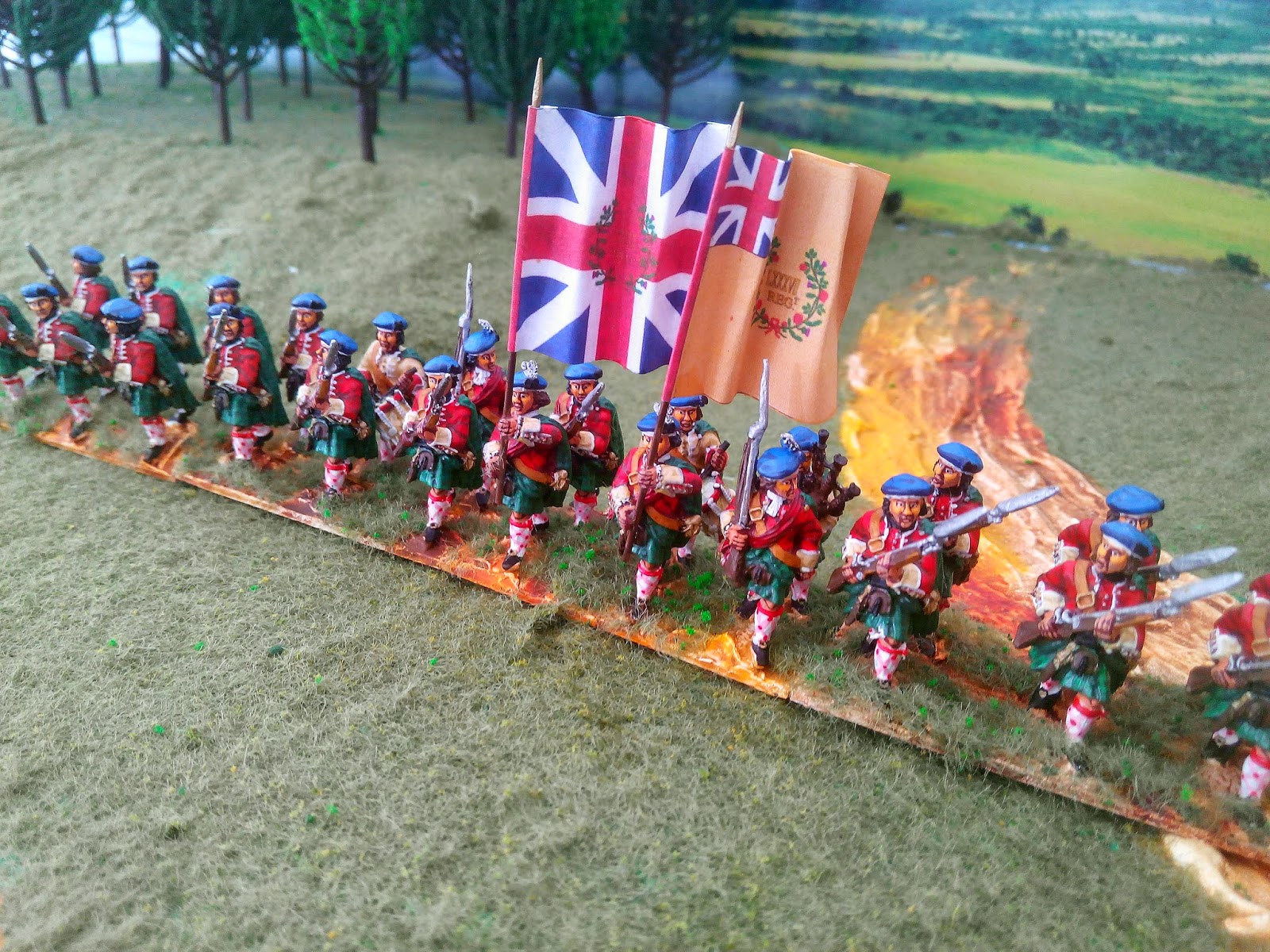 Today I'm showing you the 87th Highlanders and tomorrow I'll post the 88th. There is some dispute about the facing colours for both these regiments - buff or green - but as Kronoskaf shows a buff flag for the 87th I'll go with buff facings. The figures are from Front Rank and are very nice - there are even some head variations which is quite rare for this company. The basing is such that this regiment can be in open or close order as befitting this versatile light infantry unit. The following details are from Kronoskaf.

The regiment was raised at Perth on August 25 1759 from a nucleus draft of 315 men from the 42nd Highlanders by Lieutenant-colonel Robert Murray Keith. Major Keith was a relation of the celebrated field-marshall Keith of the Prussian Army. He had served in the Scotch Brigade in Holland before being appointed to the command of the regiment. Usually known as Keith's Highlanders, the regiment was also designated as the 87th Highland Volunteers.

The nucleus of 315 men were formed into three companies were led by Captain Archibald Campbell, Captain Alexander Mclean and Captain-lieutenant James Fraser. They were sent to Germany by late 1759 after the battle of Minden.

In 1760, Ferdinand of Brunswick was so pleased by these Highlanders that he requested to complete the initial detachment to a full regiment. Accordingly, 5 additional companies were raised at Perth and shipped to Germany to join the 3 former companies.

Highland units were used as a light troops or raiders. The men received little formal training other than to advance with the bayonet. The soldier's backgrounds, extensive cattle raiding in the Highlands, made them well suited to their role in Germany. The unit was often combined with the 88th Campbell or Highland Volunteers and both were heavily engaged in 'petite guerre' operations gaining a fearsome reputation.

In 1763, the unit was shipped, via the Netherlands, home. It landed at Tilbury Fort and marched to Scotland. As was common with the light units of the period after wars end, it was disbanded at Perth in July.

In November 1759, the three first companies were shipped over to Emden in Germany as the Highland Volunteers and joined the Allied army under Ferdinand of Brunswick at Krondorf on November 14 1759.

On January 7 1760, in support of the attack on Dillenburg, the 3 coys of Highlanders, with the support of the Luckner's Hussars, attacked the village of Eybach. There, they routed Beaufremont Dragons. The Highlanders had 4 men killed and 7 wounded while capturing 80 men and 120 horses. The opening actions at Viesebeck saw a company of the 87th being captured. On July 31, the battalion took part in the battle of Warburg but was not involved in heavy fighting. On September 5, 150 highlanders took part in a successful raid on a French outpost at Zierenberg. They led the assault on the town and surprised the French stationed there. The losses of the Highlanders in this affair were 3 privates killed and 6 wounded. In October, they were sent to reinforce the Hereditary Prince of Brunswick who was besieging Wesel. On October 14, they made a junction with the Prince's army. On October 16, at the battle of Clostercamp, 100 men of the regiment, along with British grenadiers, tried to seize the convent held by the Chasseurs de Fischer. The Allied detachment was quickly routed and badly knocked about. However, in the ensuing battle, the Highlander corps was the last Allied unit to retreat. In this action lieutenants William Ogilvie and Alexander Macleod of the Highlanders, 4 sergeants, and 37 rank and file were killed, and Captain Archibald Campbell of Achallader, lieutenants Gordon Clunes, Archibald Stewart, Angus Mackintosh of Killachy, and Walter Barland, and 10 rank and file were wounded.

On July 15 1761, the regiment took part in the battle of Vellinghausen where it was heavily engaged during the evening. Initially driven back, they recovered, counter-attacked and stabilized their position until morning. The next day, they and the rest of Granby's infantry were ordered forward when another French assault fell into confusion. In the action, the Highlanders corps succeeded in cutting off and capturing Rougé Infanterie but suffered fairly heavy losses. Major Archibald Campbell, Lieutenant James Grant, Lieutenant Angus Mackintosh and Lieutenant William Ross together with a sergeant and 31 men were killed. As for the wounded, they included Captain James Fraser and Lieutenant Archibald McArthur, two sergeants and 70 men. The commander in chief, in a general order, thus expressed his approbation of the conduct of the corps in this action:"His serene highness, duke Ferdinand of Brunswick, had been graciously pleased to order colonel Beckwith to signify to the brigade he has the honour to command his entire approbation of their conduct on the 15th and 16th of July. The soldier-like perseverance of the Highland regiments in resisting and repulsing the repeated attacks of the chosen troops of France, has deservedly gained them the highest honour. The ardour and activity with which the grenadiers pushed and pursued the enemy, and the trophies they have taken, justly entitle them to the highest encomiums. The intrepidity of the little band of Highlanders merits the greatest praise".

On June 24 1762, the regiment took part in the battle of Wilhelmstal where it was lightly engaged with 9 killed, 10 wounded and 15 missing. On September 21, it was at the combat of Amöneburg (aka Brücker-Mühle). In this action, the two Highlanders regiments had Major Alexander Maclean and 21 rank and file killed, and Captain Patrick Campbell, Lieutenant Walter Barland, 3 sergeants, and 58 rank and file wounded.
Posted by Painted Soldier at 04:13