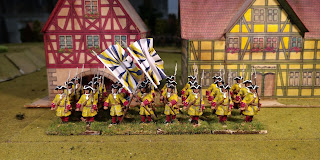 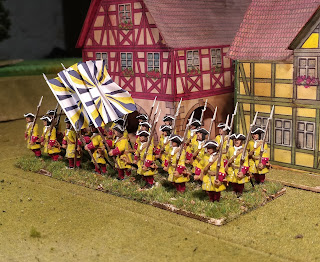 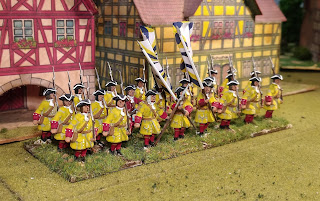 This is a slightly controversial unit as the yellow coats may have disappeared by the WSS although they were used at the end of the 17th century.

This regiment was raised in 1672 under the name of Pfyffer (or Pfiffer) and in 1689 it became Hessy. The regimental history then progressed right through to the revolution under different names – in the WAS it was Vigier and in the SYW it was Castellas. The yellow coat colour changed at some point( possibly in 1720, possibly earlier) to the more well-known red with blue facings or if you think Bacchus is reliable, then it's painting guide show this regiment as having blue coats faced red. The Ordonnance flags had various yellow-blue combinations that changed each time the proprietor changed but in 1753 the scheme changed to red-blue flames.

I have no idea the colour scheme for the drummers but they certainly did not use Royal Livery so the drummers wore what the colonel/proprietor wanted and reversed colours were the convention in this period.

This 3 battalion regiment would make a splendid brigade. In the WSS it fought in Flanders in 1704 and for the rest of the war it was in Spain. Hessy himself died in 1729 having reached the rank of maréchal de camp in 1702 and lieutenant général in 1704. There is no reason why you could not have him present in person commanding his brigade! I have painted the second battalion.

Posted by Painted Soldier at 10:38