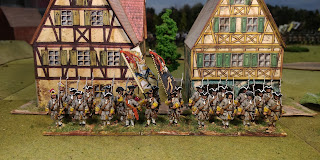 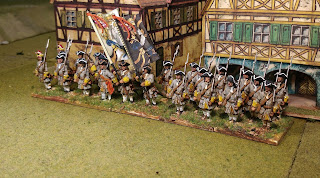 This Dutch regiment has rather pretty flags and yellow facings, so what's not to like. I have decided to give the Dutch a slightly darker grey than the Danes just for the sake of variety.

The flags come from Flags of War and, to quite a large extent, my choice of regiments to paint has been determined by the glory of their flags as well as the options for uniform sources on-line. The grenadier headgear is entirely speculative and I probably should have split the company into two with a grenadier figures at each end. The drummer too is a complete speculation.

Posted by Painted Soldier at 14:17