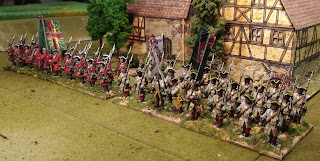 I bought some boxes of WSS plastics from Warlord Games recently and they are lovely figures, very easy to assemble. I cannot say for sure that this is the start of another project but I can say that I will paint up 4 British/Allied battalions and 4 French/Bavarian battalions to start off with and then take it from there – keep or sell depending on how I feel later.

But, so far, they are lovely to paint and here is (on the left) Catherine of Braganza's regiment (she was married to King Charles II) and after his death she became the Queen Dowager, an unusual position in British history. The regiment has startling sea-green facings and part of the joy of the WSS is that uniform details are very hazy at best so you can, within certain limits, do, more-or-less, what you want. Plus the flags are dazzling too!

These deploy in 3 ranks with my 3 rank/Platoon Firing basing, which shows them 'Locked-Up'.

On the right is the Danish Regiment Fynske (1st BTN of three, the first served in Flanders with Marlborough while the other two served with the Imperialists). These (plus the Prussians) produce a slight basing dilema as they were either in 3 ranks PF or 4 ranks PF. Sources differ so I have based them flexibly to be able to do either. When gaming flexibility is not required (ie because they always deployed in 4 or 5 ranks, like the French or Imperialists) the pairs of figures at the back of the line will be glued to the fours in front.

I have gone here for a lighter shade of grey than that I plan to use for the Dutch. I chose this regiment because I read that it had green trousers and gaiters, which later changed to red, so it is rather fetching to my eye. The grenadier headgear is entirely speculative.

Posted by Painted Soldier at 15:53