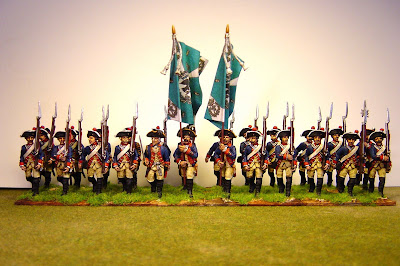 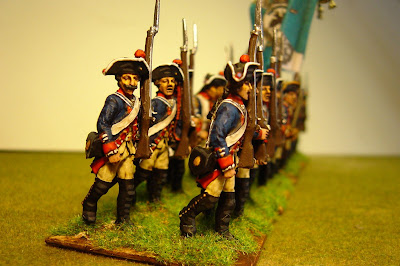 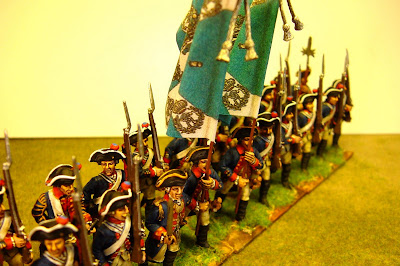 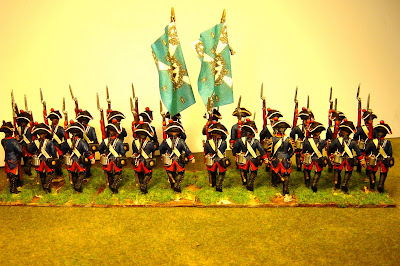 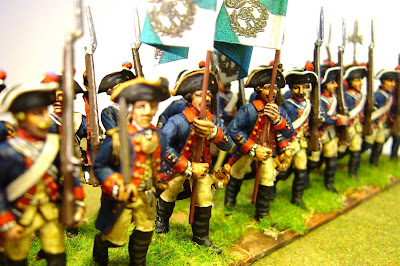 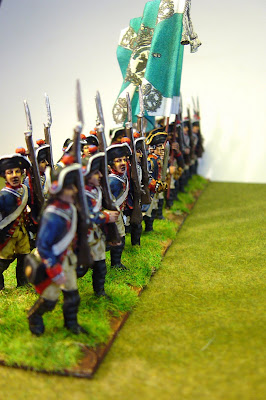 These are Trident’s 40mm Hessians from their AWI range but perfectly suited for the WAS/SYW. They are not easy to paint as the detail is so crisp that there are no areas to fudge. But, nonetheless, I absolutely love them. They are slightly thinner and taller than the heftier Sash and Saber 40mm SYW figures but I think they will do fine.

Having sold most of the 40mm I’ve now decided to restart this project and I will use these Trident figures for the Prussians while continuing to use S & S for the Austrians.

The drummer comes with a separate drum and hands. Next time I’ll paint the figures first and then add the drum and hands as getting a brush into those nooks and crannies is not easy. The standard bearer figure doubles as an NCO and comes with a spontoon if you wish to use it. Again the hands are separate. The officer has a separate right hand. All the remaining figures are one-piece castings with three basic poses of the arms and numerous head variations in each body pose.

I think these are quite possibly the finest wargames figures I have ever had the pleasure to paint - and that is saying a lot as I have painted figures from most manufacturer’s ranges. The only caveat is that they are not easy to paint. They are intolerant of sloppy painting so took me a great deal of time. Army Painter has been used again, but in a minimalist way only on straps and small clothes. I am content with the result and will soon start on the second battalion of this regiment, one of my favourites, Number 12.
Posted by Painted Soldier at 13:55