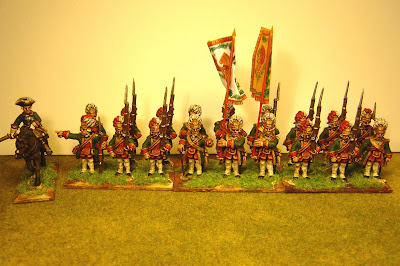 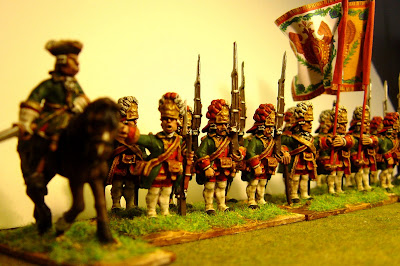 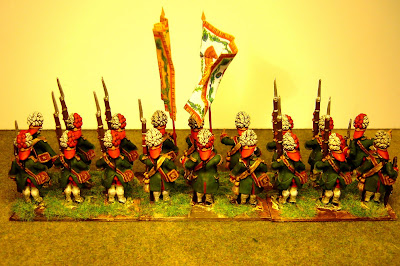 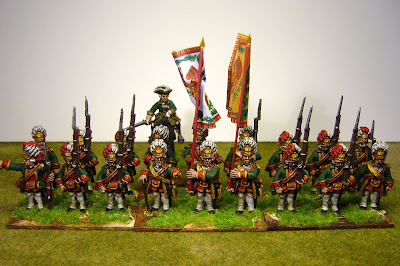 Have you every seen a more ostentatious uniform before? Well my guess would be that the Empress Elizabeth, no slouch herself when it came to outrageous dress, had this uniform designed by a theatrical costumier.

Kronoskaf say that “In 1742, Elizabeth Petrovna created the Leibkompanie from the grenadiers of the regiment in recognition of the help that this unit had given her when she had walked upon the Palais d'hiver.” I think that is a reference to seizing power by marching on the Winter Palace. They did not last long though as Peter III disbanded them in 1762.

These are Foundry figures by our friend ‘sausage-fingers’ and they are rather splendid. Their hats are covered in ostrich feathers – all-white for officers and red-white for rank and file. NCOs had white feathers with a red stripe down the centre and drummers the reverse feather colour. I would imagine that they would have preferred to stay indoors as ostrich feather look rather sad when wet! Of course this unit did not serve at the front in the SYW but guarded the Empress in St.Petersburg and Tsarskoe Selo. They were a highly priviledged elite. Ordinary grenadiers had the rank and pay of a Lieutenant in the army and a Lieutenant ranked as a senior general.

I think I have made a couple of errors when I painted these – drummers should have been in reversed colours and the helmet itself might have had a black background to the Imperial eagle plate on the front. I have Pengel and Hurt but they don’t always present the information in a clear and legible manner. I wish someone would produce a decent guide for Russian uniforms of the SYW! Oh, and I have used ArmyPainter on these but in a very minimalist manner.

These don’t fit in my current armies so I will be selling them on eBay on Sunday. If you would be interested in buying them, please contact me or just bid. Ebay item number 110605560463.
Posted by Painted Soldier at 09:45