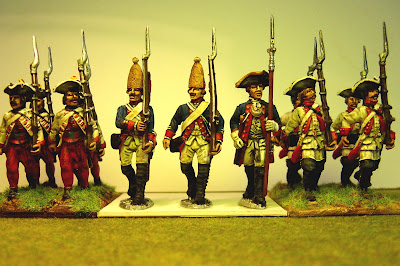 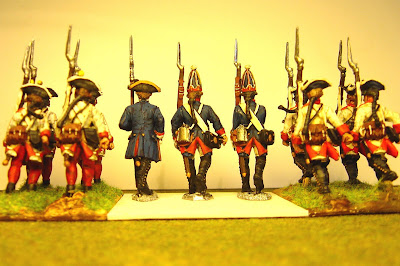 I'm here asking opinions. The pictures show the new 40mm AWI range from Trident - in particular, the Hessians that are suitable to use as SYW Prussians. In the centre are three Trident figures framed on either side by Sash and Saber 40mm. On the left are Hungarians and on the right are Austrians.

The question is one of size compatability. It's not a proper comparison as the grenadier mitre in the centre is so tall and a better comparison would have been against Austrians in their bearskins but I don't have any so this comparison will have to do.

The Trident figures are certainly thinner. They are also more expensive. But, do you think the look okay together or not? If I used them at all, then all the Prussians would be from the same manufacturer. Answers on a postcard please!

(On the subject of painting these figures, I've used ArmyPainter but only on areas of white and the faces. I like the results although there are inaccuracies in the figures; no shoulder-straps and I don't think that officers carried a cane attached in this way to their lapels. I think that was a method used exclusively by NCOs.)
Posted by Painted Soldier at 16:16