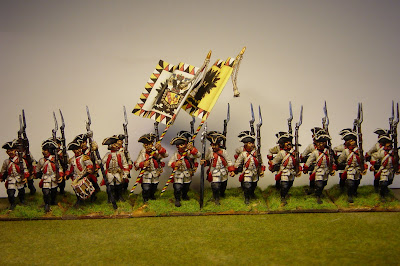 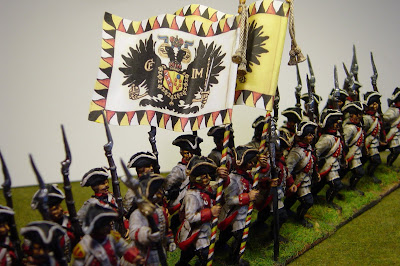 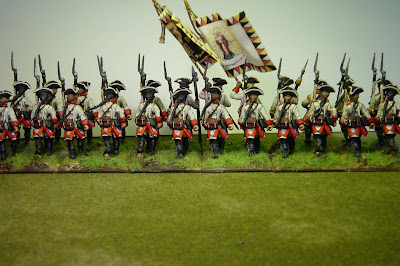 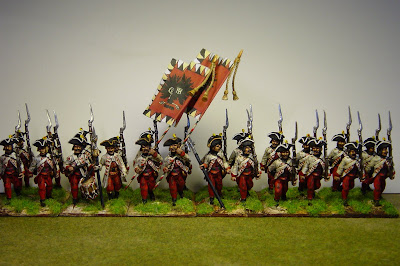 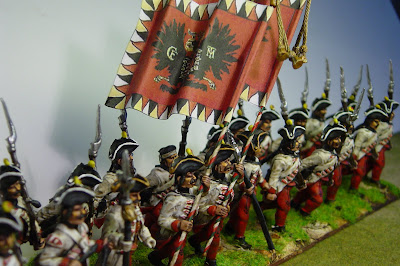 A few months ago I sold all my 40mm Prussians and most of my Austrians. But inspiration has returned as I have been recently editing the old Greenwood & Ball Seven Years War Uniform guides for both the Prussians and the Austrians. New versions of these terrific guides will be released before Christmas by 18th Century Press, my printing company (see the Savory link on the right), and I’ll update you here on my blog with more news soon. The Austrian booklet will cover both the WAS as well as the SYW.

It was the re-writing of the Austrian booklet, with my last blog entry, plus the further correspondence with Christian Rogge on the subject of Infantry flags, that has inspired me to look again at this project. I found the late SYW uniform rather boring and I’ve decided to build a small Austrian WAS army - WAS to early SYW to be precise.

I had one battalion of IR18 Marschall unsold from the ‘old’ project so I have given them red turn-backs as used earlier on. The Hungarian battalion is new and this is the second battalion of IR37 Esterhazy, one of six new Hungarian regiments raised in the WAS.They are carrying the red flags that were issued to these new regiments which will be explained and illustrated in the Austrian booklet. Plus we will be debunking the notion that the so-called green Hungarian flag was issued to Hungarian regiments.

I would have started Austrian and Prussian armies in 25mm if I had liked the figures that manufacturers make for the former – but I don’t sadly and these 40mm from Sash and Saber are deliciously chunky and fun to paint. Plus Chris ‘promises’ that there will be dragoons soon……….

I will put the article on Austrian flags on my blog but not until the end of the year and after the booklets have been published. I hope you understand the reasons why.
Posted by Painted Soldier at 16:52