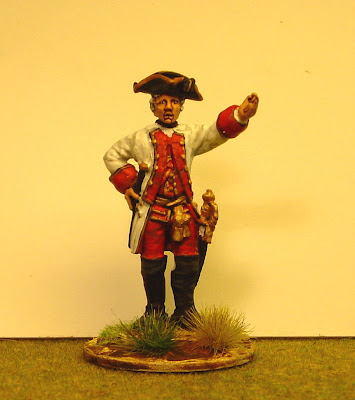 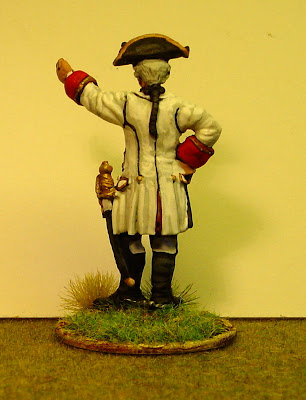 I thought it was time to paint an Austrian Brigade General in 40mm but nobody makes them for the SYW.

So I looked for a Trident Hessian to convert and my main criteria was that there should be no gorget as this would be difficult to cut away from any metal figure. Voila, this gentleman appeared and he looked like a suitable candidate.

The model came with a bare head and a separate tricorne which, I suppose, was to be placed somehow in his outstretched hand. But the hand position looked wrong and I could not see any way of putting a tricorne into his hand. So I filed his head down and glued his hat to his head in a somewhat rakish angle. Then I had to cut away the cord that held the cane to his coat lapel (this is an error on the designer’s part as I am sure that officers in the Hessian army of the AWI – that is the period the range is designed for – did not have a cane suspended from their lapels). NCOs did though. But Austrian officers carried a black cane so it is now just being held in his hand. Then he needed fuller cuffs so I used greenstuff to fill them out.

Then it was just a question of painting him. I think it’s a splendid uniform. He is a tad taller than the men in his brigade (Sash and Saber) but, hey, maybe he is a giant amongst men.

When Chris at S&S sends me some more figures I’ll be able to finish off Kottendorf’s Infantry brigade and maybe complete a Dragoon regiment.