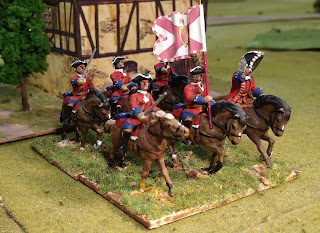 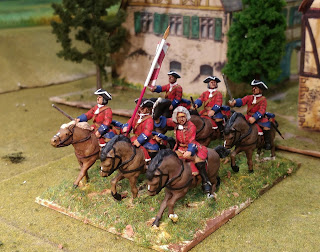 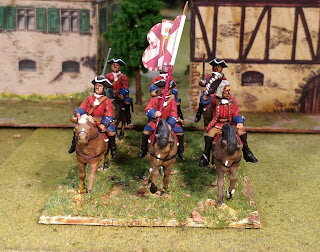 Here I am using Warlord Games plastic WSS cavalry for the first time. They are quite fiddly to assemble and the horse's heads are horrible, but when finished they don't look that bad plus, and this is important to me, they are quick to paint. The officer has actually come from the Artillery box and should represent a general of sorts but I have just made him the dragoon officer. My 'real' general figures will probably come from Ebor. Note British cavalry deploy in 2 ranks which accounts for the wide bases.

He was the second son of George Ross, 11th Lord Ross. When Wynne's Regiment of Dragoons was raised in 1689, Ross joined as a captain, and served with the regiment in the Williamite War in Ireland. He went to Flanders with the regiment as lieutenant-colonel in 1694, and was appointed colonel of the regiment on Wynne's death, 15 July 1695. In 1704 he secured the title of the Royal Dragoons of Ireland for his regiment. Ross was promoted brigadier-general on 9 March 1702, and major-general on 1 January. He commanded a brigade of Dragoons at the battles of Blenheim, Ramillies, Oudenarde and Malplaquet. He was further promoted to lieutenant-general on 1 January 1707, made Colonel-General of all the Dragoons on 1 May 1711, and promoted to full general on 1 January 1712. He was removed from the colonelcy of the Royal Dragoons of Ireland on 8 October 1715, but reappointed on 1 February 1729, holding the post until his death.

Posted by Painted Soldier at 20:55