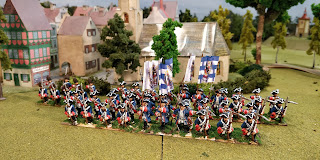 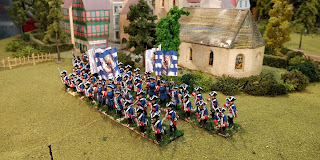 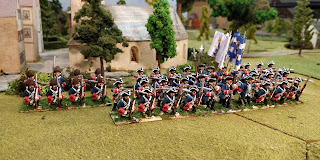 These two units mean that I have reached the end of the Kreis infantry. These two battalions were actually two one-battalion regiments called Kurköln Leibregiment and Kurköln Wildenstein, with a grenadier company for each. Their uniforms appear to have been the same except that the former had silver buttons and the later brass. Both seem to have had the same flags too. Their uniforms were Austrian in cut but in Prussian blue.

The figures are from Front Rank and I have never painted kneeling/firing Austrians so these figures are a first for me and are rather nice.

Posted by Painted Soldier at 11:34