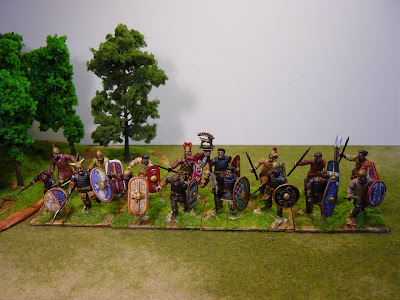 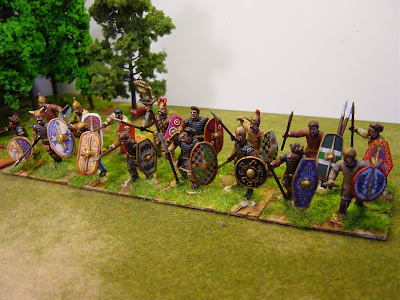 Gaius Julius Caesar’s description of the soldurii is as follows: “And while the attention of our men is engaged in that matter [the attack on the Oppidum of the Sotiates], in another part Adcantuannus, who held the chief command, with 600 devoted followers whom they call soldurii (the conditions of whose association are these, - that they enjoy all the conveniences of life with those to whose friendship they have devoted themselves: if any thing calamitous happen to them, either they endure the same destiny together with them, or commit suicide: nor hitherto, in the, memory of men, has there been found any one who, upon his being slain to whose friendship he had devoted himself, refused to die); Adcantuannus, [I say] endeavoring to make a sally with these, when our soldiers had rushed together to arms, upon a shout being raised at that part of the fortification, and a fierce battle had been fought there, was driven back into the town, yet he obtained from Crassus [the indulgence] that he should enjoy the same terms of surrender [as the other inhabitants]. “

When I placed my last order with Wargames Factory (great service, by the way!) they sent me some freebies – enough to make 16 Saxons and, not really needing to start another period, I put them aside to use as Gauls. Seems unlikely, I hear you say, as they are separated by about 1000 years of history but you judge for yourself. Given Gallic heads and shields, I reckon they look okay. These then will be Adcantuannus’s personal bodyguard and it will be interesting to see how many fulfill their contractual obligations to their boss!

On the subject of my Gallic army, I have been giving thought to variable move distances for warbands. The main strength of such an army, against the Romans for example, seems to me their great speed over poor as well as good terrain. The rules I plan to use are another Computer set “Macedon, Rome and Hellas” by Computer Strategies, and I’m fairly familiar with them having used them ten years ago. The move distances in the accompanying booklet state that HI and MI move 150 paces and Open MI/HI move 200 paces (I’m using the groundscale of 1 mm = 1 pace). I’m planning to rate all my warbands as Open MI and giving them one (d6) of extra variable compulsory movement with each pip giving an extra 10 paces. So their movement could be between 210 paces and 260 paces and this will mean that warbands will hit the Romans in an uncoordinated manner, which I think is fair.

The other thing I’d like to play around with is the ability of the Gallic C-in-C to hold back his warbands from instantly charging the enemy at sight. The better his skill, the more likely he could hold his forces back.

These ideas will need playing out on the table. Any thoughts most welcome.
Posted by Painted Soldier at 13:45