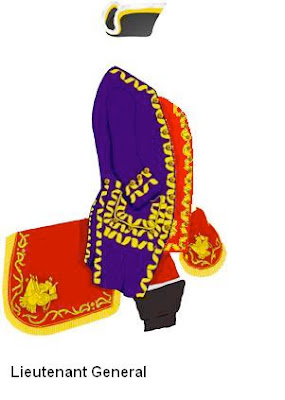 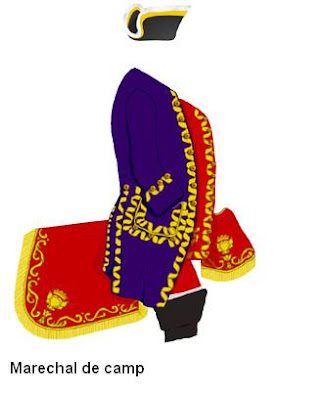 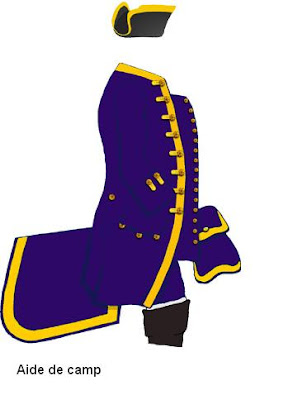 I've been trying to pin down exactly what French Generals wore during this period and whether Brigadiers had any formal uniform. Here is my translation of a Royal Order on the subject:

King’s Order
For regulating the uniforms of General Officers employed in the service of the armies of His Majesty.


His Majesty, considering the importance that all the General Officers employed in His armies, on any occasion, are promptly recognized by all those under their orders, judges it to be necessary to regulate a uniform clothing for them, which shows their character and recognizes the honours and the obedience which is owed to them. Consequently, His Majesty orders that the uniforms of His Lieutenant Generals and Maréchaux de camp, which they will wear in all campaigns, shall be a single-breasted coat, in a colour vulgarly called King’s Blue, trimmed with gold lace, in accordance with the sample which will remain annexed at the minute of this ordinance. The only difference between Lieutenant Generals and Maréchaux de camp will be that the former will have extra lace borders to the pockets and the sleeves while the latter will have the simple lace edging.

Mandated and ordered by His Majesty, His Generals are instructed to follow this order with due diligence and precision in conformity with His Majesty’s wishes.

Made at Versailles, 1st February 1744


Now, there may well have been further orders published after this date but the original came from Patrice Menguy's excellent website Les Sujets du Bien-Aime
(http://patricemenguy.free.fr/sujetsdubienaime/Sommaire.html)and if there are more (and later) orders he does not show them.

I have shown some of these plates before but wanted to note the following:

1) The uniform of Brigadier is not mentioned.
2) Further details are absent - nothing on the vest colour, trousers, saddle cloth or hat feathering.
3) Not every senior General chose to follow these orders (the French army was often very lax at following dictat from Versailles) and an obvious example was Soubise, who has been portrayed (in Mollo) wearing the red coat of the full dress of the Gensdarmes de La Garde du Roi, of which he was Capitaine-Lieutenant. He was also a Marshal of France so I suppose he could be excused.

I've also shown a useful illustration of an Aide de Camp but I cannot be sure if this was regulated or not.

*** We have met this individual, or rather his son, in one of my previous mini-biographies.
Posted by Painted Soldier at 09:50