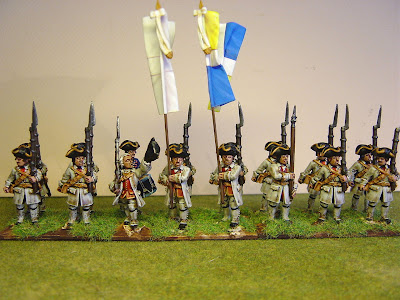 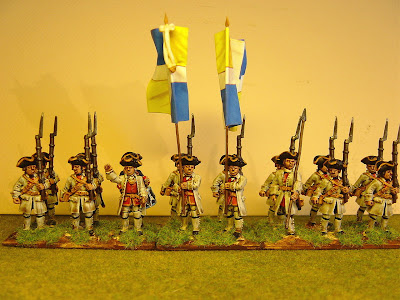 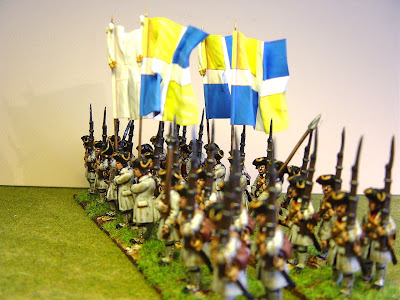 Another two battalion regiment to finish off second brigade of the first division. Actually the second battalion of this regiment served in Canada until 1758 when it returned to France (via an exchange at Calais as it had been captured by the British after the fortress of Louisbourg fell). On its original dispatch to Canada it had been issued with white vests (as opposed to the red the first battalion wore) and I have painted both battalions with the red vests as I’d like to think that almost the first thing the assembled (and complete) regiment would do would be to revert to its more colourful sartorial elegance.

This is a so-called white cuffed regiment. Most Infantry units in the French army had either red, blue or white cuffs (there were exceptions of course – black and violet were other options). Now given that the coat was a pearly-grey does this mean that the cuffs, in a white-cuffed regiment, were the coat colour or that a special issue of white materiel was made? This is a question that has intrigued me for years (yes, a brief glimpse into the mind of a minor fanatic) and Pengel & Hurt have the following to say:

“The regulations stated that the soldier was to be issued with ‘1 ¼ aunes (one aune = 1.19 metres) of Lodeve cloth and 1/8 aune of coloured cloth for the cuffs, 2 2/3 aunes of Aumale serge for the coat itself and the vest and trousers were either 2 2/3 of lace material or 3 ¾ aunes of woollen serge according to the custom of the regiment.”
Clear as mud then!

I have painted the cuffs in the same colour as the rest of the coat as I think this was the most likely.

Beautiful flags are by GB, of course. Figures are mostly Crusader (and I think they are exceptional) except for a Front Rank officer in the first battalion and a rather tall Capitulation sergeant in the second – the latter being a long lost remnant of another project who is happy to find service again.

The last thing to note are the finial cravat’s supplied by Nic at Eureka. These will replace the Front Rank ones which are, I think, a little ‘over the top’, although I’ll retain them for the Guard’s brigade. The new ones are much more discrete and look like scarves.

Soon I’ll show some pictures of some great French artillery pieces I have bought from Elite Miniatures, which are so nice that they have provoked a complete rethink of how I plan to model these in both my SYW armies. The old ones will go off to the canonnerie.
Posted by Painted Soldier at 09:43