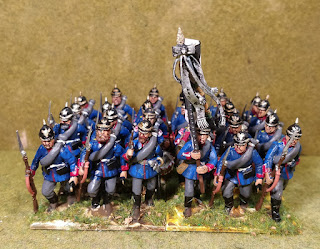 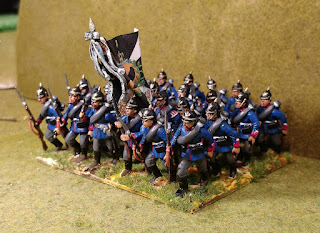 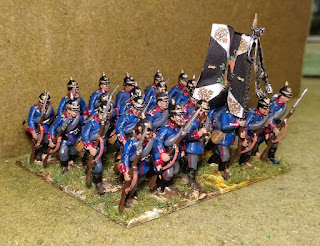 I bought a box out of curiosity as soon as they became available. I had started an 18mm FPW project that I soon abandoned as I like the 18mm scale but did not enjoy painting the figures – I have realized that as I grow older so the figures need to get larger to paint half decently.

These Perry figures are very nice indeed. Each box has 39 figures – one command sprue of 4 figures, two skirmisher sprues each of 6 figures (one of which is a dead chap) and 5 sprues of line figures (each of 5 figures). That adds up to 41 and I suppose that includes the 2 dead guys.

I have done 24 figures in this battalion and will add 6 figures of skirmishers. Effectively one will be able to throw forward one company of skirmishers out of four. Unused in the box remains another 6 skirmishers and a sprue of line. The formation in the pictures is in column which will be murdered by the French chassepot so it may be worth painting the second skirmisher company as well.

Whether I continue with these is unknown. I will certainly buy a French plastic box when it becomes available. I should also mention that the painting guide included in the box is a great help as are the two flag examples, one of which I have used here. Note the lovely black/silver pennants which were battle honours and were of greater status than the flags themselves.

Posted by Painted Soldier at 20:05