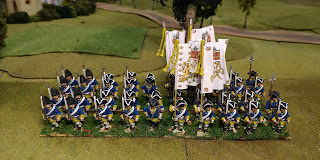 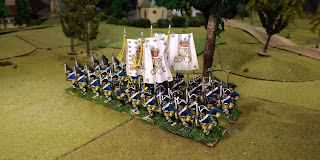 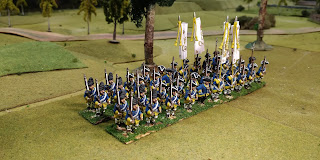 Using Front Ranks's figures, here are some Swedes, the first of twelve foot regiments planned. Each regiment will have two grenadier companies and these can be converged away into their own elite battalions. Although most of the regiments will be the expected blue-yellow colour scheme, I will also do a red and a white regiment. Regiments were largely selected for their flags.

These Front Rank figures do not come with a bayonet despite Kronoskaf saying “The bayonet was permanently fixed to the musket”. Of course these are a very old design, pre-dating the internet I suspect, so Alek probably did not have access to the latest information.

Posted by Painted Soldier at 17:09