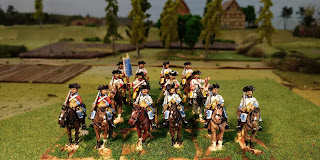 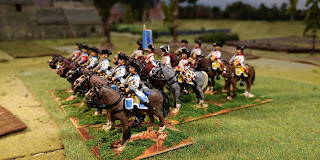 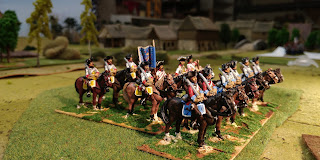 This is a very complicated unit of three squadrons.
The second and third squadrons were supplied by the Elector of Pfalz. They had white coats with red facings and the horses had yellow saddlecloths. If they wore a cuirasse at all it was hidden under the coat.

That make one three-squadron regiment with three uniforms. Soubise, who we have met before on sartorial matters, rated this unit as mediocre (it had heavy losses at Rossbach)
but that may just have been his dissapproval of the mismatched uniforms.

Posted by Painted Soldier at 15:43