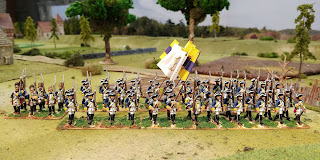 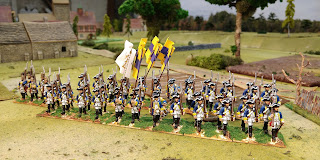 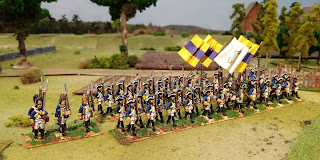 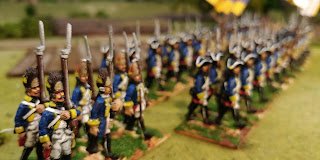 Here is the first of three Franconian Circle regiments. This regiment had two battalions and two grenadier companies and, unusually, each company of grenadiers had a different headgear. The first had the Austrian-style bearskin while the second had a Prussian-style mitre. This information comes from Kronoskaf and the button colour is suggested to be silver which is strange as the mitre and bearskin metalwork is brass.

There is also an interesting anecodote concerning the flags. “As per Roider, the colours depicted hereafter had been issued at the outbreak of the Seven Years' War. However, for religious reasons, they were never handed out to the regiments. In Germany it was customary that the colours were nailed to the staff with additional religious symbols. As the regiment comprised Protestants as well as Catholics there was a grave dispute between them. So the regiment retained its old colours for which, besides the fact that their distinctive colour was blue, we found no description. “ I think what the author is suggesting is that they could not agree on the details of the ceremony in which the flags were to be handed over to the battalions, but I might be wrong.

Posted by Painted Soldier at 13:36