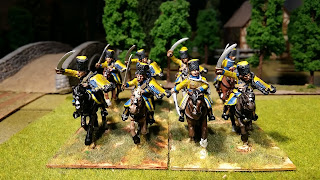 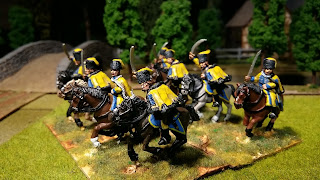 This description comes from Manley: “The armies of Spain had no permanently established light cavalry since the existance of the Hungarian hussar regiments of the Habsburg pretender Carlo III  fighting in the WSS (1700-1713). For the campaigns in Italy of the 1740s, an expedient first used in the War of the Polish Succession (1732-1738), was re-adopted. This was the recruiting of deserters and POWs from the enemys units of grenzers into squadrons of semi-regular hussars.

The Conde of Montemar raised the first company of such troops in Bologna in mid-1742 under the command of Captain Ladislas Harvor. Initially the unit served dismounted as the “Comania  franca de husares a pie”, indeed it was in action as such at Camp Santo. By 1744, “El Cuerpo de Husares” had reached a strength of two companies, both now mounted, and was serving with the army of Gages. Thereafter the Corps survived until the end of the wars, becoming an official ‘regiment’ before being disbabded, probably before the end of 1748.”

Interestingly, on the other side, the Austrian side, there was a  Feldmarschallieutenant  Baron Havor who was inhaber of the Havor Hussars which also participated in the Italian campaign. This is that regiment:

These Hussars, in Spanish service, wore this yellow-blue uniform. The Spanish seemed to like yellow as a coat colour (their dragoons mostly wore yellow too) and it is a striking look.
Posted by Painted Soldier at 16:14