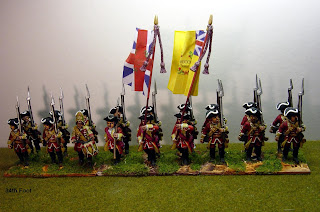 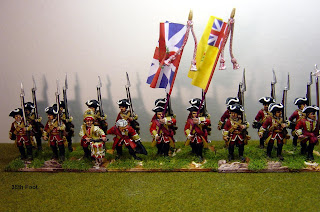 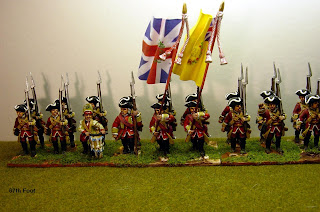 I should explain why I call this a SYW Pragmatic army for the term is actually very misleading. In the earlier WAS the British army deployed in Europe (with its German allies) was called the Pragmatic Army because it was there to support the Austrians and Maria Theresa's inheritance by virtue of the Pragmatic Sanction arranged by her father. In the period between the WAS and SYW there was a complete reversal of alliances (the French allied with their long term enemies the Habsburgs) and the British ceased their longtime alliance with those same Habsburgs and switched to support the Great Poacher, Frederick the Great of Prussia. So to call a British SYW army a 'Pragmatic' army would be totally the reverse of the truth and more accurately it might be called the 'anti-Pragmatic' army. In general terms, uniforms of the major combatants stayed largely the same for both wars so when I paint figures for this period I assume that they will be useable for both wars, hence the tag 'Pragmatic' is shorthand useage.
Posted by Painted Soldier at 10:23