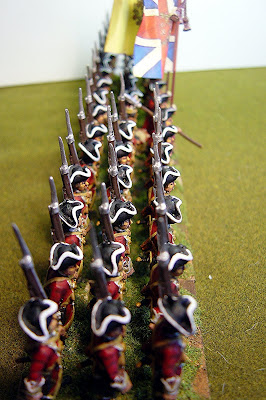 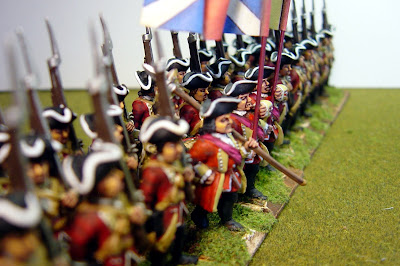 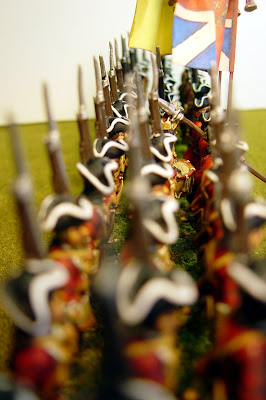 For a while now I have wanted to paint a large WAS/SYW unit in three ranks so here is a British battalion consisting of 45 figures (five bases of 9 figures). All the figures are by Crusader except for the three officers (one officer, two ensigns) who are by Front Rank from their Jacobite Rebellion range.
The basing is for Carnage and Glory II (groundscale 1mm=1pace) so the unit is 10 inches wide and shows a battalion of 723 men plus between 5 and 10% officers and ncos. I'll ask Nigel Marsh, the rules' creater, to let me reproduce his Groundscale chart so you can see how that calculation is made. One of the great thing about these computer-moderated rules is that one can solo-wargame.

Painting wise, I took special care with this unit giving the officers a different red to the rank and file. For the latter, I used Cote d'Arms 237 Russet Red over a base of 509 Brick Red. Finally I used Armypainter Soft Tone to give that campaign look.

I wanted the unit to be as compact as possible so the men are shoulder to shoulder and the three ranks are closely formed. I was hoping that showing that third rank would inspire me to consider this a new project (all my SYW 25mm having been sold) and I'm really tempted! Another project?
Also, I've been emailing Mark Sims at Crusader this week and there is good news as he is about to start work on extending his SYW range. I'm pretty sure we will see British and Russian Grenadiers and maybe Grenadiers de France. Possibly he will do some new artillery crews as well.
Lastly, if I continue this project I'm not sure when to set it - WAS (Fontenoy) or SYW (Minden). My knowledge of the British in this period could be written on a postage stamp (so no Greenwood and Ball on that subject for a while) but it would appear that the only difference I can see is in the colour of the gaiters - in the WAS all illustrations show them in white gaiters whilst in the SYW they are always shown in black. I don't think it matters either way!
Posted by Painted Soldier at 11:28