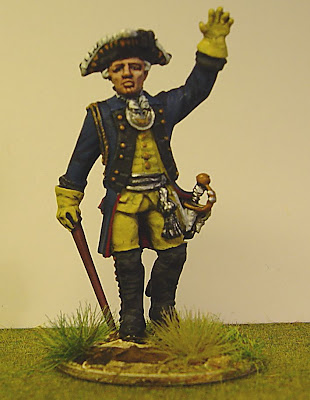 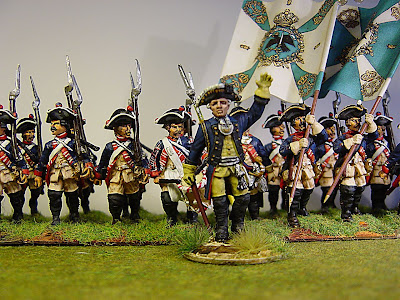 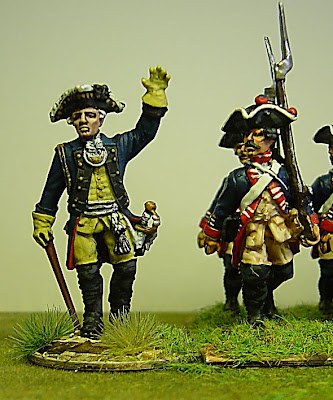 Hello blogites! Well, I’m not sure what followers or occasional readers of a blog might be called, but ‘blogites’ sounds kosher to me. As you blogites will know, I’m a great fan of bouncing all over the place in terms of what I’m painting at any given moment of time. So in that spirit, I’m giving you a fair range of things over the next few days. This post is about 40mm SYW and the next post, tomorrow, will be about 25mm Ancients in plastic. Following posts this year will be mostly ACW.

Firstly, a 40mm figure from Trident’s AWI range. He is meant to be Lt. Gen. Wilhelm Von Knyphausen, a Hessian general, but I have painted him as a Prussian brigade commander (at last! A Prussian general) GM Emanuel von Schöning , inhaber of IR46, for my SYW army.

Patience, I’m told, is a virtue. Well in that case I’m well on my way to beatification. I’m referring, of course, to this endless wait for Chris Hughes at Sash & Saber to fill out the 40mm SYW range. So when Matt Shaw offered to get hold of this new Hessian character from Trident’s excellent and ever expanding range of AWI, I jumped at the chance to see how he would fit in. The second picture shows him next to a battalion of S&S. Please send me more of these beautiful sculpts.

Size-wise he is a fair bit larger than the S & S figures but the Trident figure stands upright while the S & S figures mostly lean forward. For a General figure I don’t see the size difference as a problem but for whole units I need to get a sample soon of the rest of the Hessian range to see how they will fit in. Furthermore these Hessians will, I’m told, be wearing gaiters so they are interchangeable with Prussians from the SYW.