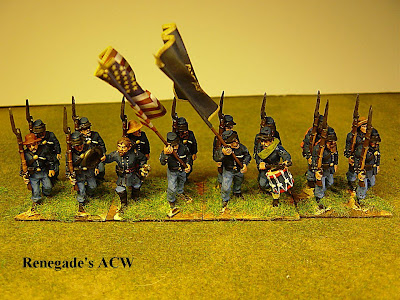 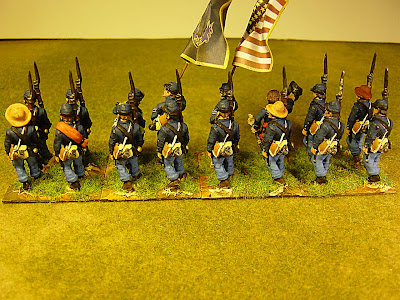 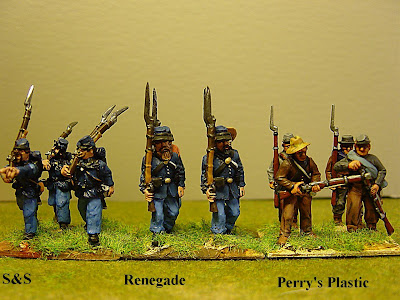 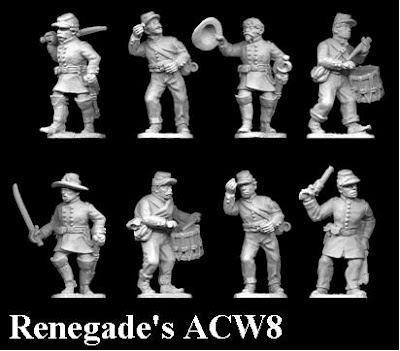 Renegade Miniature are offering some brilliantly cheap deals at the moment - 25mm metal figures for £0.49p each which is only slightly more expensive than Perry's plastics (£0.42p each). Its a long time since metal 25mm figures were this cheap and on average most metals cost at least £1 each, or in the case of Foundry, around £2 each. But you need to buy Renegade's Regiment deals and, as you will see, there is a sting in the tail.

Firstly, the figures. These are the top two photographs. Nice and crisp castings and very easy to paint. I painted this battalion in about four hours. The mouldings for the command are less crisp than the rank and file and need a little work (perhaps the moulds themselves from which the figures come are ageing) but otherwise very nice figures. I bought three "Regiments" of 24 figures but because I want four battalions of 16 I also bought a bag of the command ACW8 (see lower picture).

Lastly, please look at the third picture - size comparison. Sash and Saber and Perry's look fairly similar in size but Renegade are massive. 30mm to the brow of the head. As they are probably not mixeable together, I will keep all these Renegade figures together in the same brigade.

If I was starting all over again (and I certainly am not) I would be tempted to buy all my figures from this company as these bargain prices won't be around for too long.
Posted by Painted Soldier at 10:08