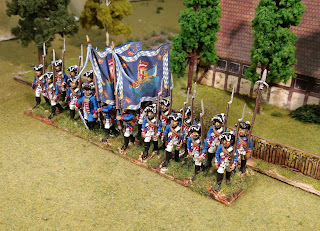 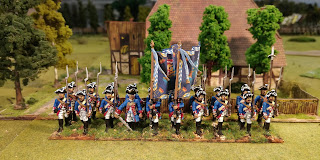 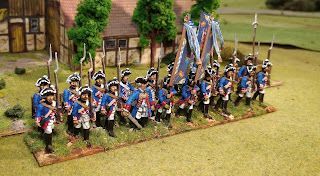 I have a fascination with the Electorate of Palatine (in German Kurfürstentum Pfalz ) probably because it disappeared in 1777 when it went into personal union with Bavaria. The reasons why are complicated and are best investigated via wiki if you are interested. Meanwhile in the SYW Pfalz/Palatine was allied to France via the happy method of being paid to be allies. Thus a large percentage of this Protestant army served with the Catholic French army with great reluctance while the balance went off to serve with the Reichsarmee. The contract ended in 1759 and the French were not too upset as they had by then managed to reconstruct a Saxon army to replace it.


This regiment had been the Garde Grenadiers but mitres were removed in 1757 and the name changed to Garde zu Fuss. The second battalion joined the ten battalion force serving with the French when one of those ten surrendered in 1758.

I have used Black Hussar Prussian figures although really the cuffs were larger. For grenadiers, when I get round to them, I will probably use Eureka's late Saxon grenadiers in bearskin.

As for the uniform blue I have made it lighter than that uses for Hesse or Prussia. There is no evidence for this just an entirely personal suspicion. The glorious flags are from Frederick Aubert who can be contacted on our FB group. I have used two Kompaniefahnen because that was the convention although they could have had one Kompaniefahnen and one Leibfahne. For the drummers, there is no information so I have just used the Bavarian system, which was drummers dressed as for the other ranks with arm lace. The hat lace (shark's teeth) is very complicated to paint and requires a good deal more patience than I have!

I would like to say that I will paint all ten battalions but I suspect I will just manage to do one brigade.

Posted by Painted Soldier at 20:18