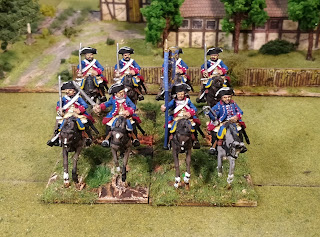 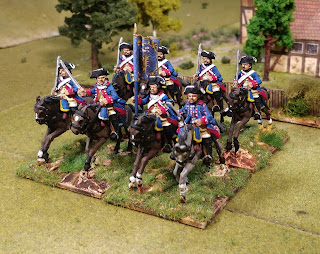 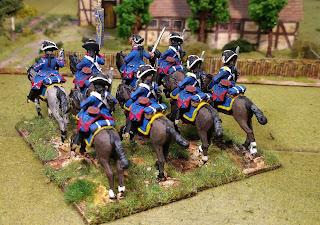 I have long moaned about the paucity of decent Frenh cavalry figures. My fall back position, until Black Hussar gets around to this subject, would have been Front Rank but I really don't like their French cavalry figures although there is a choice of good mounted officers.

Imagine my surprise when I saw that the Perry's had added to their AWI range some Spanish colonial dragoons. Looking closely at the figures on the pictures I though they looked possible. On the plus side, Perry do great horses and, if the headgear was really a tricorne, then maybe they would work.

The command needs some work unless you are happy for the officers to have gorgets, which they did not. Also you will have to remove the epaulettes but that is easy. Horses have bound tails but I can live with that. I had to fill in the front of the bugler's coat.

Rank and File: arrangement of musket straps is odd but acceptable. The worst thing is that they have gaiters not boots but you can hardly notice. The tricorne is a good shape!

I leave you to judge what you think. Personally I think they are fine and there is an easy solution for those wearing bearskins. Get the separate bearskin heads from Black Hussar (a choice of three styles) and replace the Perry ones.

As I also live in Aquitaine it's appropriate that this should be my first cavalry regiment.

Posted by Painted Soldier at 21:07