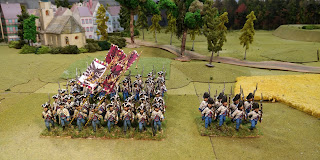 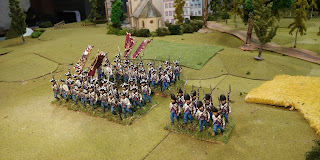 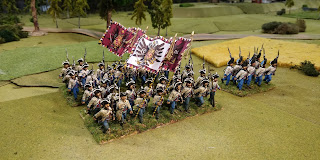 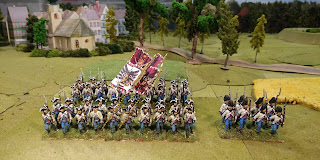 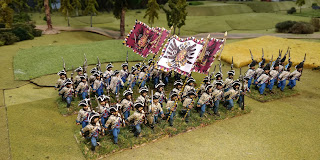 I am reworking these regiments and adding two grenadier companies which will be converged (in three pairs of two) to make grenadier battalions.

The other thing that I have done is to enable the use of the Austrian army in both the WAS and SYW. In the former the infantry formed in 4 ranks so I want to show a distinction. For the SYW (three ranks) the five bases of 4 are simply placed side-by-side (bottom 2 pictures). For the WAS (4 ranks) one base (which is split into two) is placed behind the end bases – shown in top 3 pictures. This reduces the frontage and shows an increase in depth for the extra rank. Six hundred men in 4 ranks will have a frontage of about 150 men whereas 600 men in 3 ranks has a frontage of about 200. After Kolin the Austrians were in 3 ranks.

I only have two regiments of Hungarians in my army so to be able to field a converged battalion of grenadiers I will need to add two companies of grenadiers from another regiment not present in my army. The Austrian method of converging grenadiers was quite different from the Prussian method. The Prussians system was grenadiers from two regiments (so 4 companies) in a permanent grouping that would only change if numbers fell too low through desertion or casualties. The Austrians, on the other hand, only tended to converge on the battlefield, or just prior to it, to create an elite for a short period of combat. Thereafter they returned to their parent battalions to wait the next emergency or battle. Sometimes they were not converged at all, for example at the battles of Lobositz and Prague. When they are not specified in an OOB then you can assume that grenadiers remained with their parent regiments. Mollwitz is another example – no grenadiers are mentioned so it is reasonable to assume they were within the battalions.

Posted by Painted Soldier at 13:44